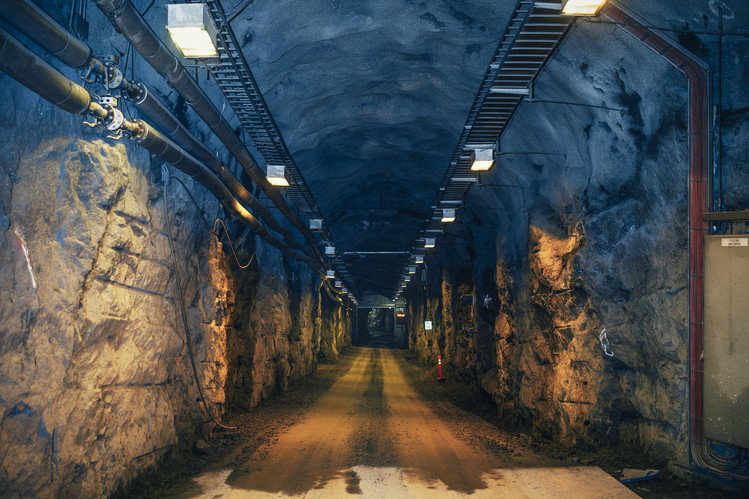 A drill and the beginnings of a tunnel at Onkalo, the nuclear-waste storage facility on Finland’s Olkiluoto island.

(by Zeke Turner, The Wall Street Journal) – OLKILUOTO, Finland – Finland has found what the whole world is looking for: A place to bury their most dangerous nuclear waste. It is 100 stories below ground.

From the U.S. to the U.K., Germany and Japan, plans to dig containers for highly radioactive nuclear fuel rods [nuclear waste] have hit political roadblocks or faced backlash from locals who don’t want toxic waste in their backyards. But Finland has been quietly breaking ground.

On this Baltic Sea island off the Finnish coast, the country’s two main nuclear-power companies have just begun digging the main chambers of a tunnel system they aim to complete by 2020 to safely house 6,500 tons of spent uranium for the next 100,000 years.

But building deep-rock storage bunkers isn’t just a challenge for engineers and scientists. Finland also stands out in how it has managed the project’s tricky politics, using financial incentives to frame the decision to host the site as a boon for locals rather than a perceived threat. …

Around the world, the majority of spent nuclear fuel—which remains radioactive for thousands of years—is stored in cooling pools at reactor sites or, once cooled, in steel casks sheathed in concrete. But neither method is a long-term fix, industry experts and advocacy groups say. The pools, which are filling up, can break down over decades, and both methods have raised concerns about the high costs and adequacy of security to protect them from disasters or potential attacks.

Scientists largely agree that deep-in-the-earth burial sites are the safest way to dispose of the most dangerous radioactive waste, though finding the right geological conditions can be expensive and time-consuming. Once the spent fuel rods are meticulously buried inside, these high-tech underground tunnel systems are backfilled and sealed shut. …..

Hans Forsström, senior adviser at SKB International, the consulting arm of Swedish nuclear waste-management company Svensk Kärnbränslehantering AB, said the Finnish plans were carefully designed “in a way that it won’t affect the people on the surface.”

“To get their trust is the difficult part,” he said.

Under a nuclear law passed in 1987, Finnish counties that host nuclear sites were given veto power to stop projects. This sent the message that no community would be forced to host a bunker. Then, the Finnish nuclear-waste company announced in 1992 that it was considering five potential sites. Politicians in those municipalities were left competing over who would get to host the project and collect property taxes from the company, according to Matti Kojo, an expert on Finland’s nuclear policy at the University of Tampere.

The municipality of Eurajoki, whose Olkiluoto Island is the site of two of Finland’s nuclear plants, won by offering the most land to the waste company and reasoning that the majority of Finland’s radioactive waste was already stored temporarily there. Construction of the site began in 2004. ….. Researchers in Finland are constructing a massive underground tomb for nuclear waste. When nuclear fuel is no longer useful for generating power, it is still dangerously radioactive for thousands of years. The Onkalo facility is designed to store this waste for at least 100,000 years. Meanwhile, the nuclear plants and the repository have come to reap the municipality €16 million ($17.2 million) in annual real-estate tax revenue from the nuclear industry—a hefty sum, given Eurajoki’s total budget of €65 million.

That tax injection has eased many of the concerns Eurajoki’s 9,300 residents may have once had over hosting the site. Between 1984 to 2008, the percentage of residents who thought that nuclear fuel rods couldn’t be stored safely underground dropped from 60% to 34%, according to a survey by Mr. Kojo of the University of Tampere.

The money has paid for a new library, a senior home, two day-care centers, hiking trails, a hockey rink, a Finnish baseball field, and renovations for local schools and a historical mansion owned by the municipality. It also allowed the municipality to levy income tax at 18%, the third-lowest in Finland.

Now politicians and nuclear-power operators elsewhere are looking to Eurajoki for inspiration. “From Japan, we have had I don’t know how many delegations…maybe hundreds,” said Jorma Aurela, the chief engineer in Finland’s ministry of economic affairs.

But Finns say their remedy doesn’t only boil down to purchasing local acquiescence. Jussi Heinonen, the director of the Nuclear Waste and Material Regulation department at Finland’s nuclear-safety regulator Säteilyturvakeskus, or STUK, says Finns’ high level of trust in industry experts and the government sets the country apart.

Finland never experienced the political backlash against nuclear power that has long plagued Germany, where protests in the 1970s gave rise to the country’s Green party. In 2011, after the Fukushima disaster, Chancellor Angela Merkel decided to phase out nuclear power in the country by 2022.

“Finnish people—maybe it is the weather outside—we are very practical,” said Pasi Tuohimaa, a spokesman for the Finnish utility Teollisuuden Voima Oyj, or TVO.

Lawmakers in Germany have given themselves until 2031 to find a place to dig, and U.S. scientists are waiting to see whether the Trump administration will revive the Yucca mountain project or start a new search altogether.

Meanwhile, the ballooning global stockpile of spent nuclear fuel—266,000 tons of spent uranium fuel were in temporary storage at the end of 2015, according to the International Atomic Energy Agency in Vienna—risks billions in costs for taxpayers and companies until final waste storage is built.

“The technological solutions are largely in place, which is shown by the Finns,” said Irina Gaus, the director of research and development at Switzerland’s National Cooperative for the Disposal of Radioactive Waste. “Society has to decide how to deal with the waste.”

1. a) How deep in the ground will Finland’s two main nuclear-power companies bury their nuclear waste?
b) When is the storage facility expected to be completed?
c) For how long will the nuclear waste be secure in this location?

2. a) What is the location of the storage tunnels?
b) How was that location chosen? Be specific.
c) List the benefits the 9,300 residents of the town have received so far.

3. The storage facility in Finland will hold 6,500 tons of spent uranium. What amount of nuclear waste was in temporary storage worldwide at the end of 2015?

Some Finnish environmental activists have voiced reservations about the project, calling for more studies before construction of the underground storage continues.

“Even the hardest bedrock we have on earth, which is here, will be cracked” during the ice ages expected in the next 100,000 years. Over that long stretch of time, “we can’t be sure that the waste wouldn’t leak with groundwater into the Baltic Sea.”

Whether you support or oppose the use of nuclear energy, the reality is, there is a lot of waste from nuclear power plants stored in temporary facilities.

From an Institute for Energy Research report (under “Background” below):

Geological isolation is the only viable long-term disposal solution currently available. This means storing the wastes in highly stable geologic formations that have remained seismically inactive. Billions of dollars have gone into building a permanent storage facility for high-level radioactive wastes at Yucca Mountain, Nevada. The facility, run by the Department of Energy, was to have opened in 1998, but the project is behind schedule. Even after construction is complete, however, political opposition from Nevada’s citizens and politicians may keep the facility’s doors shut.

What do you think?
a) Are more studies necessary before implementing Finland’s project to store nuclear waste?
b) What should the U.S. do with our nuclear waste? Yucca Mountain? Would your answer be different if you lived in Nevada? Explain your answers.
c) Does this change your mind about the use of nuclear energy?

NUCLEAR POWER IN THE U.S.