(by Trenton Daniel of Associated Press at YahooNews.com) PORT-AU-PRINCE, Haiti – Michel Martelly, a popular singer known by the stage name “Sweet Micky,” was officially declared the next president of this earthquake-devastated country, election officials said.

The announcement ends a long, drawn-out election that began Nov. 28 and was marred by fraud and other irregularities, several days of rioting and numerous delays.

After election officials released preliminary results on April 6 showing that Martelly, 50, defeated his opponent with nearly 68 percent of the vote, Manigat said she wouldn’t contest the results.

Since then, Martelly has spoken about the need for reconciliation in this bitterly divided nation as he’s sought to put together a transition team. On the campaign trail, he called for free education for all children, a renovation of the agricultural sector, and the restoration of the disbanded army.

Martelly, a master of Haiti’s compas music before he became a presidential candidate, is to be inaugurated on May 14. As Haiti’s newly elected president, he faces enormous challenges.

The new leader will be tasked with leading a multibillion-dollar reconstruction effort following last year’s magnitude-7 earthquake, which claimed 300,000 lives and displaced hundreds of thousands of Haitians. He also has to find a way to stem a deadly cholera epidemic.

In addition to the presidency, election officials also released final results for legislative elections, giving the political party of outgoing President Rene Preval a majority in the Senate. This could prove to be another hurdle for Martelly: Parliament must approve his pick for prime minister. 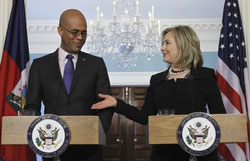 On the same day that Haitian officials announced the final results, Martelly met with U.S. Secretary of State Hillary Clinton (see photo) as part of a three-day visit to Washington. He said he spoke with Clinton about his three priorities: education, finding homes for people living in tents, and restarting Haiti’s agricultural sector.

In a news conference, Martelly admitted he had huge challenges ahead of him. He called reconstruction efforts “despairingly slow.” He also stressed the need to tackle the cholera epidemic that has claimed more than 4,700 lives since October. He warned that the coming hurricane season could spread the disease countrywide.

“Now he has a chance to lead, and we are behind him,” said Clinton, Martelly at her side. “He is committed to results. He wants to deliver for the Haitian people. And we are committed to helping him do so.”

Haiti’s difficult recovery from the earthquake and years of instability and poverty was underscored Wednesday when 53 [Democratic] members of the U.S. Congress wrote to Clinton urging her to work with the Haitian government to provide rapid support for the displaced people lacking adequate shelter, water, sanitation and security.

Thirty-eight percent of resettlement camps still lack regular water supplies, the [Democrats’] letter said, adding that the percentage had improved little since August. Nearly a third of camps don’t have toilets. Where toilets are provided, each one is shared by an average of nearly 300 people.

“The shelter installations in which displaced Haitians live are progressively deteriorating,” the members of Congress wrote. The lawmakers urged Clinton “to work with Haitian authorities and our international partners to ensure a speedy, short-term response.”

Copyright ©2011 Associated Press. All rights reserved. Reprinted here for educational purposes only. The information contained in this AP news report may not be published, broadcast, rewritten, or redistributed without the prior written authority of the Associated Press.  Visit news.yahoo.com/s/ap/20110421/ap_on_bi_ge/cb_haiti_elections. for the original post.

1. Who is Michel Martelly?

3. What two major problems/projects will Mr. Martelly have to tackle immediately?

4. What does Mr. Martelly say his three main priorities will be as president?

5. What challenge does Mr. Martelly face for appointing a prime minister?

6. Read two reader responses to the article. With whom do you agree? Explain your answer.

For background on Haiti, go to the CIA World FactBook website.