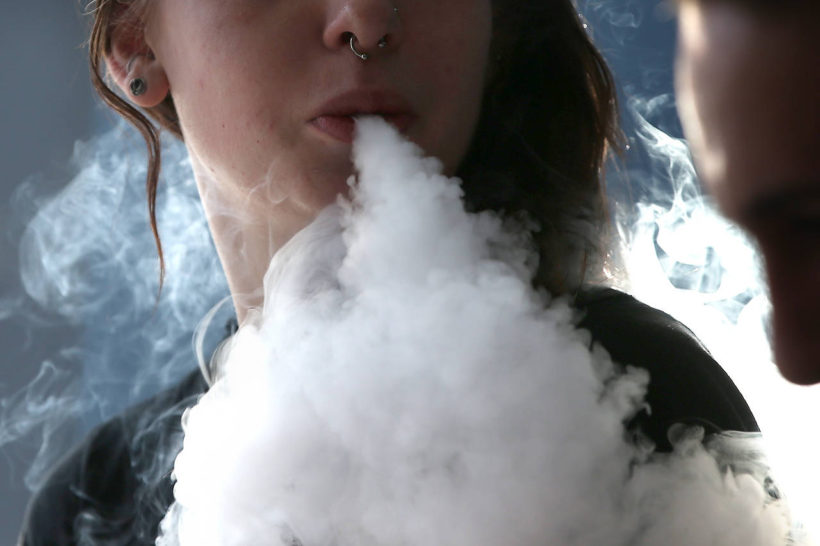 (by Mike Esterl, The Wall Street Journal) – Electronic cigarette use tripled and hookah use doubled among U.S. teenagers in 2014, even as fewer of them light up traditional cigarettes, according to a government survey published Thursday.  Three times as many middle school and high school students used e-cigarettes in 2014 than in 2013, according to an annual survey on youth tobacco use conducted by the CDC and FDA.

The number of high school students who said they had vaped at least once in the past 30 days tripled in one year, from 4.3% to 13.4% for high school students and from 1.1% to 3.9% for middle school students. They also tried hookahs, or water pipes, as often as traditional cigarettes for the first time, according to the CDC. Cigarette usage has been declining among teens for decades.

The findings from the nationwide survey of more than 20,000 high-school and middle-school students could accelerate federal efforts to increase oversight of alternative nicotine products.

The Food and Drug Administration (FDA), which has regulated traditional cigarettes since 2009, last year proposed regulations for cigars, e-cigarettes and hookahs that have yet to be implemented.

“These staggering increases in such a short time underscore why the FDA intends to regulate those additional products to protect public health,” Mitch Zeller, head of the agency’s Center for Tobacco Products, said in a statement Thursday.

E-cigarettes are battery-powered devices that heat nicotine-laced liquid, turning it into a vapor. They are widely viewed by tobacco researchers to be less harmful than traditional cigarettes, which release dozens of carcinogens through combustion.

But health authorities say it is too early to know the long-term health effects of e-cigarettes and warn that nicotine can adversely affect brain development among adolescents.

“Nicotine is dangerous for kids at any age,” CDC Director Tom Frieden said in a statement.

E-cigarettes are available in dozens of flavors including fruit and candy, unlike traditional regulated cigarettes, where menthol is the only permitted flavor. They are also advertised on television, unlike traditional smokes, which haven’t been allowed in TV commercials since 1971.

Hookah use, which is typically done in groups, rose to 9.4% from 5.2% among high-school students over the period, and to 2.5% from 1.1% among middle-school students, according to the CDC.

The CDC has warned that hookahs are at least as toxic as cigarettes. Hookahs typically feature a head, metal body, water bowl and a hose with a mouthpiece. The large contraption is used for smoking tobacco that comes in different flavors such as mint, licorice and cappuccino.

1. By what percents have the numbers of high school and middle school students who used e-cigarettes increased over the past year, according to a survey by the CDC?

2. What action might the federal government take as a result of the survey?

4. Why are health officials warning against the use of e-cigarettes?

5. How dangerous are hookahs, according to the CDC and Dr. Harold Farber of the Texas Children’s Hospital? (see “Background” below the questions)

6. David Dobbins, chief operating officer at the anti-tobacco group Legacy said, “People can differ about the appropriateness of e-cigarettes for adults but I don’t think anyone disagrees on the appropriateness of giving them to children.” He added, “It’s up to the White House and HHS to make sure this regulation gets out as quickly as possible.”
The proposed rule would ban the sale of e-cigarettes to people under the age of 18 and require FDA approval of new products. Public health advocates have also been pushing for a ban on flavored products, television advertising and internet sales, which they say attract children.
The biggest concern is that the long term effects of these products are not known.
Consider this: in the 1930s-40s, cigarette smoking was not regarding as dangerous to a person’s health. What do you think:
a) Should the sale of e-cigarettes / vapes be banned for people under the age of 18?
b) Should the FDA regulate these products?
Explain your answers.

From Forbes.com and a Reuters report at Fortune.com:

“E-cigarettes are the hot new thing,” said Dr. Harold J. Farber, a pediatric pulmonologist at Texas Children’s Hospital. “They are hip, they are cool, they have candy flavors that appeal to young kids, and they are amazingly discreet.” They also contain one of the most addictive substances that exists (nicotine), and e-cigarette manufacturers are doing a great job of marketing these products to kids, Farber said.

Yet there is almost no regulation to stop them. Most states ban e-cigarette sales to minors, but that’s clearly not stopping teens from getting them. The FDA proposed regulations last year but has generally been dragging its feet for years, said Farber, who calls the agency’s sluggishness on the issue “unconscionable.” Further, the proposed regulations do not limit advertising or flavors such as bubblegum, cherry or chocolate that attract kids.

“There is always an opportunity for delay, but I think it will be much harder for the administration to exercise that opportunity now,” said David Dobbins, chief operating officer at the anti-tobacco group Legacy. “It’s up to the White House and HHS to make sure this regulation gets out as quickly as possible.”

The proposed rule would ban the sale of e-cigarettes to people under the age of 18 and require FDA approval of new products. Public health advocates have also been pushing for a ban on flavored products, television advertising and internet sales, which they say attract children. The agency has said the rule would be the foundational first step in a range of potential future regulations.

The good news in this CDC report…the continuing drop in cigarette smoking among high school students, falling below 10% for the first time (9.4%). Middle school cigarette smoking remained steady at 2.5%. But the combination of e-cigarettes and increasing use of hookahs threaten to undo the progress made in reducing youth cigarette smoking.

“We had been seeing tobacco use substantially dropping over the last 20 years and now with the promotion of these new innovative products, we’re starting to see their use rapidly rise,” Dr. Farber said. “Most, if not all, kids know about them, and a great many have tried it or are trying it.”

At least 43 states already have laws that restrict sales of e-cigarettes to minors and some are working to incorporate e-cigarettes into existing clean air acts that prohibit smoking in public places.

Hookah smoking nearly doubled among high school students, moving from 5.2% to 9.4%. Among middle schoolers, it increased from 1.1% to 2.5%.

“With the hookahs, you have not just the tobacco but the charcoal to keep it burning, and you have to inhale fairly deeply and hold it longer,” Dr. Farber said. “So it’s estimated that with one hookah session, you could be inhaling the amount of tobacco equivalent to what you would get from about 100 cigarettes.”