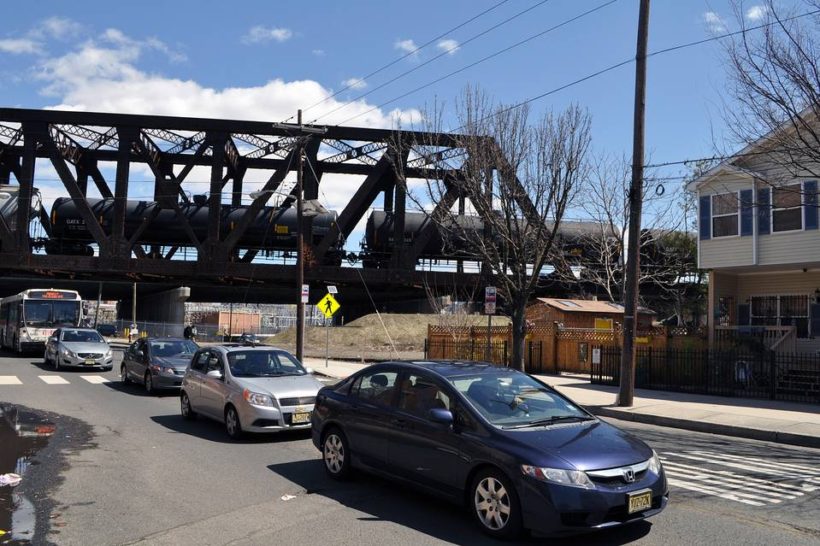 (by Russell Gold, The Wall Street Journal) – Imagine a mile-long train transporting crude oil derailing on an elevated track in Jersey City, N.J., across the street from senior citizen housing and 2 miles from the mouth of the Holland Tunnel to Manhattan.

The oil ignites, creating an intense explosion and a 300-foot fireball. The blast kills 87 people right away, and sends 500 more to the hospital with serious injuries. More than a dozen buildings are destroyed. A plume of thick black smoke spreads north to New York’s Westchester County.

This fictional – but, experts say, plausible – scenario was developed by the Federal Emergency Management Agency (FEMA) in one of the first efforts by the U.S. government to map out what an oil-train accident might look like in an urban area. Agency officials unveiled it as part of an exercise last month to help local firefighters and emergency workers prepare for the kind of crude-by-rail accident that until now has occurred mostly in rural locations.

“Our job is to design scenarios that push us to the limit, and very often push us to the point of failure so that we can identify where we need to improve,” said FEMA spokesman Rafael Lemaitre. He said a second planning exercise is scheduled in June in a suburban area of Wisconsin.

Jersey City’s mayor, Steven Fulop, said the drill showed participants that they need to improve regional communication to cope with an oil-train accident.

“It would be a catastrophic situation for any urban area and Jersey City is one of the most densely populated areas in the entire country,” he said. Railroad records show that about 20 oil trains a week pass through the county that contains Jersey City, and Mr. Fulop said the trains use the elevated track studied in the FEMA exercise. Even more trains hauling crude pass through other cities, including Chicago, Philadelphia and Minneapolis.

Rail shipments of oil have expanded to almost 374 million barrels last year from 20 million barrels in 2010, according to the U.S. Energy Information Administration. Although low crude prices and safety issues have recently led to small declines in such traffic, trains carrying volatile* oil from North Dakota and the Rocky Mountains continue to rumble toward refiners on the East, West and Gulf Coasts. [*volatile means: likely to become dangerous or out of control]

Regulators worry more about a serious accident in a densely populated area. “The derailment scenario FEMA developed is a very real possibility and a very real concern,” said Susan Lagana, a spokeswoman for the U.S. Department of Transportation. She said her agency was considering emergency orders to address such risks.

Firefighters at the FEMA workshop in Jersey City discussed the difficulty of battling a crude-oil fire, which can be explosive and hard to extinguish. One problem: limited supplies of the special foam required to smother the flames.

Jordan Zaretsky, a fire battalion chief in nearby Teaneck, N.J., who attended the presentation, said the scale of such an accident was sobering. “This isn’t a structural fire that we can knock down in an hour or two,” he said. “This is something we’d be dealing with for days.”

Ideas discussed at the workshop included devising a system to allow local officials to know when an oil train was passing through, developing public-service messages to tell residents what to do in case of a derailment and providing more firefighters with specialized training.

There have been many calls for changes to how crude oil is handled on the railroads, including new speed limits for trains and requirements to treat the crude oil to make it less volatile.

Earlier this month, the chairman of the National Transportation Safety Board (NTSB) urged the rail industry and federal regulators to move more swiftly to replace existing tank cars with ones that would better resist rupturing and fire.

A spokesman for the American Petroleum Institute, a trade group for oil producers, said the companies are committed to “greater efforts to prevent derailments through track maintenance and repair, upgrades to the tank car fleet, and giving first responders the knowledge and tools they need.”

The Association of American Railroads recognizes that “more has to be done to further advance the safe movement of this product,” a spokesman said.

FEMA chose for the location of the derailment scenario a stretch of track adjacent to the New Jersey Turnpike and about a mile from downtown Jersey City. One side of the track is industrial and includes an electric substation. The other side is residential.

Edgardo Correa, a 59-year-old retired sanitation worker, lives in a house close to the tracks in Jersey City. He said he was aware that trains full of crude pass by his home. “It’s an alarming thing,” he said.

—Joe Jackson contributed to this article.

1. a) What is FEMA?
b) What was FEMA attempting to do in Jersey City, NJ recently?

2. Why did FEMA choose this location for its exercise?

3. Why is FEMA conducting these exercises?

4. What did participants learn from the drill, according to Jersey City mayor Steven Fulop?

5. What challenges do firefighters face in fighting crude oil fires?

6. What suggestions did firefighters offer at the FEMA workshop?

7. The dangers posed by transporting crude oil by train (as opposed to by underground pipelines) are due to the volatile nature of the crude oil and the chance that a train transporting crude oil derails. Earlier this month, the NTSB urged the rail industry and federal regulators to move more swiftly to replace existing tank cars with ones that would better resist rupturing and fire. What responsibility do you think railroad companies should have in preventing derailments?

FEMA -The Federal Emergency Management Agency (FEMA) is an agency of the U.S. Department of Homeland Security

The primary purpose of FEMA is to coordinate the response to a disaster that has occurred in the U.S. and that overwhelms the resources of local and state authorities.