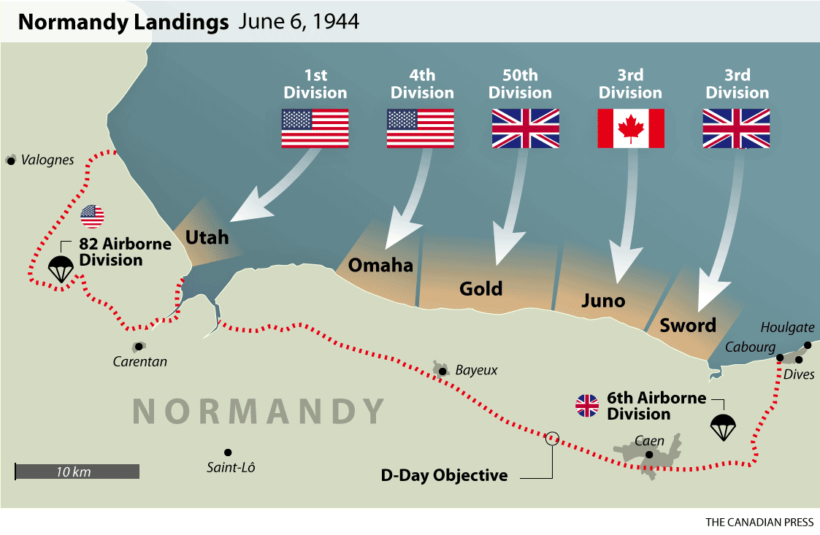 (by James Gordon, Daily Mail) – The planes that dropped 24,000 American, British, and Canadian troops into Normandy on D-Day have taken to the skies once again to commemorate the 75th anniversary of the mission that laid the foundations for Allied victory over the Nazis.

Twelves planes, including five C-47’s bearing the black and white invasion stripes of Operation Overlord, left Connecticut on May 19 for their journey across the Atlantic to northern France.

There, they joined 15 more planes that will drop 250 D-Day paratroopers to reenact what was the largest seaborne invasion in history.

On June 6, 1944, the planes dropped thousands of troops behind enemy lines in the middle of the night.  The ensuing battle for Normandy ultimately helped pave the way for Hitler’s defeat and bring the Second World War to an end. Operation Overlord was the codename for the Battle of Normandy which saw 1,200-planes take part in an airborne assault followed by an amphibious assault involving more than 5,000 vessels. The US, British, and Canadian paratroopers landed on French soil shortly after midnight and came in either by parachute or by glider.

13,000 paratroopers from the U.S. 82nd and 101st Airborne divisions along with British paratroopers — making for a total of about 24,000 combat jumpers landed in Nazi-occupied France.

The mission for the C-47s and gliders towed by the planes was to dropped the soldiers behind the Germans’ main lines with the objective of taking the town of St. Mere Eglise in order to secure key approaches to the beaches.

By the end of that day, nearly 160,000 troops had crossed the English Channel and landed in Nazi-occupied France and laid the foundations of the Allies victory on the Western Front, but there were enormous casualties too.

“This is our last chance to honor the members of the greatest generation while they’re with us,” Steve Lashley, director of communications for the D-Day Squadron said. “The 80th will be too late.”

“That’s why we’re doing this mission, we’re bringing history to life,’ said Andy Maag, who is flying a C-47 named ‘That’s All, Brother.’ [The trip, in which the aircraft had to make several stops to refuel – in Canada, Greenland and Iceland – took about a week.] The international event will honor the soldiers of World War II who liberated France and fought on to victory over the following year.

Next month’s event will see a gathering of volunteer pilots, crews and historic planes all come together, culminating on June 5 with the paratroopers landing in the same drop zones that were used in the June 6, 1944 invasion according to the Hartford Courant.

“It’s an extraordinary opportunity to honor our veterans and to teach new generations about America’s place in the world,” Placid Lassie pilot Eric Zipkin of Middlebury said.

…[On June 6], the plan once again is for the skies over southern England and Normandy to be filled with the aircraft and hundreds of paratroopers.

The [paratroopers participating in the reenactment will board] the aircraft in England before flying across the English Channel in formation before the parachute jump into the historic drop zones of Normandy.

The men will be wearing WWII style Allied uniforms and will jump using military round parachutes – mimicking those used in 1944. …

While most of the plane’s flight controls are 1930s technology, the latest navigation and communication equipment has been installed into the old cockpits to ensure the journey goes as smoothly as possible. Every aircraft it also equipped with life rafts and survival suits.

“This is dangerous,” said Len Roberto, a member of the board of directors of the Connecticut Air and Space Center told The Times. “It is not an easy journey in a 75-year-old airplane.”

In addition to honoring veterans, the squadron’s goal is to inspire young people to learn about American history and aviation as well as encouraging youngsters to explore careers in science, technology, engineering and mathematics.

Between June 2-9, 30 DC-3 and C-47 planes will come together at Duxford Airfield in the United Kingdom near Cambridge and then at Caen Carpiquet Airport in Normandy,

According to the organizers of Daks Over Normandy, the June 5 commemorative flight ‘will most probably be the very last large commemoration of this historic day,’ while some of those who took part in the invasion are still alive.

Published at UK DailyMail .com. Reprinted here for educational purposes only. May not be reproduced on other websites without permission from The Daily Mail.

1. For what reason were the allied paratroopers dropped into France the night before the amphibious assault began on D-Day?

2. How many U.S. paratroopers took part in Operation Overlord?

3. How many allied troops in total landed in Nazi-occupied France on D-Day?

4. For what reason are the 12 planes flying from the U.S. to Britain then France for the 75th anniversary of D-Day? (Why do it now?)

5. What is the purpose of the reenactment?

Check out some of the links and watch the videos under “Resources” below.

6. How does learning about D-Day inspire you?

7. D-Day is not part of the required high school social studies curriculum in many states. Teaching about World War II varies from state to state. It’s often up to the teachers to decide how much time they want to give to individual battles like D-Day. A teacher in North Carolina who spent about an hour and a half teaching about D-Day said if this wasn’t the 75th anniversary of the turning point in World War II, she wouldn’t devote that much time to it. (Too many other requirements she needs to fulfill.)
a) Consider the importance to the U.S. and the world of the allies winning the war, and the role D-Day played in making it possible. Why should every high school require teaching about D-Day as part of their curriculum?
b) Ask a parent and also a grandparent the same question.

CHALLENGE: Research one of the following. Explain the importance of the topic you researched:

For FAQs on D-Day, go to theddaystory.com.

Before TV was available to the whole country (beginning in the 1950s), people got their news from newspapers, the radio, and newsreels that were shown in movie theaters. Watch a newsreel about D-Day below:

This order was issued by Gen. Dwight D. Eisenhower to encourage Allied soldiers taking part in the D-day invasion of June 6, 1944. Almost immediately after France fell to the Nazis in 1940, the Allies planned a cross-Channel assault on the German occupying forces, ultimately code-named Operation Overlord.

Listen to President Franklin D. Roosevelt’s address and prayer to the nation on the night of D-Day below:
(Read FDR’s prayer.  Consider these questions about the prayer.)

From the CBS archives
A CBS radio broadcast details the Allies’ attack on Normandy as it unfolds on June 6, 1944:

Inflatable tanks? Read about how the allies fooled the Nazis with a “Ghost Army”