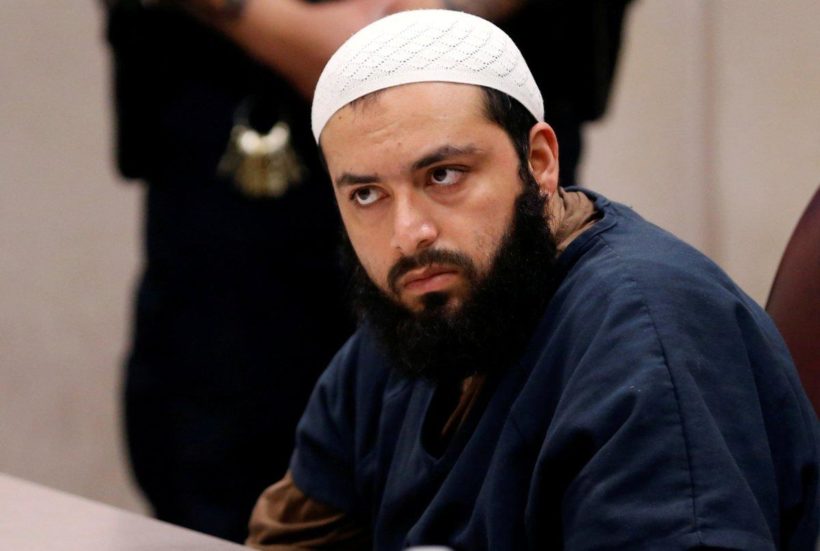 (from CBS News) AP – Terrorist bomber Ahmad Khan Rahimi was found guilty on Monday of detonating a shrapnel-packed explosive device that injured 30 people on a terrifying night on New York City streets in 2016.

The verdict by the Manhattan Federal Court jury came after a two-week trial of 29-year-old Rahimi, an Afghanistan-born man living in Elizabeth, NJ. The charges, including using a weapon of mass destruction and bombing a public place, carry a maximum punishment of life in prison. Sentencing is scheduled for Jan. 18. (The first day of Rahimi’s trial was delayed for about 40 minutes after he first refused to enter the courtroom — and then, once inside, ignored Manhattan Federal Judge Richard Berman’s instruction to sit down and remain silent.)

Prosecutors said Rahimi considered himself “a soldier in a holy war against Americans” and was inspired by the Islamic State group and al-Qaida to carry out the attacks in New York and New Jersey and was intent on inflicting as much carnage as possible with his homemade pressure cooker bombs.

“He designed it,” said Assistant U.S. Attorney Shawn Crowley in her opening argument. “He built it. He filled it with explosives and deadly shrapnel, and he planted it on the street.”

He was found guilty of all eight charges against him. The defense said it will appeal.

In his closing argument, Assistant U.S. Attorney Emil Bove described an unusually large amount of evidence that pointed to Rahimi. His fingerprints and DNA were found on bombs in the Sept. 17, 2016, attacks.

Dozens of videos tracked his movements as he dragged the bombs in suitcases through Manhattan streets, and they also captured the explosion at 23rd Street in the Chelsea neighborhood that injured 30 people. The second bomb didn’t detonate.

As a bomb squad investigator testified, prosecutors showed jurors a mangled, waist-high trash bin that was sent flying 120 feet across a busy street by the bomb. The government called it a miracle that nobody was killed by the explosive, which scattered ball bearings meant to serve as shrapnel.

If that wasn’t enough, Bove said, jurors could look at a small notebook that was on Rahimi when he was arrested two days after the attack following a shootout with police in New Jersey. The prosecutor said Rahimi’s written words provided a confession as he took responsibility for the bombings in a “claim of credit” for attacks that left him feeling proud. He still faces charges in New Jersey related to the shootout. He has pleaded not guilty to attempted murder of police officers.

Assistant public defender Sabrina Shroff did not deny evidence linking Rahimi to the 23rd Street bomb but asked jurors to question whether Rahimi really intended for the 27th Street bomb to go off. She urged the jury to acquit Rahimi of three charges that could result in a mandatory life prison sentence.

And she expressed compassion for those injured by the blast, some of whom testified during the trial.

“This is a difficult case for all of us because we are all New Yorkers,” Shroff said.

Prosecutors said Rahimi left his home before sunrise to plant a pipe bomb along the route of a Marine Corps charity race in Seaside Heights, New Jersey, an oceanside community. No one was injured in the explosion because the race had been delayed. It was then canceled.

Hours later, Rahimi went into Manhattan, where he was seen walking from Penn Station to the street locations where two bombs were placed.

The first bomb, hidden near a large trash bin, set off a blast that sent the 100-pound dumpster into the air, shattered windows, scattered bits of metal and caused people on the street to scream and flee the area.

A bomb at 27th Street was discovered and deactivated before it could explode. The following day, a homeless man and his friend alerted authorities after they found a backpack containing smaller bombs in a trash can near a train station in Elizabeth, New Jersey.

Assistant U.S. Attorney Andrew DeFilippis said in closing arguments that Rahimi had carried out a “cold and calculating” attack with a variety of explosive devices that included a backpack filled with seven bombs, some small enough to use like hand grenades.

The prosecutor said Rahimi could be convicted even if some bombs didn’t explode because the government only needed to prove that he took “substantial steps” to set off explosives.

Alluding to the numerous street videos jurors watched of Rahimi walking through Manhattan, DeFillipis reminded jurors that they had seen him take “step after step after step,” including after the 23rd Street bomb exploded.

He said Rahimi was seen “walking away so he wouldn’t get hurt while others bled.”

[Rahimi was arrested two days after the explosion after a shootout with police in Linden, N.J., where two officers were wounded when he shot them.  He was hit seven times by return fire.

He still faces attempted murder charges in New Jersey for the gunfight preceding his arrest.]

NOTE to students: Before answering the questions, read the “Background” and watch the video under “Resources” below.

2. a) What country is 29-year-old Ahmad Khan Rahimi from?
b) How does Rahimi view himself, according to prosecutors?

3. a) What charges were brought against Rahimi?
b) Of how many of the charges was he found guilty?

4. Describe the evidence brought against Rahimi.

6. For what reason did Rahimi’s lawyer ask the court to acquit Rahimi?

7. Rahimi is from Afghanistan. Why was he granted citizenship?

8. How the U.S. should deal with terrorists who commit attacks in the U.S.:

a) What do you think: Should terrorists be tried in criminal court, or – if a citizen as a traitor or if a non-citizen as an enemy combatant? Explain your answer.
b) Read the “Background” below the questions. Consider the practice of banishing or exiling a person from a country. One reader suggested that the penalty for committing a terrorist act in the U.S. should result in exile/banishment from the U.S. for the terrorist’s entire family as a way to deter terrorists from committing such acts. What do you think? Should Congress pass some type of law like this?
c) Ask a parent the same questions.

Rahimi is a naturalized U.S. citizen. Foreign nationals who wish to become citizens of the U.S. may do so through the naturalization process. Citizenship confers many advantages — the right to vote, protection from the government, access to certain jobs and benefits, and the option to hold public office (with the exception of President).

Included in the requirements to become a Naturalized Citizen:

Good Moral Character
A naturalization applicant must show good moral character during the five-year period prior to application (three years if married to a U.S. citizen or one year for certain military exceptions). Murder convictions are a permanent obstacle to naturalization, as are aggravated felony convictions. Certain criminal convictions in the five years prior to the application will bar naturalization.

A delay in the beginning of the Marines’ race in NJ spared all runners from injury. The bomb exploded as participants waited at the starting line.

Authorities said Rahimi also planted a bomb on W. 27th St. in Manhattan, which police discovered before it detonated.

“The fact that victims were not killed when one bomb exploded and another failed to detonate is miraculous,” NYPD Commissioner James O’Neill said.