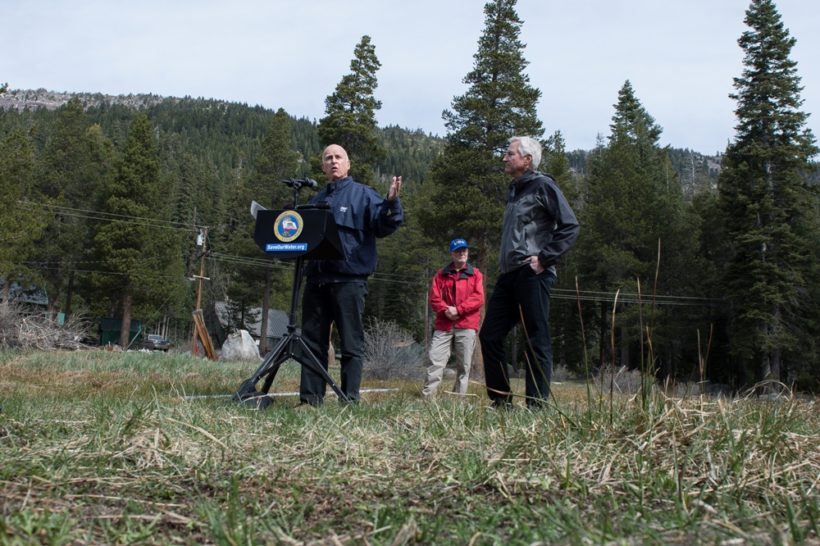 (CBS News) ECHO LAKE, Calif. — For the first time in California’s history the entire state will have to abide by strict water restrictions. Governor Jerry Brown announced an executive action Wednesday aimed at reducing water usage by 25 percent across the state.

The order comes as California enters its fourth year of a severe drought that is expected to persist into 2016. Statewide surveyors are seeing a record low snowpack of just six percent of normal. Californians depend on the melting snow to fill rivers and reservoirs, providing a third of the state’s water supply.

“We are standing on dry grass and we should be standing on five feet of snow,” said Brown, during a press briefing at Echo Summit in the Sierra Nevada. “We’re in a historic drought and that demands unprecedented action.”

The executive action calls for replacing 50 million square feet of lawns throughout the state with drought tolerant landscaping; requires campuses, golf courses and other large landscapes to significantly cut water use; and it’ll bar new homes and developments from watering “ornamental” grass on public street medians.

“People should realize we’re in a new era,” said Brown. “The idea of your nice little green grass getting lots of water every day, that’s going to be a thing of the past. We’re not going to change everything overnight but we are in a transition period. People have to realize that in many parts of California, they are living in a desert.”

Frank Gehrke has been surveying the snowpack for more than 30 years. He says he’s never seen certain parts of the mountain without snow.

Several of the state’s reservoirs are now at a third of capacity and the underground water supply is rapidly being depleted. Researchers say California will need 11 trillion gallons of water to recover from this drought.

The governor’s office says the goal of cutting water usage by 25 percent amounts to savings of approximately 1.5 million acre-feet of water over nine months – nearly as much as Lake Oroville.

Governor Brown says the water saving measures will be enforced through cease and desist notices and fines. The state will be providing financial assistance to help local agencies with the water reduction. …

Monday’s executive order is the latest action to be taken in response to the state’s drought. Last year California announced a drought state of emergency.

[The new mandatory water restrictions do not apply to farmers. They must instead submit a detailed drought management plan, which will have to include a plan for cutting back.]

1. List 8 facts found in the first two paragraphs of this article.

3. a) What is a reservoir?
b) How far depleted are some of California’s reservoirs?

4. How does the Governor plan to enforce his edict?

5. What will the reduction in water use be measured against?

“We have to understand why we are having this drought to begin with. There’s an 800-pound gorilla in the living room. It is high pressure system sitting on California for four years, deflecting cold air from the Arctic and pushing it into New York City and the Northeast. We have excess snowfall in the Northeast in part because it should have fallen in California,” Kaku said Thursday on “CBS This Morning.” Some meteorologists would say this is part of a natural cycle, he said. “It comes and goes over a period of years, maybe decades,” Kaku said. “But last month in Stanford University, some renegade meteorologist said, ‘No, it’s global warming.’ The combination of hot air and dry air is very unusual, and they were saying it’s man-made activity that’s driving this. This is controversial.”

Frank Gehrke, who has been surveying the snowpack for more than 30 years says he’s never seen certain parts of the mountain without snow.

Mr. Kaku says, “It [extreme weather] comes and goes over a period of years, maybe decades.”

NOTE TO STUDENTS: Many issues can be controversial. While you might not feel strongly about a certain topic, others around you might take a strong position on one side or the other. Learn to logically defend your position, and politely respect your neighbor’s point of view. And if your neighbor gets argumentative with you, remind each other that both sides need to be tolerant of the other’s point of view. The issue of manmade global warming is extremely controversial.

7. To fight the drought, the state will also spend more than a billion dollars to recycle waste water and fund desalination plants like the Carlsbad facility near San Diego. “Desalination sounds great. You essentially push water through a filter, and extract out the salt and, voila, you get fresh water,” Mr. Kaku said. “However, it is very energy intensive because you have to use oil to create the machines to drive the water through a filter.”
If the cost of desalination is affordable, do you think the coastal cities of California should use this method to obtain water? Why or why not?