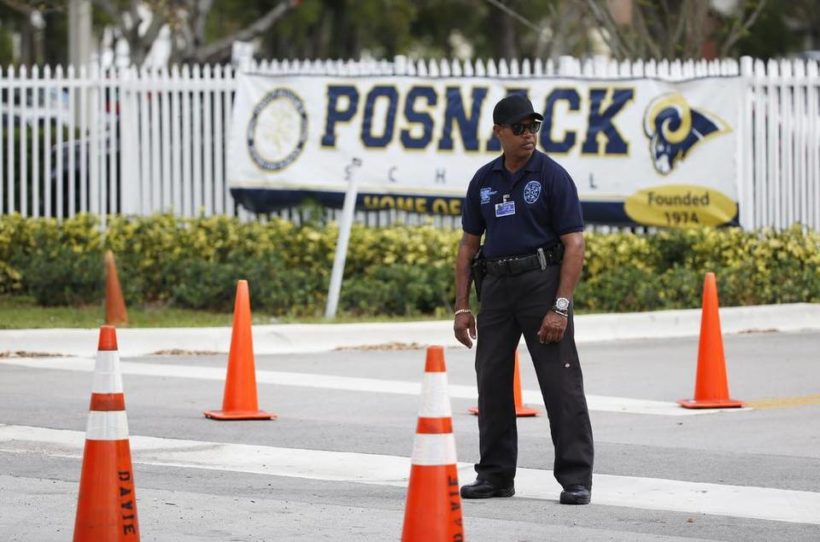 (by Mike Hayes, BuzzFeed) – Federal investigators believe the latest wave of bomb threats against Jewish centers and schools around the country was a coordinated attack perpetrated using “spoofing” technology, according to a liaison to the Jewish community who spoke with FBI investigators.

On Monday, bomb threats were called into 30 Jewish schools and community centers in at least 18 states, adding to a growing list of anti-Semitic incidents across the US this year. So far, nobody has been injured.

[The news comes as the FBI and law enforcement across the country continue to look into the spike in threats against the Jewish community. More than 100 threats in 33 states have been reported since January, and has resulted in students being pulled from schools. Jewish cemeteries have also been subject to vandalism.]. People gather in prayer amid the toppled headstones and damage at Mount Carmel Cemetery in Philadelphia on February 27, 2017.

Paul Goldenberg, the national director for Secure Community Network, [an initiative of The Jewish Federations of North America and the Conference of Presidents of Major American Jewish Organizations], told BuzzFeed News that those responsible “are leveraging technologies that have made the investigation more challenging.”

Goldenberg said investigators determined that some people calling in threats were using “spoofing,” a tactic where a call appears to come from a friendly or known source when it is in fact coming from somebody else.

He further added that the perpetrator used “voice masking technology.”

In one threat that targeted the David Posnack Jewish Day School in Davie, Florida, CBS Miami reported that police said someone who sounded like a woman with an altered voice called the front office and said a bomb would go off in “ten minutes to three hours.”

Goldenberg said the SCN has been “working 24/7” with the FBI since the threats started and he has been in regular contact with the FBI about the investigation.

[The U.S. Department of Homeland Security announced that it will heighten assistance to Jewish Community Centers.

“In light of the nature of the threats to Jewish Community Centers, I have directed DHS to heighten our outreach and support to enhance public safety,” Homeland Security Secretary John Kelly said Wednesday night in a statement. “The right to worship and commune within and across faiths is fundamental to the American experience and our way of life. DHS will continue to support communities across the country to preserve these fundamental freedoms.”

Michael Siegal, Chairman of the Secure Community Network (SCN), on a national conference call with reporters Thursday morning said, “There is no lack of cooperation among individuals at the highest levels of of the security community [in the Trump administration] or lack of concern and commitment toward our communities safety.”

Goldenberg and other researchers tracking these incidents say the numbers seen this year so far are unprecedented.

“You can’t even compare it,” Goldenberg said. “I have been in business for two decades, and we have never seen a number at this level in a short period of time.”

The FBI and the Justice Department Civil Rights Division said they are investigating the threats as possible civil rights violations.

“The FBI will collect all available facts and evidence, and will ensure this matter is investigated in a fair, thorough, and impartial manner,” an FBI spokesperson said. “As this is matter is ongoing, we are not able to comment further at this time.”

[Goldenberg said that while the calls have been difficult to investigate, he said he is confident based on the resources invested by law enforcement that the perpetrators will be caught.]

Reprinted here for educational purposes only. May not be reproduced on other websites without permission from BuzzFeed.

1. How many Jewish schools and community centers received bomb threats on Monday?

2. In how many states have Jewish schools and community centers been threatened since January 1st?

3. What two tactics did the perpetrators use when calling in the bomb threats?

5. In addition to bomb threats, what other heinous anti-Semitic acts have been committed recently?

6. What step did the DHS Secretary take this week to address these growing threats?

7. What is unprecedented about the threats?

8. Paul Goldenberg, the national director for Secure Community Network, said the technologies the perpetrators are using have “made the investigation more challenging.” Why is Mr. Goldenberg confident that they will be caught, despite this challenge?

On Tuesday night in a joint session to Congress, President Trump opened his speech by addressing the threats/attacks that occurred during his first month in office.
“Recent threats targeting Jewish Community Centers and vandalism of Jewish cemeteries, as well as last week’s shooting in Kansas City, remind us that while we may be a nation divided on policies, we are a country that stands united in condemning hate and evil in all its ugly forms,” Trump said.

Watch President Trump’s comments at the beginning of his address to congress on Feb. 27: