(by Stephen Dinan, WashingtonTimes.com) – The 112th Congress gaveled open Wednesday with Republicans taking control of the House and immediately rewriting the chamber’s rules, making it easier to cut spending and taxes, harder to add new spending, and more open to voters who want to keep tabs on what lawmakers are doing. 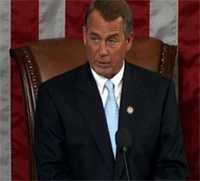 The rules changes, spearheaded by newly elected Speaker John A. Boehner (see photo at right), mark a sharp departure from recent years, and pave the way for the Republicans to pass bills that extend the Bush-era tax cuts, slash government spending and repeal Democrats’ health care law – at least in the House.

“Hard work and tough decisions will be required of the 112th Congress. No longer can we fall short. No longer can we kick the can down the road. The people voted to end business as usual, and today we begin carrying out their instructions,” said the Ohio Republican, who leads his party’s biggest House majority in decades by a margin of 242-to-193.

He also acknowledged the “great deal of scar tissue” he said has built up over partisan fights, presaging the head-butting he and his House colleagues will likely do over the next two years with the Senate, which also convened Wednesday as Vice President Joseph R. Biden Jr. swore in 35 new and returning members, leaving Democrats in control, but with a much weaker 53-47 majority.

[Boehner was elected speaker with 241 votes. Former House Speaker Nancy Pelosi, D-Calif., now the minority leader, garnered 173 votes from the 193 Democrats. About 20 members of her greatly diminished caucus voted for other Democrats… Moderate Democrats have complained that Pelosi’s leadership contributed to the party’s historic losses in last year’s election.]  Both the House and Senate were packed for the ceremonial parts of the day, including the election of Mr. Boehner as speaker, which saw each House member stand individually and announce his vote by name.

But just hours later, the House viewing galleries were almost empty, and only a few members were on the floor as the debate began on the substantive agenda of the day, which included major rules changes that govern both spending and House operations.

On Thursday, the House will conduct a reading of the Constitution, which Republicans said is meant to underscore the limits the founding document placed on Congress.

One of the new House rules requires that every bill lawmakers submit for consideration be accompanied by a statement in the Congressional Record pointing to a specific constitutional power that would justify the proposed law.

Another new rule requires that bills be available online for 72 hours before lawmakers vote on them, which Republicans said will give voters the chance to read legislation and weigh in with their views.

But the biggest changes may be on the budget side.

[Under Democratic control, a so-called “pay as you go” budget rule required most bills that increased spending or cut taxes to be offset with spending cuts or tax hikes in other areas. The new rule instituted Wednesday says only spending cuts can be used to offset spending increases-a “cut as you go” rule that takes tax increases off the table. It also allow taxes to be cut even if their cost isn’t covered by spending reductions.

In practice, the impact of those rules will be limited, because they don’t apply to the Senate, and spending and tax legislation has to pass both chambers. But the rules underscore a dramatic shift from decades in which budget hawks from both parties tended to view both spending cuts and tax increases as necessary to tackle mounting deficits and debt.]

The new rules also would streamline the process for repealing the new health care law by exempting the repeal bill from budget requirements. …..

[Among other criticisms,] Democrats also blasted Republicans for announcing that amendments will not be allowed to the first major bill the House will debate, to repeal the health care law. Republicans had promised a more open process, but they said health care repeal was an exception, since the issue has already been repeatedly debated.

One key test for leaders in both chambers will be how well they are able to keep their troops in line.

Mr. Boehner survived his first test, winning support for speaker from all 241 Republicans who voted Wednesday.

But former Speaker Nancy Pelosi didn’t fare as well. Nineteen Democrats defected on the vote, with 18 voting for one of several other Democrats and one voting “present.” It’s the worst showing for a party caucus’ nominee since 1923, and highlights simmering tensions after House Democrats’ disastrous showing in the November elections.

A Democratic aide said the vote was only “symbolic” and said House Democrats have taken steps to make their caucus more open to dissenting views. Still, the aide said voting against Mrs. Pelosi could be seen as a blow against party unity that would not sit well with some groups central to the party, including unions and minority rights activists. …..

Copyright 2010 The Washington Times, LLC.   Associated Press.  Reprinted from the Washington Times for educational purposes only.  Visit the website at washingtontimes.com.  NOTE: First brackets in para. 5 from washingtonexaminer.com and second brackets – paragraphs 11 and 12 are from wsj.com.

NOTE: In the November 2010 elections, the Republican Party gained the largest number of seats won by either party since 1948 and the largest in a midterm election since 1938.

2. List the three changes Republicans made to House rules yesterday.

3. What will the new rules pave the way for Republicans to do in the House of Representatives?

5. a) Describe the two rules that Republicans added as requirements for any bill now submitted for consideration.
b) What do you think of these new rules? Explain your answer.
c) Ask a parent the same question.

6. Paragraph 14 state: “Democrats also blasted Republicans for announcing that amendments will not be allowed to the first major bill the House will debate, to repeal the health care law. Republicans had promised a more open process, but they said health care repeal was an exception, since the issue has already been repeatedly debated.”
With which party do you agree? Explain your answer.

ON THE SPEAKER OF THE HOUSE:

Go to speaker.gov for information on new Speaker of the House John Boehner.

Read Speaker Boehner’s biography at johnboehner.house.gov/Biography. (Click on “Issues” for links to where Speaker Boehner stands on important issues of the day.)

Watch new Speaker of the House, Rep. John Boehner’s opening remarks to the 112th Congress below: