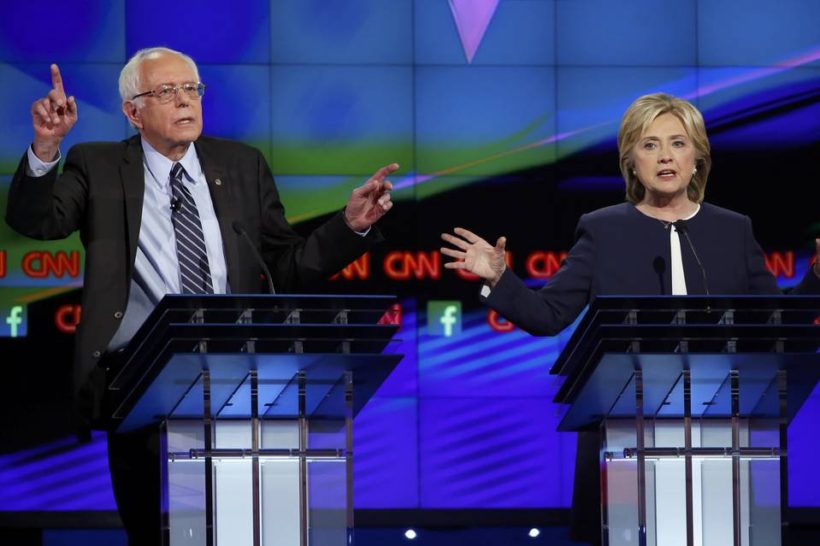 (by Peter Nicholas, The Wall Street Journal) – Democratic presidential candidate Bernie Sanders is drawing sharper distinctions with front-runner Hillary Clinton, casting her policy reversals over the years as a character issue that voters should take into account when they evaluate the Democratic field.

Sen. Sanders of Vermont, in an interview with The Wall Street Journal on Wednesday (Nov. 4), also said the federal investigation of the security surrounding Mrs. Clinton’s private email account is appropriate.

In the Democratic debate last month, Mr. Sanders said voters were “sick and tired” of the focus on Mrs. Clinton’s “damn emails.” Afterward, many Democrats and political analysts said that he had appeared to dismiss her use of a private email account and server in her four years as secretary of state.

Mr. Sanders’s pointed comments mark a turning point in what has been a polite Democratic contest. When he entered the race in the spring, Mr. Sanders barely mentioned Mrs. Clinton by name. When he did, it was merely to spell out plain-vanilla differences over policy.

But the dynamics of the Democratic race are changing with the Iowa caucuses only three months away, and Mr. Sanders is now questioning Mrs. Clinton’s convictions and willingness to take on tough policy fights that await the next president.

Mrs. Clinton’s campaign declined to comment on Mr. Sanders’s remarks on Wednesday. [But released a statement on Thursday: see “Background” below] …

On the issue of Mrs. Clinton’s emails, Mr. Sanders didn’t say he regretted his debate remarks. “You get 12 seconds to say these things,” he said of the debate setting. “There’s an investigation going on right now. I did not say, ‘End the investigation.’ That’s silly.…Let the investigation proceed unimpeded.”

Mr. Sanders said he has long-held positions on issues that weren’t always popular. Asked about Mrs. Clinton’s recent announcement that she opposed a Pacific trade deal she had once backed, among other changes in position, he said that consistency on such issues “does speak to the character of a person.”

He also said that in 2002 he voted against authorizing the U.S. invasion of Iraq, a measure that Mrs. Clinton supported as a New York senator.

“It is important to see which candidates have the courage to cast tough votes, to take on very, very powerful interests,” he said.

When voters assess whether he or Mrs. Clinton would be tougher on Wall Street financial firms, Mr. Sanders said the choice is clear. …

“I have been walking the walk, not just talking the talk,” he said. He said he took a tough stance against efforts in the 1990s to deregulate the financial sector and suggested that Mrs. Clinton is compromised when it comes to Wall Street regulation, because of donations she has received.

A Wall Street Journal analysis last year showed that financial services were among the largest sources of money Mr. and Mrs. Clinton have taken in since they arrived on the national stage in the 1992 presidential campaign.

“People should be suspect of candidates who receive large sums of money from Wall Street and then go out and say, ‘Trust me, I’m going to really regulate Wall Street,’ ” Mr. Sanders said.

1. a) In an interview with The Wall Street Journal last week, what did Democratic presidential candidate Bernie Sanders say about the federal investigation of Hillary Clinton’s use of a private email account/server for government business when she was Secretary of State?
b) How does this opinion differ from Sen. Sanders’ comments during last month’s Democratic primary debate? How does he explain the difference in his tone?

2. With the Iowa caucuses only three months away, what is Sen. Sanders now questioning about Hillary Clinton’s run for president?

3. a) How did Mrs. Clinton respond to Mr. Sanders’ comments about her in his interview with the WSJ?
b) What reply did Sanders’ campaign have to this accusation?

4. Re-read paragraphs 9-15. What does Sen. Sanders say about Hillary Clinton and the following:

5. Do you think Sen. Sanders’ assertions are fair? Explain your answer.

The most recent Wall Street Journal-NBC News poll showed that only a quarter of registered voters gave Mrs. Clinton high marks when it came to being “honest and straightforward.” By contrast, half of those polled gave her low marks in that regard.

Yet polling also shows that Mr. Sanders is losing ground to Mrs. Clinton and relinquishing the edge he had in Iowa and New Hampshire, the states that hold the first two contests. The same Journal-NBC News poll showed Mrs. Clinton beating Mr. Sanders by a margin of 62%-31% nationally.

In an interview on Capitol Hill, Mr. Sanders said he wasn’t daunted, given his starting point as a little-known independent senator from Vermont. And he took time in the interview to cite polls in which he fares better than Mrs. Clinton in a general election showdown against various Republican candidates.

Since he joined the race, he has attracted the largest crowds, with tens of thousands of people coming out to hear his fiery speeches about income inequality and the untrammeled power of the “billionaire class.”

“We had to fight very hard in the last six months to get my name out there, to get my ideas out there,” Mr. Sanders said. “We still have a long way to go with the African-American community, with the Latino community.…But we’re working hard, and I think at the end of the day we are going to pull off one of the major political upsets in American history.”

Watch Sen. Sanders’ interview with the WSJ below: