(by Peter Foster, Telegraph.co.uk) – The logistical miracle that is Chinese New Year [began] this weekend as 700 million migrant workers return to home to their families to celebrate the start of ‘Year of the Rabbit,’ which begins [on] Thursday. 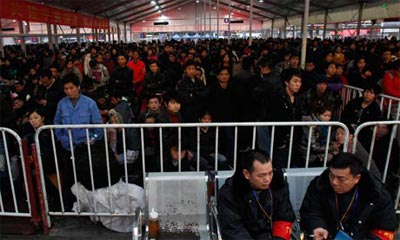 But for many taking part in the largest single movement of humanity anywhere in the world, getting home feels more like a marathon than a miracle, as they queue [stand in line] for hours in the freezing cold to buy tickets for trains that now have standing room only.  [Photo at right: Thousands of passengers wait for trains and tickets at a railway station in Guangzhou.]

Guo Lixing, a 25-year-old logistician who had been working down in the southern city of Suzhou this past year was among the thousands thronging the concourse of Beijing’s main railway station on Friday trying to get a ticket home.

Despite all the billions invested in China’s railway system in recent years seats are still hard to come by, with 35 million more passengers travelling this year than five years ago.

This week one migrant worker who had reached the limits of his frustration stripped naked in protest when he failed to a get ticket after 14 hours [standing on line] at a station in the eastern province of Zhejiang.

Although not yet quite desperate enough to strip, Ms Guo was getting increasingly anxious that she would be unable to complete the final leg of her journey from Beijing to the small city of Handan in Hebei province.

“The train to Beijing took 22 hours and we had standing-tickets only,” she said, keeping a careful eye on the new computer with flatscreen monitor and wireless keyboard that she’d bought as a present for her young nephew. “Now we’re trying to get to Handan, but the office says there are no tickets on the fast train.”

Amid the din of street peddlers selling vacuum-packed roasted Peking ducks, a tasty treat for a New Year’s feast, Ms Guo stood guarding the baggage as she waited for a friend to return with news of their onward journey.

Despite the wait and the biting cold she, like the other 230 million Chinese taking a train home this year, was trying to stay patient, buoyed by the thought of the family reunion that lay in store after a long year away working.

“I just can’t wait to see my parents and my three brothers again,” said Ms Guo, a member of China’s new urban middle class bringing the fruits of her labors back home to her parents who were still farmers in Hebei.

Like countless millions across China next week, Ms Guo will spend her holiday paying her respects to relatives in her village and helping her mother make ‘Jiaozi’ – delicious, savoury pork-filled dumplings which are as traditional to a Chinese new year celebration as turkey is to an English Christmas.

“I just want to eat Jiaozi, steamed breads, noodles and congee [rice-porridge],” added Ms Guo, conjuring up the comforts of home cooking, so dear to all Chinese. “In Suzhou down south, they always just eat rice and more rice. I miss northern food the most.”

After the feasting the family, Ms Guo, along with more than 700 million others (723 million watched last year) will settle down to watch the state broadcaster’s annual Spring Festival Television Gala, a five-hour spectacular of Beijing Opera, dancing, magic, movie stars and comedy skits.

“I’ll definitely be watching,” says Chi Deshuang, a migrant labourer returning home to the port city of Dalian after a year working on Beijing’s construction sites, “we’ll make Jiaozi and I’ve got some Beijing cakes for my mother in my bag, the special ones she really loves. I will give some money too from my earnings.”

Other popular Spring Festival pastimes include exploding vast quantities of fireworks – originally to drive away evil spirits and herald the coming of Spring – and going shopping. Retail sales in the so-called ‘Golden Week’ are expected to exceed [almost $48] billion this year.

However, all such pleasures depend first on reaching home safely, a feat that despite the frustrations and delays everyone appears to achieve in the end, with more than 2.5 billion passenger journeys to be completed by the week’s end.

It’s the slow train (which means another five hours standing) and it departs from a railway station on the other side of the city (which means a tortuous bus journey with all her luggage).

But none of that matters.

“I’m going home,” says Ms Guo with an involuntary, triumphant jump of joy before gathering up her bags and disappearing into the throng in search of that bus, adding over her shoulder, “Chunjie kuai le! Happy New Year!”

NOTE: See “Background” and “Resource Links” below the questions for some of the answers.

2. a) Why are so many people so far from home?
b) How often do these people go home?

3. Why is it increasingly difficult to purchase train tickets over Chinese New Year?

4. What do people do to celebrate Chinese New Year?

ON TRAVEL OVER CHINESE NEW YEAR:

WHAT IS CHINESE NEW YEAR? – THIS YEAR IS THE YEAR OF THE RABBIT (from infoplease.com)

Watch a news clip below: