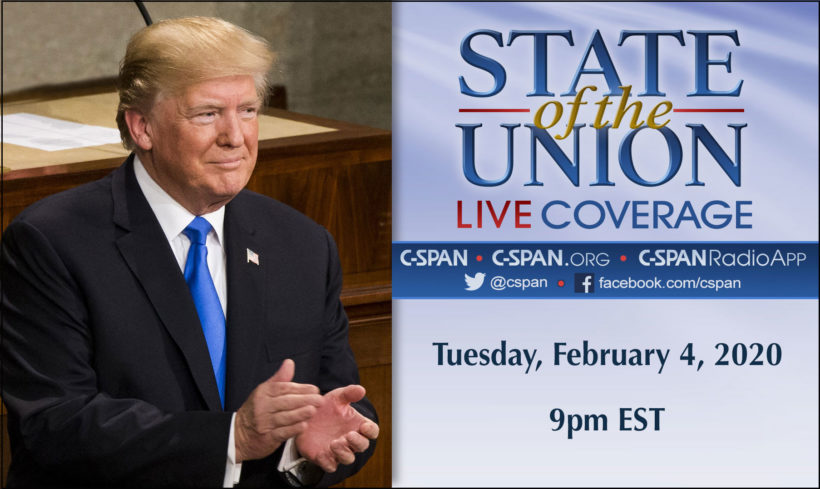 (by Morgan Chalfant, The Hill) – President Trump’s third State of the Union address on Tuesday will put forth a vision of “relentless optimism” that focuses on addressing issues affecting America’s working families, a senior administration official told reporters Friday.

“The theme of the State of the Union is the great American comeback,” the senior administration official said. “In his address, the president will lay out a vision of relentless optimism.”

“He will encourage Congress to work with him to continue building an inclusive economy where the least well-off are making some of the fastest gains and where people of every background are finding new opportunities,” the official said.

Trump’s address to the joint session of Congress on Feb. 4 comes at a time of high tensions between the president and Democratic lawmakers.

When the president heads to Capitol Hill, the Republican-controlled Senate will be on the verge of acquitting the president of the impeachment articles brought against him by the Democratic-controlled House. It’s unclear whether or how the vote will impact what he plans to say.

The official on Friday declined to say whether Trump planned to address impeachment at all, further emphasizing that the speech would strike an “optimistic” tone and urge Congress to take action on legislative actions related to health care and other areas.

The official spoke to reporters before the Senate passed a resolution Friday evening paving the way for a vote on the impeachment verdict next Wednesday. …

The senior administration official said that the central focal points of the speech would be U.S. economic gains as well as the Trump administration’s policies with respect to health care, immigration and national security. …

The president is likely to tout his “phase one” trade agreement with China and the United States-Mexico-Canada Agreement (USMCA) he signed into law this week as well as efforts to secure the U.S. southern border with Mexico and crack down on sanctuary cities. He is also expected to highlight his health care policies while contrasting his plans with proposals put forth by Democrats.

Trump plans to [describe how] his administration’s efforts to cut taxes, roll back regulations and secure new trade agreements [have] boosted the domestic economy.

The president intends to “put forward an agenda focused squarely on the needs of working families, addressing issues that affect Americans’ quality of life and laying out solutions with can-do optimism in the face of unjustified pessimism we are hearing from some in Congress,” the senior administration official said.

Published at thehill .com on January 31, 2020. Reprinted here for educational purposes only. May not be reproduced on other websites without permission from The Hill. Updated: 8:40 p.m.

3. What will the president ask Congress to do?

4. a) What did the senior administration official tell reporters the tone of President Trump’s speech will be?
b) After watching the speech, what do you think? Was that the president’s tone? Explain your answer.

6. As every president’s does, President Trump’s address will focus on multiple issues. Which of the following do you think are most important for the president to include in his State of the Union address tonight? Explain your answer.
a) the economy/the historic job growth & record low unemployment
b) tax reform
c) national security and terrorism
d) illegal immigration crisis/building a wall on our southern border
e) healthcare
f) gun rights / protecting 2nd Amendment / gun policies
g) China tariffs and a fair trade deal; China theft of intellectual property
h) infrastructure
i) education
j) the homeless crisis
k) the federal budget deficit
l) Democrat proposed programs of free college, free healthcare, (and in Andrew Yang’s case free money) for all people living in the U.S., and increasing taxes on “the rich” to 70-90%
m) climate change
n) other (explain)

1.  Tone is the attitude a speaker takes towards a subject. What was the tone of President Trump’s 2020 State of the Union address?

3.  a) What major points did President Trump make about the economy in his address to the nation?
b) What is your reaction to these encouraging statistics?
c) Ask a parent the same question.

4. List some of the things the President promised to do to on trade.

9. The response speech is shorter and often given as a rebuttal to the opposition party’s ideas and plans. This practice began once television became a major part of politics.  Michigan Gov. Gretchen Whitmer and Texas Rep. Veronica Escobar (El Paso) will give the 2020 SOTU response in both English and Spanish. Watch/read the Democratic response to the President’s State of the Union on live TV following the President’s SOTU or at c-span.org.
What do you think of Gov. Whitmer and Rep. Escobar’s response?