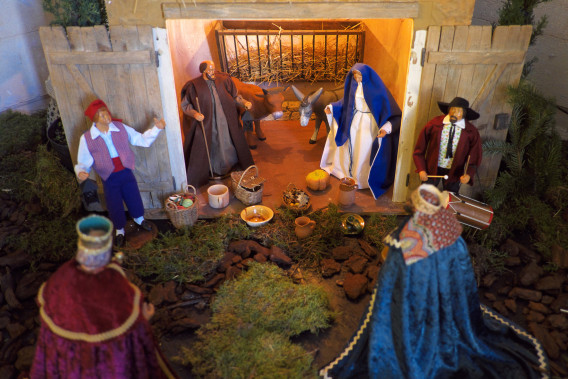 Concord High School in Indiana had to use a mannequin-filled Nativity scene like this one for their annual Christmas performances.

U.S. District Judge Jon DeGuilio had issued a preliminary injunction to stop this year’s live scene, ruling that “the living Nativity scene impermissibly conveys an endorsement of religion and thus runs afoul of the Establishment Clause.”

School officials say the injunction only applied to a live scene and that they complied with the judge’s order.

This year’s show also included performances of songs like “White Christmas,” a Hanukkah song and a traditional African song for Kwanzaa.

An atheist group has forced Nebraska to remove a nativity from its state capitol and replace it with an atheist display.

The Christian legal group, The Thomas More Society, sponsored a nativity last year, which raised questions from some about a possible violation of the Establishment Clause. This year, though, the Lincoln Atheists group preempted the Christians by reserving all the available space in August.

“They have proved our point that all speech is welcome, except Christian,” Martin Cannon, an attorney with the Thomas More Society in Omaha, which sponsors the Nativity scene, told the Journal Star. “We would have shared our space with them, but they are not willing to do the same.”

The Thomas More Society is involved in several nativity disputes around the country.

“The nativity displays represent a constitutionally protected expression by private citizens in traditional or designated public forums, where the sole role of the government is that of a viewpoint-neutral gatekeeper assuring open access for all citizens to have their ‘say,’” Tom Brejcha, Thomas More Society president and chief counsel said in a statement. “If the First Amendment entitles you to get up on your soapbox and plead for a candidate or advocate a political point of view in a public forum, then equally you may get on the soapbox and proclaim the joyous, hopeful message of the Christ Child!”