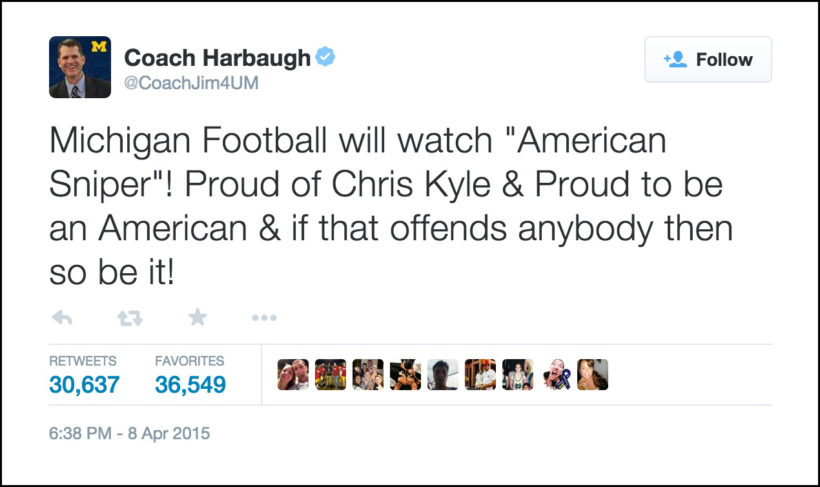 “Michigan Football will watch ‘American Sniper’! Proud of Chris Kyle & Proud to be an American & if that offends anybody then so be it!”

Hours after the University of Michigan reportedly canceled a showing of the movie “American Sniper,” Michigan football coach Jim Harbaugh tweeted support for the film and its main character.

The scheduled movie screening of “American Sniper” at the University of Michigan was abruptly cancelled last Tuesday after nearly 300 students and others complained the film perpetuates “negative and misleading stereotypes” against Muslims.  The movie had been planned to be shown on Friday night at a social event for students.

Lamees Mekkaoui led the drive to get “American Sniper” tossed. She questioned why the school would play a movie that makes her uncomfortable and promotes what she and others have said are anti-Arab and anti-Muslim sentiments.  The drive, which included a letter signed by a couple of hundred fellow students, led the university’s Center for Campus Involvement to pull the film from its lineup of UMix events.

“The movie American Sniper not only tolerates but promotes anti-Muslim…rhetoric and sympathizes with a mass killer,” according to an online letter circulated among the campus community via Google Docs that garnered the signatures. The signers were mostly students, but also some staff, as well as the Muslim Students’ Association and the president of Students Allied for Freedom and Equality, a Palestinian solidarity group at UMich. …

The Center for Campus Involvement did not return multiple phone calls seeking comment, but its official Twitter account noted “Paddington Bear,” a PG-rated movie about a stuffed animal’s misadventures, will be shown instead of “American Sniper.”

But when word of the movie showing being canceled became known, a backlash quickly developed, with a second petition making its rounds through U-M’s campus on Wednesday, accusing the university of censorship.

“The movie American Sniper is not about a racist mass murderer or a criminal,” that petition said. “If the University prevents a movie like this from being shown, it promotes intolerance and stifles dialogue and debate on the subject and goes directly against the atmosphere UMix purports to provide. As adults at a public university, we should have the option to view this movie if we so choose and have the opportunity to engage on the topics it presents to come to our own conclusions on the subjects. Students should be trusted to interact responsibly on a movie no different than any other film depicting the lives of the troops at war, such as Saving Private Ryan.”

Midafternoon Wednesday, the university said it would show “American Sniper” at a different time and different place with an discussion to follow. It said it would replace it with the “Paddington” kids movie.

“American Sniper,” directed by Clint Eastwood and starring Bradley Cooper, is based on a true story. It is the autobiography of U.S. Navy Seal Chris Kyle, who served in Iraq and has the most confirmed kills as a sniper in U.S. military history.