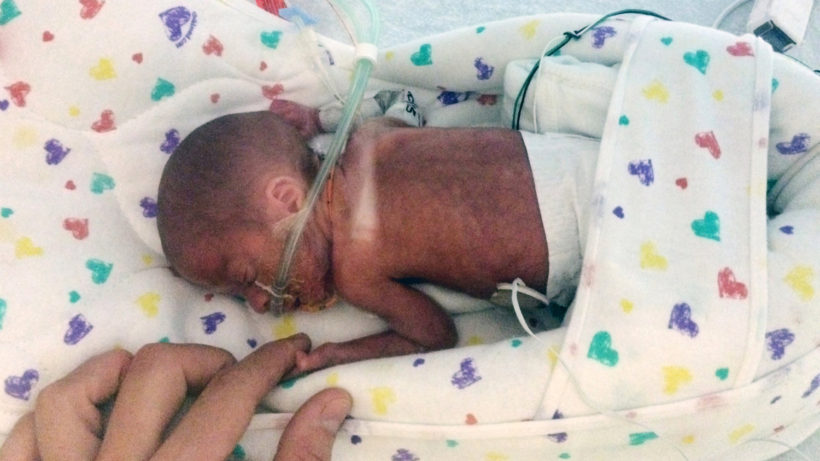 In this Sept. 11 photo provided by Emily Morgan, Chase Morgan holds his son Haiden's hand at the Miami Children's Hospital. Emily Morgan, who unexpectedly gave birth on a cruise ship months before her due date, says she wrapped towels around her boy and, with the help of medical staff, managed to keep him alive until the ship reached port.

“About 45 minutes after I had delivered, the two doctors came back in and said the baby was still alive, however, they didn’t expect him to live very long.” Utah couple Chase and Emily Morgan were on a seven-day Royal Caribbean cruise with their 3-year-old daughter In August. What was supposed to be a relaxing vacation to celebrate their daughter’s birthday quickly turned into a nightmare when Morgan went into early labor on the family’s second night aboard.

Between Florida and Puerto Rico, Morgan’s labor pains began. The baby was born 30 minutes later. The doctors on board told Morgan that she had miscarried and her child had died. When she asked to see the baby, they refused.

Then, she says, came another shock.

“About 45 minutes after I had delivered, the two doctors came back in and said the baby was still alive, however, they didn’t expect him to live very long.”

The Morgans wrapped the baby in towels and nestled him between heated saline packets to keep him warm, the Associated Press reports. When the ship’s captain learned that the baby was alive, he sped towards San Juan, Puerto Rico, arriving as black spots were starting to appear on Haiden’s extremities, indicating a loss of circulation.

After a few days in Puerto Rico, a jet flew the family to a hospital in Miami where they will stay for at least another month until Haiden is strong enough to be moved.

Haiden is making good progress, Morgan said. He’s being fed breast milk through a syringe into a tube in his stomach — 2 tablespoons at a time over the course of 90 minutes.

He’s expected to be hospitalized until his Dec. 19 due date, though they’re hoping he’ll be strong enough to return to Utah at the end of October.