As this first week back is a short, we offer a special quiz of news from the summer.

1. The picture below is from the growing problem of thousands of homeless camps in:
a) Downtown Los Angeles
b) Dallas
c) Beverly Hills
d) Cape Cod 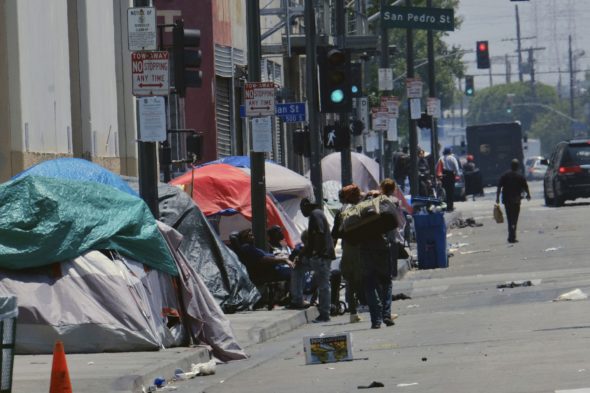 2. In June, the left-leaning president of __________ agreed to take steps to curb the number of migrants and human trafficking after President Trump threatened to impose tariffs on the country’s goods coming into the U.S.
a) China
b) Canada
c) Mexico
d) Honduras

3. In July, it was announced that 3,100 inmates in federal prison will be released early on good behavior as a result of The First Step Act, the most significant criminal justice reform legislation in years, which had been promoted and signed into law by:
a) President George W. Bush
b) President Barack Obama
c) President Donald Trump
d) President Bill Clinton

4. In July, hundreds of thousands of protesters marched through the streets for days calling on the governor to resign. Anger rose after a scandal involving the governor’s private messages to his inner circle, though many people were protesting government corruption as well. The governor of __________ finally resigned.
a) California
b) New York
c) Texas
d) Puerto Rico

5. On July 26, the Supreme Court _________ a lower court’s ruling to block President Trump’s plan to use approximately $2.5 billion in unspent military funds for wall projects in California, Arizona and New Mexico.
a) overturned
b) agreed with

6. In July, a conservative journalist who was reporting on a protest was attacked and injured by Antifa thugs in:
a) Portland, Maine
b) Chicago
c) Orlando
d) Portland, Oregon

7. Also in July, a US Navy ship downed a(n) __________ drone in the Strait of Hormuz after its operators ignored warnings to change course. The ship, the USS Boxer, was on a routine patrol when the drone approached within 1,000 yards.
a) Saudi
b) Iranian
c) Egyptian
d) French

8. In a surprise announcement at the end of August, the U.S. Supreme Court reported that Justice __________ had completed a three-week course of radiation therapy for cancer, for a tumor on the pancreas, which had begun August 5.
a) Brett Kavanaugh
b) Elena Kagan
c) Ruth Bader Ginsburg
d) Sonia Sotomayor

9. During the summer, the Board of Supervisors for the city of __________, which has one of the highest crime rates in the country, ruled that from now on a convicted felon or an offender released from custody will be known as a “formerly incarcerated person,” or a “justice-involved” person or just a “returning resident.” And the term juvenile “delinquent” will now be changed to a “young person with justice system involvement,” or a “young person impacted by the juvenile justice system.” The local officials say the new language will help change people’s views about those who commit crimes.
a) Chicago
b) Baltimore
c) Detroit
d) San Francisco

10. It was reported this summer that President Trump had discussed the idea of the U.S. purchasing Greenland. Which one of the following is not true?
a) President Obama discussed the same idea, saying Greenland would give the U.S. a strategic position against Russia
b) President Harry Truman offered to buy Greenland after WWII for $100 million
c) the President believes the U.S. should prevent China or Russia from getting control of Greenland