Posted on November 7, 2019 in Thursday's Editorial 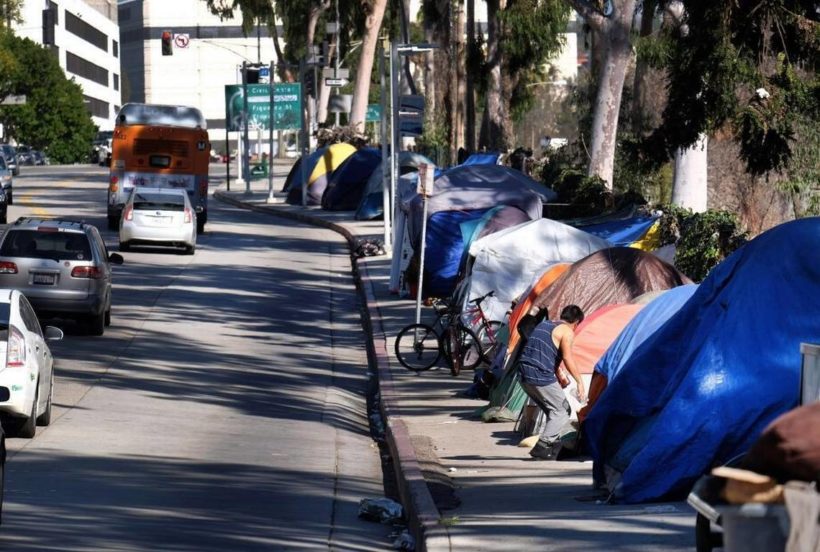 (by Michael Shellenberger, Forbes) – [In September], fifteen officials from the White House toured Skid Row in Los Angeles with the head of a local homeless shelter. “Four or five of them were from the Environmental Protection Agency,” Rev. Andy Bales of Union Mission church told me. “That’s because human waste flows into storm sewers.”

California is home to some of the world’s toughest environmental and public health laws, but skyrocketing homelessness has created an environmental and public health disaster. The 44,000 people living, eating, and defecating on the streets of L.A. have brought rats and medieval diseases including typhus. Garbage is everywhere. Experts fear the return of cholera and leprosy.

And homelessness is making people violent. “We are seeing behaviors from our guests that I’ve never seen in 33 years,” said Bales. “They are so bizarre and different that I don’t even feel right describing the behaviors. It’s extreme violence of an extreme sexual nature. I have been doing this for 33 years and never seen anything like it.”

Bales says he was one of the people who urged the US government’s Federal Emergency Management Administration (FEMA) to intervene. “We’ve been crying out for a National Guard-like response,” said Bales, whose church provides food, showers, and shelter to 1,350 people camped nearby. In 2016 Bales lost the lower half of his leg to a flesh-eating bacteria from contamination on Skid Row [where he works helping the homeless].

How did things get so bad in California? The state has long prided itself on being humanistic and innovative. It is home to some of the world’s largest public health philanthropies, best hospitals, and most progressive policies on mental health and drug addiction. The Democrats have a supermajority. What went wrong?

According to Bales and other experts, California made homelessness worse by:

Other states have done a better job despite spending less money. “This isn’t rocket science,” said John Snook, who runs the Treatment Advocacy Center, which advises states on mental health and homelessness policy around the country. “Arizona is a red state that doesn’t spend a ton on its services but is the best scenario in every aspect. World-class coordination with law enforcement. Strong oversight. They don’t let people fall apart and then return to jail in 30 days like California does.”

For decades, many progressives have claimed that homelessness is really just a kind of poverty, a manifestation of social inequality. In 1986, celebrity comedians Whoppi Goldberg, Robin Williams, and Billy Crystal held “Comic Relief,” a telethon for homelessness. Throughout it, they emphasized that the homeless were just like you and me, just poorer. Today, many of California’s leading homelessness advocates insist that the current crisis is due mostly to the housing shortage.  Homelessness experts and advocates disagree.

“I’ve rarely seen a normal able-bodied able-minded non-drug-using homeless person who’s just down on their luck,” L.A. street doctor Susan Partovi told me. “Of the thousands of people I’ve worked with over 16 years, it’s like one or two people a year.  And they’re the easiest to deal with.”

Rev. Bales agrees. “One hundred percent of the people on the streets are mentally impacted, on drugs, or both,” he said.

Most of the time what people mean by the homelessness problem is really a drug problem and a mental illness problem.

“The problem is we don’t know if you’re psychotic or just on meth,” said Dr. Partovi. “And giving it up is very difficult. I worked in the local jail, and half of the inmates in the women’s jail were Latinas in their 20s, and all were in there for something related to meth.”

The people who work directly with the homeless say things worsened after California abandoned the “carrot and stick” approach toward treating the severely mentally ill and drug addicts who are repeat offenders. “The ACLU will come after me if I say the mentally ill need to be taken off the street,” said Dr. Partovi, “so let me be clear that they need to be taken care of, too.”

Bales says things worsened ten years ago when L.A. and other California cities rejected drug recovery (treatment) as a condition of housing. “When the ‘Housing First’ with a harm reduction model people came in they said ‘Recovery doesn’t work,’” said Bales. “But it was after that when homelessness exploded exponentially.”

Bales says people have little incentive to do treatment when there is no threat of jail time. “[The Housing First harm reduction advocates] talked about new services, but they were all voluntary.” Things went further in this direction with the passage of Proposition 47 in 2016, which decriminalized hard drugs and released nonviolent offenders from prison without providing after-care support.

Snook (who runs the Treatment Advocacy Center mentioned above) says that California is so unwilling to require non-voluntary mental health care that it is only now considering more extensive “conservatorship” — where a health official is given the authority to make decisions for a mentally incapacitated individual —  and only after nine acts of violence against themselves or others.

“Imagine having a sick child and hoping he attacks someone once a month so somebody can do something!” said Snook. “That is so out of sync with the rest of the country, and with what mental health care looks like, that it is laughable.”

Lack of shelter and leadership are factors alongside extreme progressive idealism. “It’s the impact of not having a stick and not having shelter,” says Bales. Snook agrees. “There’s a provision that says Medicaid will now pay for beds in psychiatric hospitals,” said Snook. “It’s a no-brainer, but California is hemming and hawing. They don’t want to involuntarily incarcerate, but it’s self-defeating because you end up with mentally ill in jail because a bed isn’t available.”

Is the problem a lack of money? “California spends more than most places,” said Snook, whose organization researches and advocates solutions for mentally ill homeless people nationally. What happened to the money from Proposition 63, the successful 2016 ballot initiative that taxed millionaires for mental health? “A Hoover Foundation audit found funds that were supposed to go to seriously mentally ill were used for yoga and trauma and other laudable things, but none for the seriously mentally ill,” said Snook.

“When you look at the amount of money being spent, and then you hear the argument that we need more money? You have to ask, ‘How much more?’” said Snook. “Right now it’s just good money after bad. There’s no oversight and no accountability.”

Liberal idealism also wasted much of the $1.2 billion that L.A. voters raised in 2016 when they voted to tax themselves to build housing for the homeless. “It was supposed to build 10,000 units but in truth will create half that because each one costs $527,000 to $700,000,” said Bales. “They will take ten years to build, at which point 44,000 lives will have been destroyed by living on the street.”

Why did progressive housing activists in L.A. insist on building such expensive apartments for so few people, so slowly, rather than quickly building cheaper units faster for 44,000 people?

“[Housing First] is a dogmatic philosophy,” said Bales. “I’ve lost friends. One of my closest friends is attacking me for pushing for housing that costs $11,000 instead of $527,000 per person. He can’t get that we can’t provide a $527,000 to $700,000 apartment for each person on the street. I’ve been in planning meetings where people said, ‘Everybody deserves a granite countertop,’ but that isn’t going to work for 44,000 people.”

L.A.’s woke housing advocates have intimidated the city’s mayor. “I think the mayor’s unwilling to put out bridge shelters because of backlash from some homeless advocates,” said Bales, “and is concerned about NIMBYs, and may be concerned about union workers because the shelters may not be built by the unions.”

Despite the emergency, and in some ways because of it, homeless reformers are hopeful today that California will seek a more moderate path toward treating mental illness and drug addiction and providing shelter. “The problem is so bad and so significant that there’s an opportunity now,” said Snook.

Bales agrees. “In New York where they put a roof over the heads of 95% of the homeless, it took a law to change things,” he said. “I thought it would take a law here, too, but maybe we can get there without a law if people continue to show political courage.”

California recently awarded L.A. $124 million for the homelessness emergency, of which L.A.’s mayor has spent $66 million on 27 cheap, quick-to-assemble temporary shelters that can quickly get 13,000 people off the street. “I think the mayor has been fighting an uphill battle against the powers that be, and his political courage is growing,” said Bales.

Sacramento Mayor Darrell Steinberg, for his part, would like to see legislation codifying his “right/obligation to shelter” framework, which blends the traditional liberal emphasis on rights and care with the traditional conservative emphasis on order. “I’m open to more carrots and sticks and would be for an obligation to seek shelter. I don’t think living outside is a civil right,” he told me. “We back, philosophically, ‘Housing First’… but if all we did was permanent housing, it would be until 2037 before we housed every person on the streets in the Bay Area.”

It’s hard to see any of what needs to happen as particularly partisan. “The key is focusing services on the seriously ill,” argues Snook. “You provide extended care. You open up beds for when they are stable. You provide care to people to stay out of the system.” What about the homeless who are not mentally ill? Focus on the hardest population first, he urged. “Once you get that population addressed, you can move on to the others. This is what New York City did. Once you get that population serviced, you’re not in crisis mode anymore, and you free up money for everyone else.”

I left the reporting for this column surprised by how stuck California’s leaders remain in 1960s ideology and how slow they’ve been to react to the crisis.

“It’s better late than never, but still we are not treating it in the urgent manner we should,” said Bales. “We’re not there yet where people are really taking it seriously as an emergency.”

For psychiatrist E. Fuller Torrey, MD [who wrote the] devastating and critically-acclaimed 2014 history, American Psychosis: How the Federal Government Destroyed the Mental Illness System, it all comes down to leadership. “It is not clear where the leadership for change will come from,” he wrote seven years ago, “but until it emerges, change is unlikely.”

Published September 12, 2019 at Forbes .com. Reprinted here Nov. 7, 2019 for educational purposes only. May not be reproduced on other websites without permission from Forbes.

1. Mr. Shellenberger writes in paragraph 8: “Today, many of California’s leading homelessness advocates insist that the current crisis is due mostly to the housing shortage.  Homelessness experts and advocates disagree.” What do these experts blame for the homeless crisis? (see paragraphs 9-12)

2. Are you surprised by the assertions made by Rev. Bales and Dr. Partovi? Explain your answer.

3. What is the problem with California’s Proposition 47, which was passed in 2016, according to Rev. Bales?

4. Democrats have a supermajority in California’s state government. Why do you think these leaders appear unwilling to acknowledge the real cause of homelessness in their cities?

Read Part I of this series: “Why California Must Declare A State Of Emergency On Homelessness — Or Get A Governor Who Will”

Read Part III of this series: “Unwilling to Address Homelessness Crisis, California Governor Instead Seeks to Blame Others”

Watch a September 18 interview with Michael Shellenberger, author of this Forbes article: