Who Stole the American Spirit? 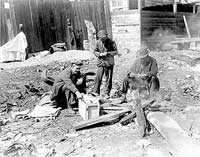 (by Zachary Karabell, OpinionJournal.com) – According to the most recent polls, more than 75% of the American public believes the economy is in bad shape. All three remaining candidates for president are treating the economy as the biggest electoral issue, and all agree the situation is dire.

The normally sanguine Alan Greenspan recently observed that the current economic mess is “the most wrenching” since World War II; Fortune magazine’s Allan Sloan, who’s been covering the business of business for decades says, “I’m more nervous about the world financial system than I’ve ever been in 40 years.”

There is no denying that the current financial morass is deep and painful. But taking the long view, there is something both startling and disturbing about the gloom that has settled over Wall Street and the country in general. In fact, looking back over the past century, it would be a stretch to rank the current problems as especially notable or dramatic. Something else is going on – namely a cultural rut of pessimism that is draining our collective energy, blinding us to possibilities, and eroding our position in the world.

Right now we have an unemployment rate of 5% and headline inflation topping 4%. We have economic growth of 0.6%, extremely low consumer confidence and weakening consumer spending, small business optimism at a 28-year low, and of course a housing market that is showing declines in excess of 20% in some parts of the country.

These are hardly statistics to celebrate, but they are a far cry from the crises of the 20th century. Next time someone compares the present to the Great Depression, stop them. Between 1929 and 1932, the Dow Jones index went to 41.22 from 380.33, a decline of 89%. Today’s hang-wringing about a 20% decline in the major indices (much of it since recouped) doesn’t come close.

The unemployment rate in 1933 was 24.9%; seven years later, after the intensive efforts of the New Deal, it stood at 14.6%. Even adjusting for changed methodology since then, today’s jobless situation hardly compares. While the recent collapse of Bear Stearns shocked Wall Street, in 1933 alone 4,000 banks failed, and millions not only lost their homes but were rendered homeless.

It is also common today to hear comparisons to the stagflation and grim economy of the 1970s. Here too perspective is in order.

The rhetoric and the polls paint a bleak picture of America today. Yet it bears remembering that barely 10 years ago the mood was almost diametrically opposite. In the heyday of the Internet boom and the utopian spirit of the New Economy, the prevailing attitude was that anything is possible. Even with several crises – such as the collapse of Long Term Capital Management and the Asian currency crisis – the mood remained bright.

Take this from 1997: “This is the golden age of capitalism,” said Leonard Riggio, the son of a Brooklyn cabdriver and head of Barnes & Noble. “The wealth is more expansive and deeper than in the past – not four hundred or a thousand rich, but tens of thousands.” Others forecast the beginning of a “long boom” leading to widespread prosperity and the end of poverty. The gospel of the New Economy promised a magical fusion of the Internet and Wall Street that would finally solve the age-old riddle of how to make a society both happy and wealthy.

That all came to an end in 2001; and yet the technological advances of the 1990s led to incredible innovations and wealth creation, especially around the world. More importantly, the economic evolution of places such as China and the Gulf states of the Middle East is intimately tied to something so simple and so essential that it is easily overlooked: the belief that they can achieve anything.

That used to be the defining feature of this country, one that peoples throughout the world marveled at and envied. Lord Bryce, England’s turn-of-the-20th-century ambassador to the U.S. and an astute observer of our culture, summed it up neatly in his “The American Commonwealth”:

“America excites an admiration which must be felt upon the spot to be understood. The hopefulness of her people communicates itself to one who moves among them, and makes him perceive that the graver faults of politics may be far less dangerous there than they would be in Europe. A hundred times in writing this book have I been disheartened by the facts I was stating; a hundred times has the recollection of the abounding strength and vitality of the nation chased away these tremors.”

Today, the economy and the American political system are seen in almost entirely negative terms, and in need of drastic reform. Perhaps it is a strength to be able to be so self-critical. But there is a fine line between self-criticism and self-excoriation.

This isn’t a Democrat-Republican divide. Ignoring problems is just as much of a liability as overstating them. But our deep pessimism and fear places us at serious disadvantage globally.

Today, in China or in Dubai, you can feel the electric hum of activity, ambition and sheer optimism about the future. Certainly, some of that is naïve, but it is also a strength and a source of energy. China’s stock market was down almost 50% in the past months, yet that has hardly dented the optimism. There have been severe real estate crashes in Shanghai and the Gulf, yet that hasn’t derailed the sense of forward progress.

The path to a more balanced view of ourselves is impossible to chart, but the first step is surely to have better perspective on where we are and where we have been. The alternative to grime-encrusted lenses isn’t rose-tinted glasses, but more equanimity about our weaknesses and our strengths would surely help us navigate.

Unfortunately, the problem with downward spirals is, well, that they spiral downward. There is little evidence just now that we are about to break this cycle, and until we do, we will watch in awe, envy and fear as peoples throughout the world do what we used to do so well.

2.  How does the decline in today’s stock market compare with the numbers during the Great Depression and also during the 1970’s?

3.  Why should Americans be optimistic about the economy today, according to Mr. Karabell?

4.  Ask a grandparent if he/she thinks that the economy is worse today than it was in the 1970’s.