UK blocks citizen from leaving the country for medical treatment 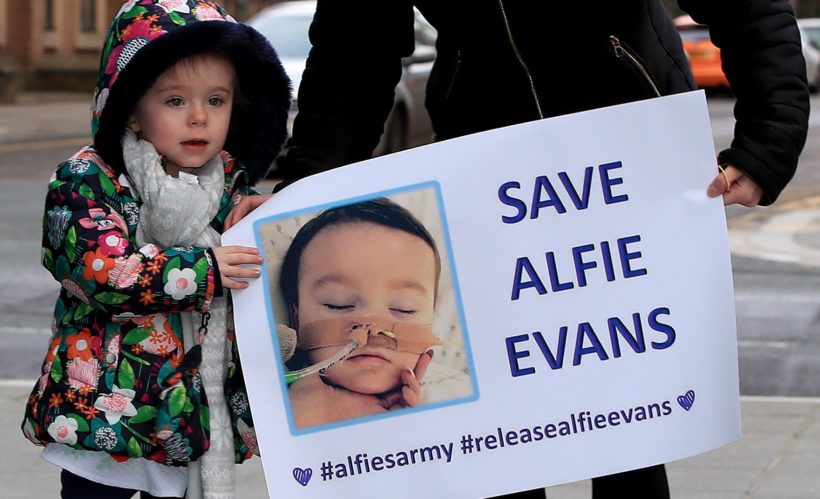 (by Kira Davis) – In recent weeks many people across the globe have been moved and outraged by the story of little Alfie Evans, whose life hung in the balance in a British hospital and whose fate was taken from the hands of his parents by the National Health Service (NHS) and the courts.

As of the time of this publication, Alfie was forcibly removed from his breathing devices but continues to breathe on his own. The NHS and the courts would not even allow Alfie to go home with his parents, and when the nation of Italy offered to fly him to a Rome hospital for experimental treatment (at their own expense) the courts told Alfie’s parents they would not be allowed to leave the country.

Even after Alfie surprised doctors with his will to live he was denied water for nearly six hours. He continued to be denied nourishment. With the denial of his exit from England altogether it was clear that the British courts and the NHS had no intention of letting Alfie live. Alfie Evans more than 48 hours after he was removed from his ventilator on April 23, 2018.

Though still morally squishy there’s a valid argument to be made that when a nation votes for socialist healthcare they are agreeing to let the government treat their lives as algorithms. When the bottom line is measured in dollars rather than lives, the risk a society takes is illustrated in cases like Alfie’s. The NHS simply cannot afford the extremely expensive prospect of keeping alive a little boy who most likely will not live much longer due to an incurable condition. Alfie’s chances of any meaningful recovery were slim to none. It isn’t outside the boundaries of reason that the government tasked with his treatment would deem it simply not worth the effort expended.

It’s cruel, but logical…the inevitable result of a single-payer system.

I may not agree with such reasoning, but I can at least derive the path that such woeful decisions must take in a place like the UK.

What is not logical and nearly incomprehensible is the decision of the court not simply to deny Alfie further treatment, but then deny his right and the right of his parents to leave the country to seek treatment elsewhere. Even that decision might make a tiny bit of sense if it were to add to the NHS’ costs. That would be a problem for that pesky algorithm. However, Italy had already sent an airlift equipped to take the young child. His transportation and hospital provisions were covered by donations and the state of Italy. In fact, to move Alfie out of the care of the NHS would only save them money and labor. Alfie’s parents would have one more shot at rescuing his life. It seems like a win-win for everyone.

And still, the courts have barred the family from leaving the country.

Let’s ponder that for just one moment. Great Britain is a nation with a proud history of freedom and democracy. Most other nations around the world and Britons themselves would describe it as a “free country”, and yet here is a case where its free citizens are not allowed to leave its borders.

Is this something that should happen in a “free country”? Would Alfie’s parents be barred from taking a vacation? Would anyone in their right mind in that country find it acceptable or consistent with British values to deny any family the right to leave for a vacation or to visit a relative abroad? Why then is it allowable for this family to be virtual hostages in their land simply because their reason for travel is medical care rather than pleasure?

Some years ago I watched a documentary on the design and building of the Berlin Wall between East Germany and West Germany. It included extremely rare clips of interviews with the architects.

I searched high and low for the film, but was unable to locate it. If any reader has any clue where to find it please do let me know…I’ve been desperate to watch it again.

In one clip, an aging (former) East German Wall architect spoke briskly about the strategy of his designs. Although the interview was conducted during what must have been the last years of his life, he still seemed deeply resentful that he was being asked to defend the wall’s erection even after the fall of the Eastern Bloc. I’ll never forget what he said in that interview – it made the hair stand up on my arms.

As I can’t find the clip, you’ll just have to take my word for it (or not). The point is – this man and his comrades felt that the only way to sell people on their socialist vision was to force them to live in it. Those leaving were just too stupid to understand that it was the best thing for them.

This is exactly the point in the ruling by the NHS and the courts to forbid their free citizens from leaving the country. If they are allowed to flee the heart-wrenching consequences of socialism, then others will want to do the same. How can a socialist system work without the cooperation of everyone? And how can you force people to participate in that socialist system when they discover that system may kill them or their loved ones?

You build a wall.

Great Britain doesn’t yet have a wall to keep its citizens in, but the courts have built one with the law. Just as East Germany could not tolerate the massive loss of defectors who were leaving with their training, intellect and tax dollars, Great Britain’s healthcare system cannot tolerate the defection of those who might find better healthcare somewhere else.

After all, how would it look if Alfie were allowed to leave England (allowed to leave a free country! Even to write the words feels absurd!) and then found a successful treatment in another country?

It would be an abject embarrassment to a government that holds up their socialist healthcare as one of the wonders of the Western world. Not only would they be forced to admit that their own doctors and bureaucrats were wrong for denying this baby life-saving measures, but they would then have to deal with hundreds, maybe thousands of other citizens fleeing the bondage of NHS algorithms for a chance at swifter, more modern healthcare.

For some bizarre reason, a nation that boasts figures like Winston Churchill and Margaret Thatcher, a tiny island nation that was once so powerful and broad it was said that the sun never set on the British empire…for some inexplicable reason that nation has chosen to hang its pride and joy on socialized medicine.

If you think I exaggerate just look up the opening ceremonies of the London Olympics.

To release this child to the care of any other nation would be to admit failure, and heartless bureaucrats who will never have to watch young Alfie struggle for air or dehydrate to death have decided that their misplaced pride is more valuable than the lives of their citizens.

As a born Canadian I’ve often heard friends and family condescendingly mock the United States for our dogged refusal to bow to socialized medicine. They have the woefully ill-informed idea that people without health insurance here don’t receive care or expensive treatment at all.

To anyone who echoes such sentiments, let me point to poor, sweet Alfie Evans and his helpless parents as to why most Americans still abhor the idea of the government having the last say in whether or not you get the treatment you need to live.

Ask anyone here and 9 times out of 10 they’ll tell you they’d give their last dollar, sell their last possession, go into debt for the rest of their lives to save the life of someone they loved rather than sit helpless as their government sentences that person to death because it just isn’t “worth it”.

It’s never “worth it”…until it’s your child. When government controls your healthcare, they ultimately control what your life is worth to the people who love you. I’ll take the system we have here in America over what Canada or the UK shoves down the throats of its citizens every day…  Given how many Canadians seek surgeries and treatments south of their border every year, I reckon they would too.

Alfie Evans may indeed have never really had a chance to survive his illness, but if there were a chance – one that would not cost the taxpayers of Great Britain – shouldn’t his parents be allowed to seek it out? Shouldn’t they, as citizens of a “free country” be allowed to leave its borders whenever they please and for whatever reason they please?

Sadly, Alfie – and little Charlie Gard before him – is doomed to be the sacrificial lamb at the altars of pride and socialism.

You will never convince me that this is right in any way. Never.

Because what this is… this is nothing short of real, actual, genuine evil.

1.  Tone is the attitude a writer takes towards his subject: the tone can be serious, humorous, sarcastic, ironic, inspiring, solemn, objective, cynical, optimistic, encouraging, critical, enthusiastic…  Which word do you think best describes the tone of Kira Davis’ commentary?  Explain your answer.

2.  The purpose of an editorial/commentary is to explain, persuade, warn, criticize, answer, entertain, praise or inspire . What do you think is the purpose of Ms. Davis’ editorial? Explain your answer.

3. What is your reaction to this story?

For the most recent updates on Alfie Evans’ case, go to lifesitenews.com.

Watch Alfie open his eyes for his father: