Trump, Refugees, and the Truth

Posted on February 2, 2017 in Thursday's Editorial 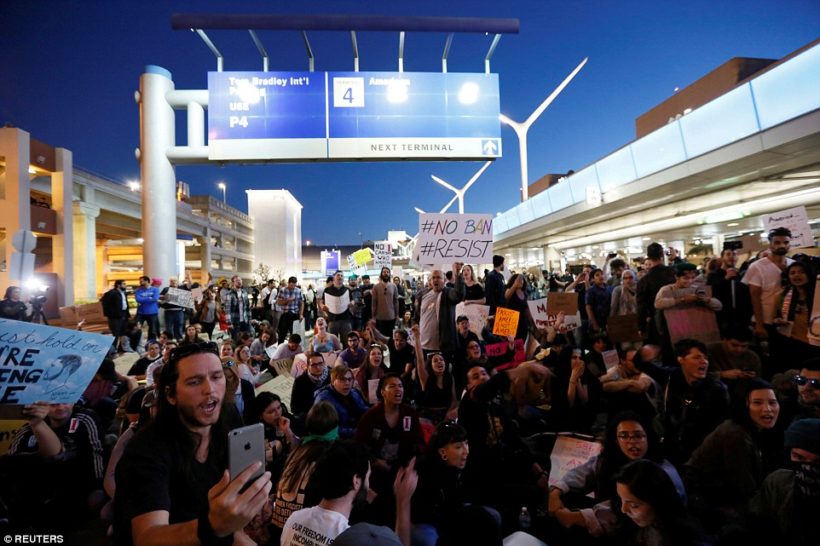 (by James Jay Carafano, RealClearWorld) – It is President Donald Trump’s most controversial executive order to date. The document, signed last weekend, temporarily halts the admission of refugees from several terrorist hotspots in the Middle East and North Africa. It also caps the total number of refugee admissions at 50,000 per year.

These limitations are in keeping with presidential precedent set by Bush and Obama. So, why the maelstrom of outrage? It’s been so over the top, you’d think the United States had permanently barred its gates to immigrants and twisted the Statue of Liberty’s torch-bearing grip into a Heisman stiff-arm.

Not only is that simply not the case, but there is an iron-clad national security rationale backing the president’s policy.

Having led the Department of Homeland Security transition team and briefed Trump when he was president-elect, I know firsthand that this policy is driven by a heartfelt desire to keep Americans safe while making America a safe haven for those affected by the horrors of ISIS and brutal dictators.

But before getting into motivation, let’s look at what the policy actually does. It temporarily halts all refugee admissions from all countries for 120 days. While 120 days may seem like a long time, current refugee admissions take, on average, more than two years to process. The temporary suspension may add inconvenience, but it by no means represents the ending of America’s refugee program.

Perhaps more controversially, the policy imposes a 90-day ban on entry by individuals coming from Iraq, Syria, Iran, Libya, Somalia, Sudan, and Yemen, and it halts the admission of Syrian refugees until the administration has determined “sufficient changes have been made to the USRAP [the United States Refugee Admissions Program] to ensure that admission of Syrian refugees is consistent with the national interest.”

In other words, the United States wants to take the time needed to review and improve its process for admitting refugees — especially refugees from terrorist-ridden Syria — so it does not suffer the same problems experienced by our European partners, problems which have led to deadly attacks on innocents.

Some have denounced this action as a radical, “un-American” break from past practice. Yet, for years, the Obama administration essentially shut Syrian refugees out of the admissions process. From 2011 to 2014, the Obama administration allowed a mere 201 Syrian refugees into the country. Last year, that number spiked to more than 13,000, with no change in the vetting process.

Some have asked why the seven countries on the list were chosen, and why others which have been home to terrorists, such as Afghanistan or Saudi Arabia, were left off. It’s a reasonable question, for which there is a reasonable answer.

What is clear from the administration’s actions to combat terrorism so far is that they intend to fight current and future wars, not those of the past. Most intelligence and defense experts agree that, as ISIS is beaten down in Iraq and Syria, its fighters who survive will flee, seeking refuge in other nations where they are less likely to be recognized — and where they may resume their unholy war. The seven nations on the list are the seven nations identified by the Obama administration as the most likely places from which fleeing terrorists will seek entry into the United States, either directly or indirectly, after first emigrating to Europe.

To ignore terrorists’ intentions to strike the United States is to ignore reality. While ISIS fighters posing as refugees have not yet attacked the United States, that does not mean they will not. In fact, you can count on them trying. Our enemies are forward-thinking and opportunistic. To be successful, counterterrorism policy must be forward-thinking as well, anticipating 10 steps ahead rather than merely responding to the threats (think shoe-bombers) of the past.

But, what about that cap on refugee admissions? The 50,000 per year limit is very much in line with past practice. For example, in 2004, the Bush administration limited refugee admissions to 70,000, and wound up admitting fewer than 60,000.

Well, what about the way this policy was implemented? Here, we can agree, there was much to criticize. The lack of consultation between executive agencies and the confusion on whether green-card holders would be affected, for example, were unforced errors — altogether avoidable and unnecessary.

Thankfully, implementation problems can be and are being overcome. Constructive criticism helps improve the process. But ignoring the rationale behind the policy and demonizing well-meaning Americans who believe it is a measured attempt to balance the responsibility to protect American citizens while helping those in need is despicable.

Our world continues to grow more and more dangerous. Islamist terrorists have discovered that they can wreak havoc by taking advantage of the plight of the very people they have displaced. We must be smarter; we must be more prepared, and we must defeat them.

Published January 31, 2017 at RealClearWorld.com. Reprinted here February 2, 2017 for educational purposes only. May not be reproduced on other websites without permission from RealClearWorld.

1. Tone is the attitude a writer takes towards his subject: the tone can be serious, humorous, sarcastic, ironic, inspiring, solemn, objective, cynical, optimistic, encouraging, critical, enthusiastic… Which word do you think best describes the tone of James Carafano’s commentary? Explain your answer.

2. What is the main idea of Mr. Carafano’s commentary?

3. How does this commentary differ from the majority of news reports on President Trump’s policy on immigration/travel from the 7 countries?