Trump Has China Quaking In Its Boots

Posted on October 11, 2018 in Thursday's Editorial 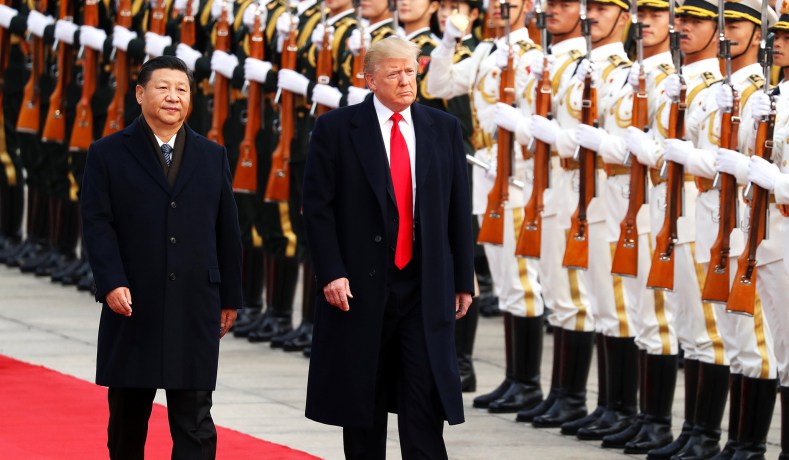 NOTE: A trade surplus (a surplus in the balance of trade) occurs when the value of a country’s exports exceeds that of its imports. A trade deficit (also called a trade gap) occurs when imports exceed exports. (from ft.com)

(by Steven W. Mosher, RealClearPolitics) – With China still running a record trade surplus with the US, it seems premature — to say the least — to say that Trump has won his long-overdue trade war with China.

But it is not too early to conclude that, despite their threat of retaliatory tariffs, China’s Communist authorities know that they have lost.

The increased tariffs to date, combined with the threat of more, have already clipped the wings of China’s economic rise. Its stock market is down 21 percent year over year, industrial output is slowing and its currency is weakening.

Looking beyond the bluff and bluster emanating from Beijing, there is evidence that Party leader Xi Jinping is looking for a way to stand down. …

In early July Xi ordered state-media outlets to tone down their rhetoric. “Self-deception and boasting will not bring about true self-confidence and pride,” the official Communist Party newspaper dutifully editorialized.

This sudden modesty was a striking turnabout from five years of constant bragging — by none other than “Core Leader” Xi himself.

Almost from the moment he took power in 2012, the Chinese leader was so confident that his own country’s rise was unstoppable, and so certain that America was in terminal decline, that he openly boasted about the China-dominated world to come.

He even drew up a series of grandiose plans — China would dominate high tech by 2025, the Asia-Pacific region by 2035 and the world by 2049.

Xi may try to blame his propaganda flacks for overdoing it, but the Chinese people know who is responsible. In backing off the braggadocio, Xi is “slapping his own face,” as the Chinese say.

The Chinese state-run media has been busily throwing up a smokescreen to cover Xi’s retreat. It has launched increasingly unhinged attacks on what it calls the “lunatic,” “insane” and “terroristic” Trump administration.

After all, the masses must be told who to blame for China’s recent economic difficulties.

The official Global Times has even published an article calling for US administration officials to invoke the 25th Amendment and remove Trump from office.

In private, however, senior Chinese officials have come to view Trump as a Sun Tzu-like strategic genius.

Yes, you heard me right.

After the election, Xi Jinping tried to rope Europe and other Asian countries into a new, anti-US coalition, only to see this initiative fail.

The EU recoiled from Xi’s embrace and is now in serious free and fair trade talks with Washington.

Even the Philippines, which Xi tried desperately to woo with the promise of billions in investments, has now backed away from China.

But as Xi was stumbling, Trump went on the offensive. He signed a new trade agreement with South Korea and expanded defense cooperation with Japan and Australia.

Using the threat of tariffs as leverage, he even got Xi to agree to UN sanctions against North Korea, stifling the economy of China’s only formal ally.

[Last] week, with the successful renegotiation of a trade agreement with Mexico and Canada — the USMCA — Trump is now able to control China’s access to the entire North American market.

Beijing officials now realize, even if many in the US foreign policy establishment don’t, that they are facing a master tactician, one who is moving steadily from deal to deal, getting as many concessions as he can, and then moving on the next.

But they also see Trump as not just transactional, but strategic. He is pressuring China not just on the economic front, but on the military and ideological front as well. They fear that his goal is not just to rectify the trade deficit, but to eliminate the threat that a rising China poses to the US.

The Chinese have been set on their heels by an American adversary who quotes Sun Tzu: “The supreme art of war is to subdue the enemy without fighting.”

Only the terms of the surrender remain to be negotiated.

China is eager to resume talks but, as Trump said [last] week, he is in no hurry to reach a deal.

I am pretty sure he means that China is not yet sufficiently subdued.

Steven W. Mosher is the author of “Bully of Asia: Why China’s Dream is the New Threat to World Order.”

Watch an October 9 clip of President Trump answering a question on China:

1. What is the main idea of Steven Mosher’s commentary?

2. The purpose of an editorial/commentary is to explain, persuade, warn, criticize, entertain, praise or answer. What do you think is the purpose of Mr. Mosher’s editorial? Explain your answer.

3. The cartoon below depicts the opposite point of view.
a) How does Mr. Mosher’s opinion differ from that of the cartoonist?
b) With whom do you agree? Explain your answer.
c) Ask a parent the same question.