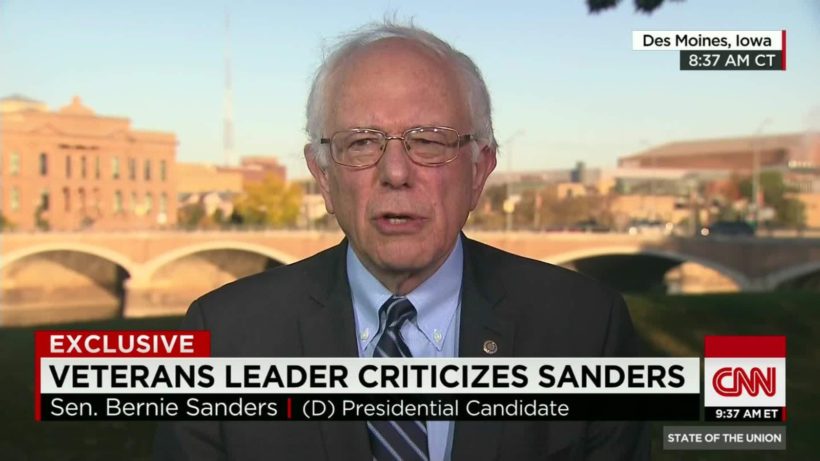 Sen. Bernie Sanders responds to criticism of his leadership when he was the chairman of the Senate Veterans' Affairs Committee. (CNN, February, 2016)

(by Tim Mak, The Daily Beast) – Bernie Sanders’s tenure as chairman of the Senate Veterans Affairs Committee was characterized by glaring neglect of his oversight responsibilities, allowing the 2014 VA scandal to unfold under his watch, veterans’ rights advocates argue.

Sanders has touted his work on veterans’ issues, most recently citing his involvement in “the most comprehensive VA health care bill in this country,” in a February debate.

Left unsaid however, is that he was the chairman of the Senate Veterans Affairs Committee, responsible for overseeing the Department of Veterans Affairs, as the scandal erupted.

Dozens of veterans died while waiting for medical care at Phoenix Veterans Health Administration facilities, a scandal CNN broke in the spring of 2014. The imbroglio spread with reports of secret waiting lists at other VA hospitals, possibly leading to dozens more preventable deaths.

Sen. Sanders held one-sixth of the hearings on oversight that his House of Representatives counterpart held. Republicans griped that they had made multiple requests for more oversight hearings, but received no response. A news host even challenged Sanders as the scandal erupted, saying he sounded more like a lawyer for the VA than the man responsible for overseeing it.

“We feel that he did not live up to his responsibilities as Senate Veterans Affairs Committee (SVAC) chairman to provide oversight into this. He keeps hiding behind the mantle [of the title]. And yes, he did pass the $15 billion piece of legislation, but that’s… akin to closing the barn door after the chickens have escaped,” said Matthew Miller, the chief policy officer of Iraq and Afghanistan Veterans of America.

By the time the scandal broke, Sanders had been chairman for more than a year. While the House VA committee held 42 hearings on VA oversight, the Senate VA committee chaired by Sanders held only about seven hearings on the matter.

“The House needed a partner in the Senate to help flesh out the problems at the VA, and unfortunately Bernie Sanders was not that partner. Florida Rep. Jeff Miller and his House committee were the ones who pursued this and ultimately uncovered [the VA scandal]… only when the VA scandal broke was when [Sanders] ultimately decided to do oversight hearings,” said Dan Caldwell, the vice president for political and legislative action of Concerned Veterans for America.

Even as the scandal was breaking, Sanders was challenged for his defense of the VA.

“You sound like a lawyer defending the hospital, as opposed to a senator trying to make sure the right thing is done,” CNN host Chris Cuomo lectured Sanders as the scandal unraveled.

It was his progressive worldview that blinded him to the problems of the VA, some veterans advocates argued, and it prevented him from seeing the problem as it emerged.

Sanders, some veterans’ rights workers say, wanted to believe that the VA was a model for government-run health care.

“For years, many people within the progressive movement and the left touted the VA as an example of what government-run health care could look like for Americans,” added Dan Caldwell of the Concerned Veterans for America. “Based on Bernie Sanders’s ideology, he wanted the government-run system at the VA to work, because it reinforced his view of what government health care should look like for all Americans, not just veterans.”

Those advocates don’t think his rosy view of what was happening at the VA lined up with reality.

“His worldview got in the way of the facts on the ground. He’s concerned about veterans, but had an almost blind faith in the VA system to where it obscured his view of the situation on the ground as the scandal was unfolding,” said a congressional source close to the legislative negotiations on VA reform.

The problem, the source said, was that Sanders “believed in government, and he believed in it to a fault.”

Ultimately, an emergency piece of legislation was passed that infused money into the VA and created some accountability mechanisms. The Choice Act, as it was called, also allowed vets to find private-care providers if they were unable to schedule medical appointments within 30 days, a major concession that Sanders was forced to make.

“He got backed into a corner and had no choice but to support the bill. The consensus on the committee was strong—to have some more accountability and give veterans some private choices,” Caldwell said. “Bernie just got outgunned… he had no choice. Now he’s turning it around and using it as an example of finding consensus… The bill that passed would have largely passed even if he had walked away.”

The congressional source close to the negotiations said Sanders “helped negotiate this bill and got some of his elements in,” including additional funding for the VA, but only after a late start, having defended the VA during the early days of the scandal.

Sanders cites awards from the American Legion and the VFW as evidence of accomplishments during his time as chairman.

“When vets needed Bernie Sanders to aggressively oversee the VA and hold them accountable, he was AWOL,” Caldwell added.

Posted at The Daily Beast on February 4, 2016.  Reprinted here April 7, 2016 for educational purposes only.

1.  The purpose of an editorial/commentary is to explain, persuade, warn, criticize, entertain, praise or answer. What do you think is the purpose of the editorial?  Explain your answer.