(by Harry R. Jackson, Jr., Townhall.com) – Last month, Catherine Davis and her Atlanta-based Georgia Right to Life organization launched a groundbreaking effort to stop the egregious number of black abortions in their state. The organization decided to use billboards to present its case for life – that’s right – billboards.

The 80-billboard campaign permeates the skyscape of Atlanta. Because of its scale, the campaign is nothing less than cutting-edge innovation. The billboards read, “Black children are an endangered species.” The words encircle the face of an adorable black child. In addition to the message, the only Web address listed is “toomanyaborted.com.” 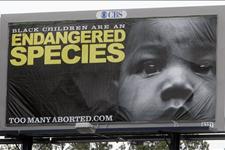 At the Website, the message is very clear. Their research and statistics are complete. The editorials are also compelling. The Georgia Right to Life group has designed a sophisticated communications vehicle. Yet, it all starts with a winsome message from the billboards. The graphics experts say that billboards can only effectively use seven words – just seven words and a visual impression. Therefore the designers tastefully showed the innocence of a beautiful black baby.

This campaign is controversial, not because of its effect on Atlanta drivers or the average Joe. Changing lives by saying, “Respect yourself!” should hardly be controversial. The controversy arises from their effectiveness as record numbers of black girls are going to their Website. Angry pro-abortion groups and Planned Parenthood have attempted to label GRTL as “deceptive.” GRTL is also accused of working against the best interests of young black women. Some even have demeaned Catherine Davis as, you guessed it, a “sell out.” Once again in opponents’ minds, the “naive black crusader” is being used by white extremists. In response to pro-abortion advocates, Davis has also been pitted against them on CNN, NPR, and in a recent New York Times article.

Despite opponents’ vitriol, GRTL’s work is both tasteful and historic. How is it historic? First, its anti-abortion message is direct and hard-hitting. Second, targeting blacks so directly, without condemnation, is revolutionary. This is a major course correction in anti-abortion marketing. As a result, it is finally piercing the cultural veil over the issue of abortion in the black community.

So who is Catherine Davis?

For the last few years she has served tirelessly to give a voice to the voiceless. She focused on positive change through education, local/state involvement, and peaceful action. Davis’s Radiance Foundation and Operation Outrage exposed the destruction of the African-American community through the abortion industry. Then in 2009, Davis became the Minority Outreach Director for the 30-year old organization GRTL. In her new post she simply continued grass root activism. Davis traveled the state of Georgia returning to the real strength of the black community – the Church.

Her education and experience have catapulted her to the forefront of the abortion struggle. She has mobilized a coalition of over a hundred black pastors who have begun to confront the issue of abortion politically. This informal coalition has educated, debated and won over many legislators on both sides of the aisle.

Today, however, a fresh wind is blowing. Recent studies show that black attitudes about abortion are changing nationally. The community is waking up to a truly genocidal trend that cannot be masked by the term “reproductive freedom.”

Catherine Davis’s rise to prominence is a sign that the religious and political landscape is changing. She and other pro-life black champions are passionate because of the horrifying abortion statistics of our day. Since 1973, more than fourteen million African-American babies have been aborted. In Georgia, like most communities in America, the black abortion rate is skyrocketing. Over half of Georgia abortions (57%) are performed on blacks, who make up only 29% of the population.

I want to challenge you to become a part of the growing number of people who are taking a stand against abortion. I also want you to celebrate and congratulate preachers like Bishop Boone of Wellington Boone Ministries, Pastor Clenard Childress of LEARN, and Rev. Johnny Hunter founder of the black pro-life movement and LEARN, who have been blowing a trumpet for years. They have been maligned and persecuted. It’s time to honor them and their message. Become educated about the issue. Speak to others about the genocide that is currently accepted among many Americans.

Respect Yourself and God’s Gift of Life.

Bishop Harry Jackson is the founder and Chairman of the High Impact Leadership Coalition (HILC). He has declared that the church and its leaders must lead the way to protect America’s moral compass and heal our nation.
Bishop Jackson’s radio commentary “The Truth in Black and White” can be heard daily on 400+ stations nationally.

Copyright ©2010 Salem Web Network. All Rights Reserved.  This article was first posted at Townhall.com on March 2, 2010.  Reprinted here on March 11, 2010 for educational purposes only.  May not be reproduced on other websites without permission from Salem Web Network.

1. What do you think Harry Jackson’s purpose was for writing this commentary?

2. Do you think Mr. Jackson makes a valid request: “I want to challenge you to become a part of the growing number of people who are taking a stand against abortion. … Become educated about the issue. Speak to others about the genocide that is currently accepted among many Americans. Respect Yourself and God’s Gift of Life.”
Explain your answer.

3. You know the ‘women’s right to choose’ side of the abortion issue. Visit the Georgia Right to Life webpage toomanyaborted.com to read the other side of the issue and come to your own conclusion.  Discuss these ideas with a parent, then with a friend.  What does each think?