Posted on September 14, 2017 in Thursday's Editorial 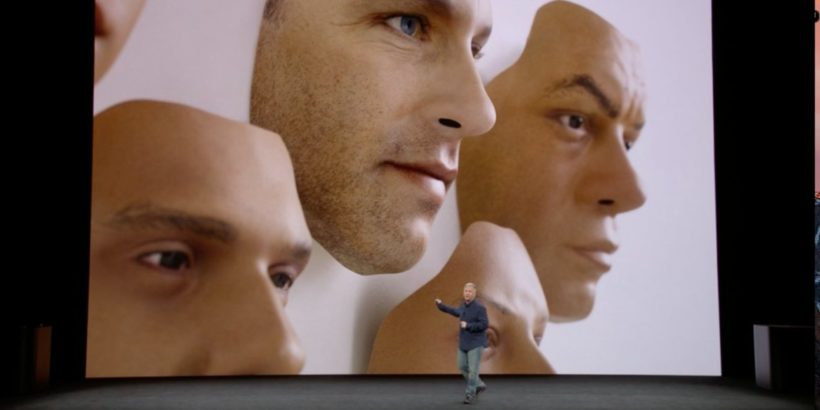 (by Brian Feldman, NYMag .com) – In a small conference room at the offices of New York Magazine, there was one part of Wednesday afternoon’s Apple keynote that caused everyone to go “ooooohh!” That’s ooooohh, the noise you make when someone in class is in trouble, not ooooohh, the noise you make when something has amazed you. It came in response to Apple executive Craig Federighi, who had screwed up the very first live demo of Face ID, Apple’s new device-unlock mechanism.

Face ID, as the name implies, uses four sensors embedded in the front of the iPhone X to scan a user’s face and then unlock the phone. Apple claims it will work in the dark, when you’re wearing glasses or a hat, and if you’ve changed your hairstyle; just as importantly, it won’t work when you’re asleep or looking away.

Upon closer inspection of the keynote, it seems that Federighi was unable to unlock the phone with his face due to a security measure in iOS — rebooted iPhones require a passcode to be entered once before accepting any biometric inputs — and not because Face ID had failed. Rather than input a passcode, he switched to a backup phone. Regardless, to a casual viewer watching the demo on the livestream, it looked like a major goof-up for Apple’s big, new feature.

Assuming Apple’s done its work (and Apple usually does its work), Face ID will be extremely secure and effortlessly functional. But it has a problem. The problem with Face ID — a problem that Apple is clearly aware of — is that it replaces the fingerprint-sensing, phone-unlocking Touch ID.

Face ID is not an additional security mechanism to the way your phone already works. It’s a replacement, because the iPhone X does not have the home button necessary for the fingerprint-scanning Touch-ID system that was introduced with the iPhone 5s in 2013. Apple spent a good amount of time getting ahead of the backlash, demonstrating that the home button’s function had been replicated elsewhere: Siri is now activated via the sleep button! Swiping up now takes you to the Home screen! And they tried to defend the switch from Touch to Face with a fair statistical point: The chances of someone else unlocking your phone with Touch ID are one in 50,000, while with Face ID it’s one in a million.

That being said, assuming it’s composed of some combination of uppercase and lowercase letters and numbers, a four-character passcode is more secure than either, with 14,776,336 possibilities.

But Touch ID was fast, convenient, easy, and it worked with no fuss — and when it didn’t work, it was easy to bypass. Federighi’s screwup, failing to unlock via Face ID in its worldwide debut, highlighted exactly how annoying Face ID is going to be in its early form. When you screwed up a fingerprint unlock, all you needed to do was reposition your finger. Face ID, without that tactile feedback, seems like a guessing game. Do I raise the phone up? Change the angle? Open my eyes wider? More variables to authenticate means more points of failure.

The until-now unappreciated appeal of Touch ID was that you could use it with so little thought: You could, and did, easily unlock your phone before you’d even brought it into your field of view. You didn’t have to remember a passcode, or position your body or your hands anywhere besides where they’d naturally be. There was a kind of discretion to it, a gap between what your hands are doing and what your face is, like Matt Damon in The Departed, tapping out a warning on his dumbphone’s keypad without taking it out of his coat pocket.

Touch ID was a way of getting into your phone without also taking yourself completely out of the current moment. Face ID, for all of its supposed benefits, will make the act of checking one’s phone even more of a disruption in social settings — worse, it makes unlocking your phone a kind of performance, adding another small but disruptive step to the unlock sequence. Don’t even get me started on the potential Face ID has to devastate the movie-going experience. Or how dangerous this is going to be for drivers.

It was maybe the most audible rendition of a theme that bugged me throughout Apple’s announcements today: how involved you need to be to use your phone.

The iPhone X demo focused on facial recognition and mapping — transferring user expressions into the phone’s software and mapping it onto other functions, like Face ID, or Animoji. This stuff is cool, but it means that if you want to take advantage of Apple’s new marquee features, you have to stop what you’re doing and give the iPhone X your full attention. And why wouldn’t you give a phone with such a large, entrancing screen your attention?

Much hand-wringing has been done about how smartphones are raising a generation entranced by screens and uninterested in their immediate surroundings. Apple’s latest will further that paranoia.

Of course, it’s possible I’m wrong. Maybe Face ID, powered by lightning-fast processors, will be a breeze to master, and people won’t be offended when you break eye contact and pause the conversation to stare at the glossy piece of metal in your hand. Yet at the very least, there will be a learning curve both functional and social to get over — a curve that not even Apple’s highest executives have mastered yet.

Update: This post has been updated to more accurately reflect the specific circumstances of Federighi’s demo.

Published September 12, 2017 at NYMag .com. Reprinted here September 14, 2017 for educational purposes only. May not be reproduced on other websites without permission from New York Magazine.

1. What is the main idea of Brian Feldman’s commentary?

2. The purpose of an editorial/commentary is to explain, persuade, warn, criticize, entertain, praise or answer. What do you think is the purpose of Mr. Feldman’s editorial? Explain your answer.

3. Tone is the attitude a writer takes towards his subject: the tone can be serious, humorous, sarcastic, ironic, inspiring, solemn, objective, cynical, optimistic, encouraging, critical, enthusiastic… Which word do you think best describes the tone of economist Brian Feldman’s commentary? Explain your answer.

4. What is your reaction to Apple’s Face ID (with many others to follow)? Positive, negative or ambivalent? Explain your answer.
b) Ask a parent the same question.