Posted on December 6, 2018 in Thursday's Editorial 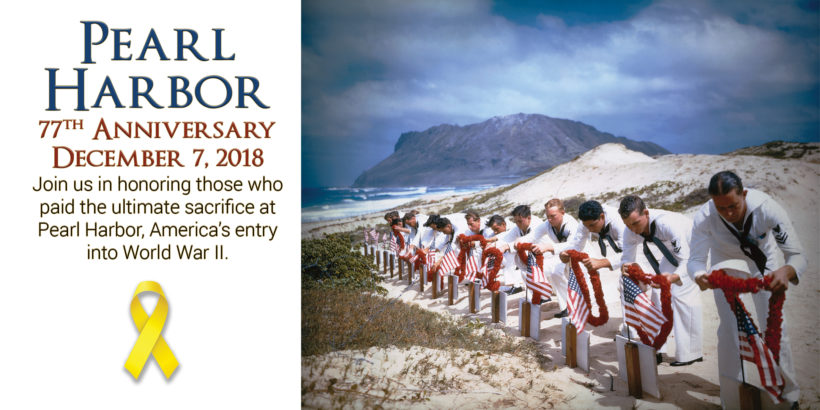 (by Paul Greenberg, Townhall) – Some memories never fade, and shouldn’t.

The news, like the attack, came out of the blue. So did an email I got relaying an old-timer’s memories of that day, a day that would live in infamy. His daughter…in Connecticut was kind enough to relay them to me…

Why me? Because, she explained, “I recently came across your 2011 article about remembering Pearl Harbor. The article prompted a discussion with my father, who related his memory of December 7th. Thanks to your article, our family has the following first-hand account of the day.” And thanks to her and her father, Robert Cunningham, I can share his memories with you…on the (73rd) anniversary of that fateful day. Mr. Cunningham remembers:

“I was a newspaper delivery boy for the Hartford Courant during the fall of 1941. During that time, the Courant was holding a subscription drive. Each paperboy who signed up a new subscriber was invited to a banquet dinner at the Bond Hotel in Hartford. The award dinner for hundreds of delivery boys was held late in the afternoon of December 7, 1941. In addition to the dinner, the Courant arranged entertainment for us. There were clowns, juggling and local sports heroes.

“In the midst of the festivities there was a lot of commotion on the stage. Eventually someone came on stage and announced that the Japanese had attacked Pearl Harbor. Many of us had no idea where Pearl Harbor was located. The speaker explained the importance of the naval base at Pearl Harbor. Being paperboys, we were also informed that the Hartford Courant would be publishing an evening Extra edition that would be published as additional information was received. We were asked to report to our normal newspaper delivery location to wait for the special edition.

“I took the bus back to my usual delivery location in West Hartford and waited and waited. When the Extra edition did not arrive, I joined other young paperboys and took the bus back to the Hartford Courant at State Street in Hartford to wait for the edition to come off the press. When we arrived at the Courant building, there were stacks and stacks of papers waiting to be delivered. At that point we took the papers and ran into the streets of Hartford delivering papers to a city eager for news of Pearl Harbor.

“The demand for news was so intense that we stayed out in the streets until late into the night selling papers. As the demand for papers in the city of Hartford subsided, we went back to our local neighborhoods and our established routes to deliver the news to our neighbors. These are just the memories of a 13-year-old paperboy who barely understood the significance of [the] Day That Will Live in Infamy.” A Marine rifle squad fires a volley over the bodies of fifteen officers and men killed at Naval Air Station Kanoehe Bay during the Pearl Harbor raid. These burial ceremonies took place on 8 December 1941, the day after the attack. Note sandbagged emplacement atop the small hill in the right middle distance. (Official U.S. Navy Photograph, now in the collections of the National Archives.)

To those who lived through that time, and still remember the Americans who didn’t, that day and that war still lives. Seared into memory. Not enough of us today will think of those Americans who gave their lives in the jungles of the Pacific or in the skies above Europe, who fought in North Africa or on the beaches of Sicily and Normandy or wherever they were sent to defend not only their country but the cause of freedom around the world. Cut down before their time, they never grew old. Still young in their fresh soldier boy’s uniforms or coats of Navy blue, their pictures still stand somewhere almost lost among all the others atop crowded mantles and chifferobes across the country, their gazes fixed on us from the past. If we would only look. And learn.

The now aged veterans who survived that terrible conflict might have been with Jimmy Doolittle for 30 minutes over Tokyo, a daring raid that revived American spirits in the midst of initial defeat after defeat and retreat after retreat. Or they might have made it to the victorious end aboard the battleship Missouri, where the unconditional surrender was signed after those blinding flashes that destroyed the populations of whole cities. Wherever they are, they will remember this day — as we should remember them.

The country would experience another Day That Will Live in Infamy on September 11, 2001, and once again resolve to see the struggle through to the inevitable victory, so help us God. Yet the memory of that day, too, like the country’s resolve, already fades. Appeasement comes back into fashion if by more polite names. Once again Western statesmen draft diplomatic deals and issue press releases proclaiming peace in our time. Once again, defense budgets are cut as America withdraws from the world stage. With the usual results: Aggression goes unchecked, a bloody civil war rages in Syria as it once did in Spain, fanaticism prospers, and the next Day of Infamy is invited while America sleeps.

Today the memories indelibly etched in a young paperboy’s mind on December 7th, 1941, and now part of his family’s heritage, come back strong, if only for a passing day. Those memories need to be kept alive, powerful and vivid, from generation to generation, and their lesson remembered.

There are many other Robert Cunninghams in this still great country, this sleeping giant more than one vainglorious aggressor has made the mistake of awakening, and their stories need to be told and preserved, too. Which is another reason why the veterans of that terrible war, the diminishing number of them we still have with us, should record their memories for posterity. Because they’re all part of your heritage, America.

Originally published December 7, 2013.  Reprinted here on December 6, 2018, for educational purposes only. May not be reproduced on other websites without permission from Townhall. (Previously posted at StudentNewsDaily on Dec. 4, 2014 and Dec. 1, 2016.)

1. The purpose of an editorial/commentary is to explain, persuade, warn, criticize, exhort, entertain, praise or answer. What do you think is the purpose of Paul Greenberg’s editorial? Explain your answer.

2. Tone is the attitude a writer takes towards his subject: the tone can be serious, humorous, sarcastic, ironic, inspiring, solemn, objective, cynical, optimistic, critical, enthusiastic…etc.
Which word do you think best describes the tone of the commentary? Explain your answer.

CHALLENGE: Listen to President Franklin D. Roosevelt’s entire Dec. 8, 1941 “Infamy” speech to Congress (see video under “Resources” below). What surprises you about the President’s speech? About Congress’ reaction?