Only Eight Justices? So What

Posted on February 25, 2016 in Thursday's Editorial 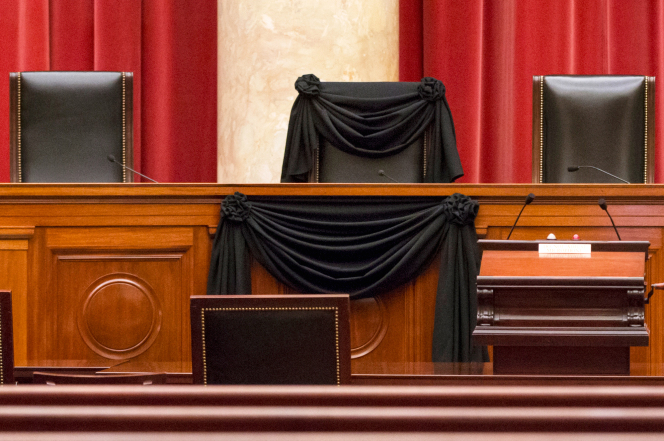 Supreme Court Justice Antonin Scalia's courtroom chair (center) is draped in black to mark his death as part of a tradition that dates to the 19th century.

(by Josh Blackman and Ilya Shapiro, The Wall Street Journal) – Justice Antonin Scalia ’s death leaves the Supreme Court in a tough spot, but it is one for which the institution is prepared. Due to death, retirement or resignation—or recusal in individual cases—the high court has often been short-handed. Since World War II there have been 15 periods when the court had eight justices, and each time the court managed its docket without a hitch.

Even in the rare cases when eight justices split evenly, 25 times the court affirmed the lower-court judgment without opinion (or precedential value) and 54 times the court set the case for reargument. The former approach allowed the issues to be raised again in similar future cases. The latter allowed for proper resolutions once the ninth justice joined—and only 25 of those cases ended up 5-4, meaning the new justice made no difference in over half of the reargued cases.

In other words, rather than making the judicial system grind to a halt, a Supreme Court vacancy merely delays rulings in a small number of cases. A study of the past 60 years of eight-justice rosters reveals that today’s Roberts court can easily handle the current vacancy, however long it lasts. Some notable examples:

In May 1945, President Truman selected Justice Robert H. Jackson to serve as chief prosecutor at the Nuremberg Tribunals. From then until Jackson’s return in October 1946, the court set three cases for reargument. One was the landmark Adamson v. California, where the court held that the Bill of Rights placed no limits on state action. Adamson was originally argued in January 1946, while Jackson was abroad, then reheard in January 1947. It was finally decided in June 1947, with Jackson the tiebreaking vote.

The next significant short-handed court came when Justice Jackson died in October 1954. His replacement, John Marshall Harlan II, wasn’t confirmed until March 1955. The five-month vacancy required three cases to be reargued, including the important Toth v. Quarles regarding the relationship between military and civilian courts. Toth ended up 6-3, but Justice Harlan cast the deciding vote in the other two, including a precedent for lawsuits against the federal government, Indian Towing Co. v. U.S.

That seat was empty for a year until Harry Blackmun, President Nixon’s nominee, was confirmed in June 1970. During this period eight cases yielded 4-4 decisions, and 18 cases had to be reargued. Blackmun cast the tiebreaking vote in six of the reargued cases, including Baird v. State Bar of Arizona, which prevented states from excluding attorneys who belonged to the Communist Party.

On Sept. 17, 1971, Justice Hugo Black resigned, and six days later Justice Harlan died. From September 1971 through January 1972, the court had seven justices. On Dec. 13, 1971, the septet heard Roe v. Wade. The court waited for reinforcements before deciding such a momentous case, though six of the seven justices would vote to invalidate a Texas abortion law. A second round of argument was scheduled for October 1972 with newly confirmed justices Lewis Powell and William Rehnquist. On Jan. 22, 1973—303 days after the first argument—Roe was decided 7-2. Three criminal-procedure cases were also reargued, each breaking down 5-4.

Justice William O. Douglas resigned on Nov. 12, 1975, but his seat had effectively been vacant since New Year’s Eve 1974, when he suffered a stroke. His eight colleagues agreed to reargue any cases where Douglas was the pivotal vote. After Justice John Paul Stevens was confirmed in December 1975, the court reheard five such cases. One was the 5-4 decision in National League of Cities v. Usery, which held that the 10th Amendment stopped Congress from regulating state labor markets.

Fast-forward to the Reagan administration. Justice Powell announced his retirement on June 26, 1987, and on July 1 President Reagan nominated Robert Bork. On Oct. 23 the Senate rejected Bork 58-42. Reagan announced Douglas Ginsburg as his next nominee, but he abruptly withdrew after his past marijuana use was revealed (that used to disqualify you from prominent positions in Washington). Reagan then nominated Anthony Kennedy, who was confirmed in February 1988. This contentious backstory prevents the Kennedy appointment from serving as a precedent for election-year confirmations.

During the eight months between Powell’s departure and Justice Kennedy’s arrival, the court affirmed three cases 4-4, and set four cases for reargument. In a preview of swing votes to come, Justice Kennedy broke ties in each of these later 5-4 decisions.

The most recent relevant turnover occurred in 2005. Chief Justice Rehnquist died on Sept. 3, 2005, and the Senate confirmed John G. Roberts as chief justice on Sept. 29. Although Justice Sandra Day O’Connor had announced her retirement months earlier, she promised to stay on the court until her replacement was confirmed. That ended up being Justice Samuel Alito, who was confirmed in January 2006. During her brief “lame duck” period, Justice O’Connor would have cast the tiebreaking vote in three cases, all of which were reargued instead. In all three cases—involving the death penalty, “knock-and-announce” warrants, and the First Amendment rights of public employees—Justice Alito cast the decisive vote.

This history shows that today’s court is more than capable of doing its work with eight justices. By far the majority of cases the Roberts court decides aren’t closely contested. Last term only 19 of the 74 decided cases went 5-4. Of those, Justice Scalia was in the majority only six times. Yet regardless of what happens in any particular case, Justice Scalia’s absence—while a huge loss for the nation—hardly hampers the functioning of the Supreme Court even if his seat remains vacant until after the election.

Mr. Blackman is a constitutional law professor at the South Texas College of Law. Mr. Shapiro is a senior fellow in constitutional studies at the Cato Institute. Both have filed briefs on Cato’s behalf in pending Supreme Court cases.

Published February 23, 2016 at The Wall Street Journal. Reprinted here Feb. 25, 2016 for educational purposes only. Visit the website at wsj .com.

3. The writers state, “This history shows that today’s court is more than capable of doing its work with eight justices.”  They give multiple examples to prove their point and conclude:  “Regardless of what happens in any particular case, Justice Scalia’s absence—while a huge loss for the nation—hardly hampers the functioning of the Supreme Court even if his seat remains vacant until after the election.”  Do you think they proved their assertion?  Explain your answer..