Not Yours To Give

Posted on November 12, 2009 in Thursday's Editorial

“I cannot undertake to lay my finger on that article of the Constitution which granted a right to Congress of expending, on objects of benevolence, the money of their constituents…”
-James Madison

My paternal ancestors settled in East Tennessee about 10 years before it was admitted to the Union (1796). Not far from where they settled lived a fellow who was the region’s most famous frontiersman. 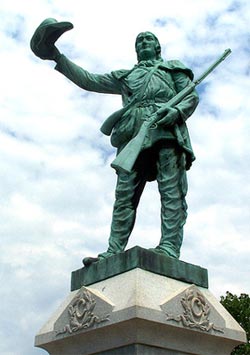 David Crockett was his name.

He has been immortalized as a folk hero, known for his battles with the Red Stick Creek Indians under Andrew Jackson, and his last stand at the Alamo with fellow Patriots James Bowie from Kentucky and William Travis from South Carolina.

Crockett battled the Creek side-by-side with fellow Tennessean Sam Houston, but both men were friends to the Cherokee clans, which were composed of highly civilized native peoples living in the border regions between Tennessee and North Carolina.

At the end of his formal service as a soldier, he was elected Lieutenant Colonel of the Tennessee Militia.

Crockett is less known for the several terms he served in Congress between 1827 and 1835 during the presidency of his old commander, Andrew Jackson. …

Though he had little formal education, Crockett exuded a commanding presence and was feared, if not loathed, by his more refined congressional colleagues for his backwoods rhetoric.

In one of his more legendary orations, Crockett proclaimed:

“Mr. Speaker … the gentleman from Massachusetts [Mr. Everett] talks of summing up the merits of the question, but I’ll sum up my own. In one word I’m a screamer, and have got the roughest racking horse, the prettiest sister, the surest rifle and the ugliest dog in the district. I’m a leetle the savagest crittur you ever did see. My father can whip any man in Kentucky, and I can lick my father. I can out-speak any man on this floor, and give him two hours start. I can run faster, dive deeper, stay longer under, and come out drier, than any chap this side the big Swamp. I can outlook a panther and outstare a flash of lightning, tote a steamboat on my back and play at rough and tumble with a lion, and an occasional kick from a zebra.” …….

Though his rhetoric may have been unorthodox, Crockett was a man of principle.

His fervent opposition to Andrew Jackson’s Indian Removal Act of 1830 (forcing removal of the peaceful Cherokee tribes along the infamous “Trail of Tears”) cost Crockett his congressional seat, but he declared, “I bark at no man’s bid. I will never come and go, and fetch and carry, at the whistle of the great man in the White House no matter who he is.”

But it was Crockett’s stalwart opposition to unconstitutional spending that is most worth noting given today’s congressional penchant for such spending in the trillions.

According to the Register of Debates for the House of Representatives, 20th Congress, 1st Session on April 2, 1828, Crocket stood to challenge the constitutionality of one of the earliest welfare spending bills, a [monetary] distribution to the family of a military officer after his death.

While the exact text of his speech was not transcribed (not the practice in those years), the spirit of his words in regard to those proceedings was captured in an 1867 Harper’s Magazine article entitled “Not Yours to Give” by Edward Ellis.

According to Ellis, Crockett objected to the expenditure:

“Mr. Speaker; I have as much respect for the memory of the deceased, and as much sympathy for the sufferings of the living, if suffering there be, as any man in this House, but we must not permit our respect for the dead or our sympathy for a part of the living to lead us into an act of injustice to the balance of the living. I will not go into an argument to prove that Congress has not the power to appropriate this money as an act of charity. Every member upon this floor knows it. We have the right, as individuals, to give away as much of our own money as we please in charity; but as members of Congress we have no right so to appropriate a dollar of the public money. Some eloquent appeals have been made to us upon the ground that it is a debt due the deceased. Mr. Speaker, the deceased lived long after the close of the war; he was in office to the day of his death, and I have never heard that the government was in arrears to him.

“Every man in this House knows it is not a debt. We cannot, without the grossest corruption, appropriate this money as the payment of a debt. We have not the semblance of authority to appropriate it as charity. Mr. Speaker, I have said we have the right to give as much money of our own as we please. I am the poorest man on this floor. I cannot vote for this bill, but I will give one week’s pay to the object, and if every member of Congress will do the same, it will amount to more than the bill asks.”

Ellis recounts that Crocket was later asked by a friend why he had opposed the appropriation, and he replied:

“Several years ago I was one evening standing on the steps of the Capitol with some other members of Congress, when our attention was attracted by a great light over in Georgetown. It was evidently a large fire. We jumped into a hack and drove over as fast as we could. In spite of all that could be done, many houses were burned and many families made houseless, and, besides, some of them had lost all but the clothes they had on. The weather was very cold, and when I saw so many women and children suffering, I felt that something ought to be done for them. The next morning a bill was introduced appropriating $20,000 for their relief. We put aside all other business and rushed it through as soon as it could be done.”

Crocket explained, “The next summer, when it began to be time to think about election, I concluded I would take a scout around among the boys of my district. I had no opposition there, but, as the election was some time off, I did not know what might turn up. When riding one day in a part of my district in which I was more of a stranger than any other, I saw a man in a field plowing and coming toward the road. I gauged my gait so that we should meet as he came to the fence. As he came up, I spoke to the man. He replied politely, but, as I thought, rather coldly.

“I began: ‘Well, friend, I am one of those unfortunate beings called candidates, and…”

His constituent interrupted, “Yes I know you; you are Colonel Crockett. I have seen you once before, and voted for you the last time you were elected. I suppose you are out electioneering now, but you had better not waste your time or mine, I shall not vote for you again.”

Crockett replied, “This was a sockdolager … I begged him to tell me what was the matter.”

The farmer said, “Well, Colonel, it is hardly worth-while to waste time or words upon it. I do not see how it can be mended, but you gave a vote last winter which shows that either you have not capacity to understand the Constitution, or that you are wanting in the honesty and firmness to be guided by it. In either case you are not the man to represent me. But I beg your pardon for expressing it in that way. I did not intend to avail myself of the privilege of the constituent to speak plainly to a candidate for the purpose of insulting or wounding you. I intend by it only to say that your understanding of the Constitution is very different from mine; and I will say to you what, but for my rudeness, I should not have said, that I believe you to be honest. But an understanding of the Constitution different from mine I cannot overlook, because the Constitution, to be worth anything, must be held sacred, and rigidly observed in all its provisions. The man who wields power and misinterprets it is the more dangerous the more honest he is.”

Crocket responded, “Well, my friend; I may as well own up. You have got me there. But certainly nobody will complain that a great and rich country like ours should give the insignificant sum of $20,000 to relieve its suffering women and children, particularly with a full and overflowing Treasury, and I am sure, if you had been there, you would have done just as I did.”

But the farmer fired back, “It is not the amount, Colonel, that I complain of; it is the principle. In the first place, the government ought to have in the Treasury no more than enough for its legitimate purposes. But that has nothing with the question. The power of collecting and disbursing money at pleasure is the most dangerous power that can be entrusted to man. … So you see, Colonel, you have violated the Constitution in what I consider a vital point. It is a precedent fraught with danger to the country, for when Congress once begins to stretch its power beyond the limits of the Constitution, there is no limit to it, and no security for the people.”

Thus, Crockett explained of his opposition to support the widow of that distinguished military officer: “Now, sir, you know why I made that speech yesterday.”

It is not known how much of Ellis’s account is fact mixed with the annals of Crockett legend, but it is known that the account is consistent with Crockett’s character, and his support for our Constitution.

Today, there are but a handful of Senate and House incumbents who dare support and defend the Constitution as Crockett did. But there are candidates emerging around the nation who, with our support, will deliver orations as brazen and eloquent, and stand firm behind those words.

1. What is the main point of Mark Alexander’s commentary?

2. What belief does Mr. Alexander share with Davy Crockett?

3. Discuss this commentary with a parent. Ask if he/she agrees with the main idea and to explain why or why not.

Read a biography of Davy Crockett at americanwest.com/pages/davycroc.htm.