No, Sweden and Denmark are not socialist 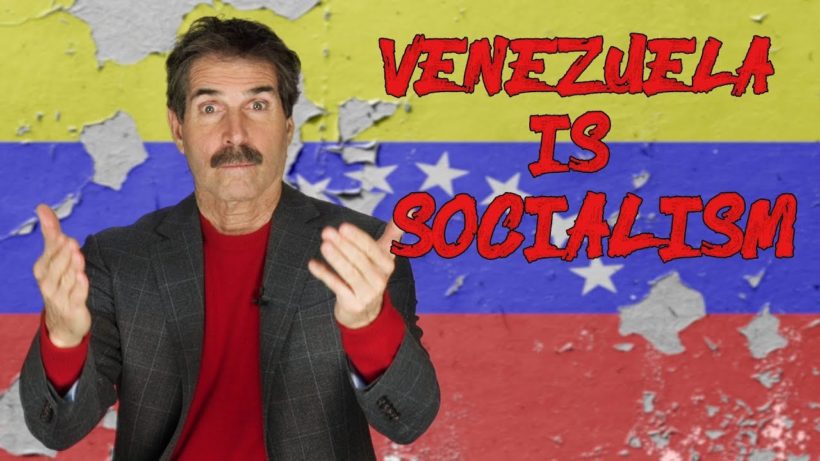 (by John Stossel, Reason) – Venezuela is a disaster.

Yet 20 years ago, it was the wealthiest country in Latin America. It still has the world’s biggest oil reserves. It should be a happy and prosperous nation.

But then Venezuela went socialist. Democratic socialist to be exact. They voted for it. Hugo Chavez promised the poor “social and economic reforms.” The majority of voters believed him.

So did many American leftists.

Model Naomi Campbell traveled to Venezuela to give Chavez a hug. She called him “a rebel angel.”

But now that the socialists created much more extreme poverty, I would think that progressives would realize that democratic socialism is not the route to paradise.

But no, nothing convinces a dedicated socialist—or much of the media.

A popular Vox video titled “The collapse of Venezuela, explained” never once mentions socialism. Instead, it says Venezuela collapsed because “oil prices plummeted in 2014 and Maduro failed to adjust.”

But mismanagement is what happens under socialist governments. It always happens.

That’s because no group of central planners is wise enough to manage an entire economy. Even if they have good intentions, socialists eventually run out of other people’s money.

In Venezuela, the solution was to print more money. That caused massive inflation.

When businesses raised prices to try to keep up with inflation, Hugo Chavez and Nicolas Maduro called that “profiteering” and punished many by confiscating their businesses.

The socialists claimed they would run those businesses better than greedy capitalists could because they weren’t obsessed with profits. Without the “excess” profits, prices would be lower and more money would go to the poor.

But pursuit of profit is what makes an economy work! I’d think the collapse of nations such as Venezuela, China, Russia, Korea, Vietnam, Cambodia, and Cuba would have taught the socialists that. But no.

In America, progressives claim that socialism is succeeding in much of Europe. John Oliver claims, “There are plenty of socialist countries that look nothing like Venezuela.”

Presidential candidate Bernie Sanders agrees, saying: “When I talk about democratic socialism, I am not looking at Venezuela. I’m not looking at Cuba. I’m looking at countries like Denmark, like Sweden.”

But those countries are not socialist!

Yes, they have big welfare programs, but their economies are more capitalist than America’s:

Not only are Scandinavian countries not socialist, lately they’ve reduced government control of their economies.

Denmark privatized the national phone system and the railroads—and sold the Copenhagen airport to a private company.

Swedish economic historian Johan Norberg points out: “We did have a period in the 1970s and 1980s when we had something that resembled socialism, big government that taxed and spent heavily. (But) that’s the period in Swedish history when our economy was going south.”

So Sweden reduced government’s role, too. They privatized businesses and even instituted school choice.

The progressives are just wrong. Scandinavian countries that they call “socialist successes” are not socialist, and they’re moving toward more capitalism. It’s astounding that the progressives keep winning votes peddling economic nonsense.

I asked Stossel TV’s Gloria Alvarez to go to Florida to interview recent Venezuelan immigrants about socialism. Most gave answers like “I wouldn’t recommend it to anyone” and “It’s never gonna work!”

It never will. Never.

As libertarian economist Ludwig von Mises wrote: “The champions of socialism call themselves progressives, but they recommend a system which is characterized by rigid observance of routine and by a resistance to every kind of improvement… They promise the blessings of the Garden of Eden, but they plan to transform the world into a gigantic post office, every man but one a subordinate clerk.”

Until progressives learn that, tragedies like Venezuela will happen again and again.

Published March 27, 2019 at Reason .com. Reprinted here March 28, 2019 for educational purposes only. May not be reproduced on other websites without permission from Reason.

NOTE: Before answering the questions, watch the video under “Resources” below.

1. What is the main idea of Mr. Stossel’s commentary?

2. What point does Mr. Stossel make about Scandinavia?

3. The purpose of an editorial/commentary is to explain, persuade, warn, criticize, entertain, praise or answer. What do you think is the purpose of John Stossel’s editorial? Explain your answer.

4. Has Mr. Stossel’s commentary and video caused any change to your view of socialism? Explain your answer.