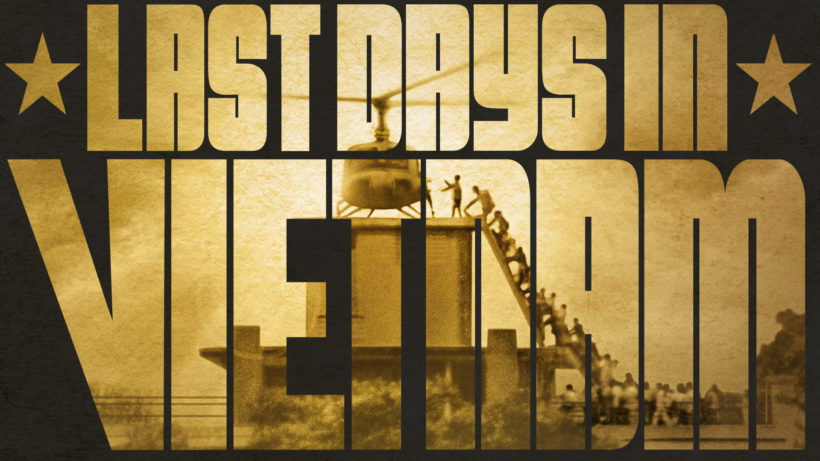 (by Kyle Smith, National Review) – What everyone knows about the Vietnam War is that it was unwinnable, that the South Vietnamese didn’t much want us there, and that our military involvement was a moral outrage that did us all deep dishonor.

We know all of this from the movies, don’t we? And yet there is a movie that shows it up for the pack of lies that it is. It’s a brilliant, harrowing, emotionally potent documentary by a director with unimpeachable liberal credentials — a Kennedy, no less.

The 42nd anniversary of the fall of Saigon on Sunday was an excellent opportunity to revisit what happened between the Paris Peace Accords of 1973, in which the North Vietnamese Communists agreed to a ceasefire and accepted democratic elections in the South, and the spring of 1975, when a failure of American will allowed the Communists to reverse the result for which so much blood had been spilled.

Last Days in Vietnam, the Oscar-nominated 2014 film by Rory Kennedy (the youngest child of Senator Robert F. Kennedy, who died before she was born) is available for streaming on Netflix. It’s a devastating counterpunch to the anti-American propaganda Hollywood and the rest of the leftist culture have been spewing about Vietnam for more than four decades.

Kennedy’s film should make us angry only that America didn’t go far enough. South Vietnam could have been another South Korea if our cultural-political resolve had just remained steadfast at the crucial moment. It’s as if we spent years painstakingly building a billion-dollar palace, then let termites destroy it rather than spending money on an exterminator.

Mixing in interviews with, among others, Henry Kissinger and Richard Armitage, who was then a Special Forces adviser, as well as astonishing archival footage of the events of 1975 in Saigon, the film explains that the North Vietnamese were “terrified” of President Nixon in 1974. The Paris Peace Accords had sparked a full withdrawal of American troops, and Nixon had warned in writing that the U.S. would “respond with full force” if the North failed to abide by the ceasefire terms. But after Nixon’s resignation in August of 1974, says then-CIA analyst Frank Snepp in the film, “Hanoi saw the road to Saigon as being wide open.”

In the spring of 1975, the North Vietnamese army scythed through South Vietnam with astonishing force. Five thousand or so Americans and their families were all that remained of the U.S. presence, and when President Ford asked Congress for $700 million in new military aid, he was scorned, to the undying shame of the lawmakers in question. Democratic senator John McClellan of Arkansas said, “I think it is too late to do any good. Further military aid could merely prolong the conflict and perhaps postpone briefly the inevitable — a Communist victory.”

The U.S. ambassador, Graham Martin, who had lost his only son in combat earlier in the war, was tragically slow to respond as the Communist army rampaged through the South in April. Not until the airport in Saigon had been shelled, on the morning of April 29, 1975, did he order an evacuation to begin. Armed Forces radio played the prearranged signal that all was lost, announcing that it was “105 degrees and rising,” followed by a playing of Bing Crosby’s “White Christmas.”

Soon a photographer snapped a picture of a helicopter landing on the roof of the apartment where the CIA’s deputy station chief lived, and the chaos metastasized. (The photo would later be erroneously described as having been taken at the embassy.) A tamarind tree in the parking lot of the embassy that Martin had frequently called “as steadfast as the American commitment in Vietnam” was chopped down to create room for evacuation helicopters to land.

Kennedy’s film locates one devastating emotional moment after another. When a pilot landed his chopper at the embassy with orders to take the ambassador and flee, the ambassador simply refused to board, ushering dozens of Vietnamese on board in his place to be taken out to the safety of U.S. ships at sea. Hundreds more would follow as Martin repeatedly declined to leave.

South Vietnamese helicopter pilots scrambled to airlift their families out to the nearest ship, the U.S.S. Kirk, with each aircraft simply shoved overboard by the crew when it had done its work. Miki Nguyen, then a boy of six, remembers that his South Vietnamese father landed a gigantic Chinook on a playground to pick him up along with his mother and siblings. The bird was far too large to land on the Kirk, so each member of the Nguyen family in turn simply jumped to safety below; one, a year-old baby, was caught by one of the men on the deck. The pilot, Ba Nguyen, while flying the twin-rotor aircraft just feet above the sea, somehow managed to extricate himself from his flight suit, tilt the bird to the right, and jump out the door to the left, maybe 20 feet from the rotors. Kennedy delivers spectacular footage of the episode.

Some 75 Marine pilots shuttled Americans and Vietnamese out of the embassy on helicopters all day and deep into the night. “You’re very tired, and you’re not seeing an end to this thing,” one pilot recalls in the film. “And the word comes back: ‘No. Marine pilots don’t get tired.’” North Vietnamese tanks would be spotted in the Saigon streets nearby by 7:45 the morning of April 30. The last eleven Americans left the embassy at 7:58.

The effort Kennedy documents so vividly led to the rescue of 77,000 Vietnamese. The immense courage and honor of the heroes depicted in the film, and the clamor of the South Vietnamese to receive their share of American liberty as Communism descended upon their homeland, make for an eloquent rejoinder to those who dismiss the entire war as a misbegotten mess. Our troops earned a victory in Southeast Asia that as of 1974 was all but secure. Washington betrayed them and the people of South Vietnam in equal measure.

Published May 3, 2017 at nationalreview .com. Reprinted here May 5, 2017 for educational purposes only. May not be reproduced on other websites without permission.

1.  What is the main idea of Mr. Smith’s commentary?

2.  The purpose of an editorial/commentary is to explain, persuade, warn, criticize, entertain, praise or answer. What do you think is the purpose of Kyle Smith’s editorial? Explain your answer.

3.  Tone is the attitude a writer takes towards his/her subject: the tone can be serious, humorous, sarcastic, ironic, inspiring, solemn, objective, cynical, optimistic, critical, enthusiastic…etc.  Which word do you think best describes the tone of Mr. Smith’s commentary?  Explain your answer.

4. a) After reading this commentary/movie review, will you watch Last Days in Vietnam? Explain your answer.
b) Ask a parent the same question.

Watch a clip from the movie below: