Posted on November 19, 2015 in Thursday's Editorial 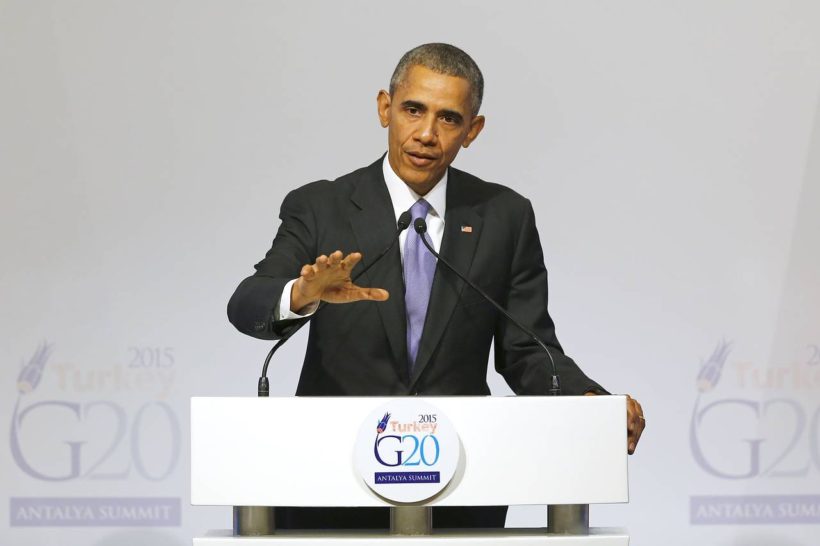 President Obama at the G20 in Turkey addresses the refugee crisis.

(by James Taranto, The Wall Street Journal) – As of Monday morning a handful of governors were vowing to resist Obama administration plans to resettle Syrian refugees in their states. As of Tuesday morning, CNN put the count at 27, with only seven governors, all Democrats, saying their states will welcome the Syrians. President Obama likely helped catalyze this cross-country revolt with a dreadful performance in a press conference yesterday at Antalya, Turkey.

The president came off as impassive as he discussed last week’s attacks in Paris. He turned prickly under repeated questioning about his own underestimation of the Islamic State—which he denied, even when a reporter mentioned his January 2014 dismissal of the group as “the jayvee team.”

But he got passionate when the subject turned to Republicans who disagree with him on the refugee question:

When I hear folks say that, well, maybe we should just admit the Christians but not the Muslims; when I hear political leaders suggesting that there would be a religious test for which a person who’s fleeing from a war-torn country is admitted, when some of those folks themselves come from families who benefitted from protection when they were fleeing political persecution—that’s shameful. That’s not American. That’s not who we are. We don’t have religious tests to our compassion. . . .

When Pope Francis came to visit the United States, and gave a speech before Congress, he didn’t just speak about Christians who were being persecuted. He didn’t call on Catholic parishes just to admit to those who were of the same religious faith. He said, protect people who are vulnerable.

But Yahoo! News’s Michael Isikoff last week reported that the administration is in fact on the verge of imposing just the sort of “religious test” the president claims to disavow:

The Obama administration is moving to designate the Islamic State’s murderous attacks on the Yazidi in Iraq an act of “genocide,” an extremely rare move intended to ratchet up international pressure against the terror organization, administration officials tell Yahoo News.

The action, which sources say could be announced by Secretary of State John Kerry in the next few weeks, has been pushed by top officials at the human rights and religious freedom offices at the State Department.

The Yazidi are a religious minority whose faith “incorporates elements of Christianity and Islam.”

“A genocide designation would have significant policy implications for American efforts to restore property and lands taken from the minority groups and for offers of aid, asylum, and other protections to such victims,” the Hudson Institute’s Nina Shea writes for National Review. Christians are not being considered for the genocide designation, Shea notes, although they are “also among the most vulnerable religious minority groups that have been deliberately and mercilessly targeted for eradication by ISIS.”

So Obama’s objection is not to “religious tests” per se, but to favorable treatment of Christians. It is of a piece with his February speech to the National Prayer Breakfast, in which he bizarrely lectured Christians to get off their “high horse” and remember the Crusades, while also claiming that ISIS and other Muslim terrorists are “betraying” Islam.

Apprehension about admitting Muslim Syrian refugees is motivated by fear. It is “The Return of Republican Islamophobia,” according to the title of a piece yesterday by New York magazine’s Jonathan Chait. He writes that “figures like Ted Cruz and Jeb Bush are calling for the United States to admit only Christian refugees, thereby positioning the United States as indifferent to ISIS’s primary victims,” by which he means Muslims. So are Yazidis secondary victims and Christians tertiary ones, or the other way around? Chait doesn’t say.

But a phobia is an irrational fear, and the attacks in Paris are nothing if not a reminder that fear of Islamic terrorism is rational. The Wall Street Journal reported on Monday that one of the Paris attackers came in as part of the wave of Syrian refugees:

Authorities in France and Greece have said that fingerprints taken from the remains of a suicide bomber outside France’s national sports stadium, the Stade de France, match the prints of a man who entered Europe via the Aegean island of Leros on Oct. 3.

Whoever the man was, he posed as one of the many refugees fleeing Syria’s war—including the violence of Islamic State—to enter Europe through its lightly controlled frontier in the Aegean Sea.

Greek authorities on islands such as Leros, Lesbos and Chios have confronted thousands of arrivals every day in recent months as refugees and other migrants make the short sea crossing from Turkey in inflatable boats. Short of staff and equipment, Greek police carry out only a simple procedure that involves taking people’s data and fingerprints, and sometimes asking them a few questions, before giving them permission to travel onward, deeper into Europe.

Upon his arrival in Leros, the Paris assailant was checked against police databases under his Syrian identity, Greek officials say. Nothing was found. Police on Leros didn’t spot that the passport was fake. A black market in Syrian passports has sprung up in Turkey as migrants try to gain the easiest possible entry into Europe, which has treated Syrian war refugees as more deserving of shelter in European Union countries than many other nationalities.

Reuters reported Tuesday that “German police have detained an Algerian man in a refugee reception centre in connection with the attacks in Paris.”

The Obama administration plans to admit some 10,000 Syrian refugees next year. At Saturday’s debate, Hillary Clinton and Martin O’Malley both said they’d like to make it 65,000. “Accommodating 65,000 refugees in our country today, people of 320 million, is akin to making room for 6½ more people in a baseball stadium with 32,000,” said O’Malley.

The problem, however, is not one of numbers. If even a handful of terrorists were among the 10,000 or 65,000 admitted, that would be enough to cause carnage and serious disruption. As the president himself observed during yesterday’s press conference: “When you’re talking about the ability of a handful of people . . . who are willing to die, they can kill a lot of people.”

Proponents of admitting Syrian refugees acknowledge the importance of vetting them. “Even as we accept more refugees—including Syrians—we do so only after subjecting them to rigorous screening and security checks,” Obama said in his opening statement yesterday. In the debate, Mrs. Clinton said that “we should go to 65 [thousand] but only if we have as carefully screening and vetting process as we can imagine, whatever resources it takes.”

In an interview on Mondy with radio host Hugh Hewitt, New Jersey’s Gov. Chris Christie—one of those who’ve said their states won’t accept refugees—made the obvious point in response:

“I do not trust this administration to effectively vet the people who are proposed to be coming in, in order to protect the safety and security of the American people.”

We have no specialized knowledge here, but it seems to us that Gov. Christie easily has the better of this argument. To put it mildly, administrative competence has not been the hallmark of this administration. Obama has presided over, among other things:

His administration could not even design a properly functioning website for its central ideological vanity project, the federal health-insurance exchange.

It seems crazy to place one’s faith in its ability to do better even than the Greeks in vetting refugees.

USA Today points out that the governors have little formal authority to keep the feds from resettling refugees in their state:

“The one thing I feel very comfortable saying is there is absolutely no constitutional power for a state to exclude anyone from its territories,” said Stephen Legomsky, a Washington University of St. Louis law professor and former chief counsel of U.S. Citizenship and Immigration Services in the Obama administration. . . .

The Refugee Act of 1980 requires the State Department to maintain “an effective and responsive liaison” with governors and mayors, but doesn’t give governors any formal role in resettlement.

“Most of these resettlement decisions are partnerships with churches and private organizations that are offering to resettle,” said Anna Law, a political scientist at Brooklyn College who’s studied the history of state efforts to limit immigration. “I think this is political posturing. The decision to admit refugees is made at the federal level. Whether these refugees are admitted to the United States, that is not their call.”

It’s certainly political, but resistance from governors in a majority of states—including 11 states Obama carried in 2012, and including one Democrat, Maggie Hassan of New Hampshire, who is seeking a U.S. Senate seat—it’s more than posturing. This is not just a national-security crisis but a developing political crisis for the president and his party.

Published November 17, 2015 in James Taranto’s “Best of the Web” at The Wall Street Journal website. Reprinted here Nov. 19, 2015 for educational purposes only. Visit the website at wsj .com.

1.  The purpose of an editorial/commentary is to explain, persuade, warn, criticize, entertain, praise or answer. What do you think is the purpose of James Taranto’s editorial?  Explain your answer.

3. Mr. Taranto concludes by quoting Anna Law, a political scientist at Brooklyn College who’s studied the history of state efforts to limit immigration, who said, “I think this is political posturing. The decision to admit refugees is made at the federal level. Whether these refugees are admitted to the United States, that is not their call.”

It’s certainly political, but resistance from governors in a majority of states—including 11 states Obama carried in 2012, and including one Democrat, Maggie Hassan of New Hampshire, who is seeking a U.S. Senate seat—it’s more than posturing. This is not just a national-security crisis but a developing political crisis for the president and his party.