Posted on September 26, 2019 in Thursday's Editorial 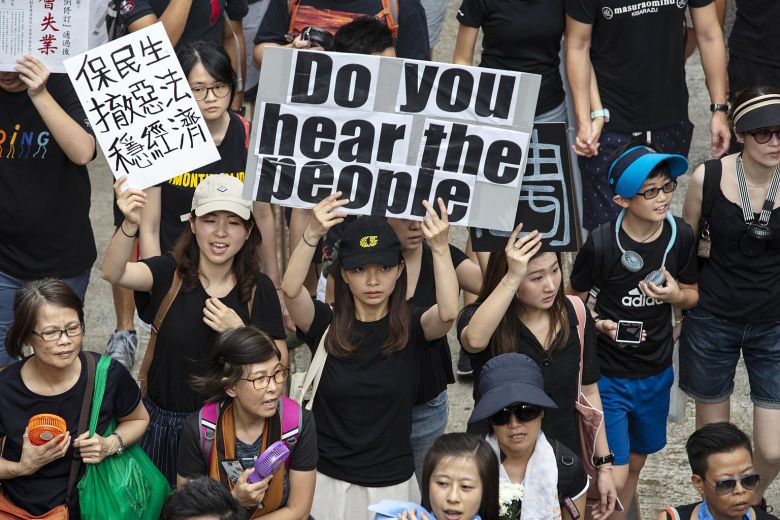 Protesters hold signs while marching during a rally in Hong Kong in June.

The 79-day “Umbrella” protest of 2014, as large as it was, had little lasting effect on Beijing, which has ruled Hong Kong as a “special administrative region” since 1997. This year’s protests are different. “China’s disintegration is now under way,” Arthur Waldron, a China historian at the University of Pennsylvania, told me last month.

In Chinese history, regimes often unravel from the outside in. “Disintegration,” Mr. Waldron told me, “begins at the limits of empire, only to grow, steadily undermining adjacent territory, until the seats of central power are imperiled.” That’s what happened in the 10th century to the mighty Tang dynasty, which, as Mr. Waldron puts it, was “mortally wounded by military disorders remote to the capital.”

Similarly, in the mid-19th century, the Qing dynasty was fatally weakened by the 14-year-long Taiping Rebellion. Starting in southern China not far from Hong Kong, the revolt—actually an attempted revolution—claimed an estimated 20 million lives and displaced tens of millions more. The Manchu Qing rulers held onto power for nearly a half-century longer but never recovered from perhaps the most destructive civil war in history.

Almost every analyst today assumes that one way or another, Beijing will prevail in the current crisis. China’s Communist Party maintains the world’s largest standing army, with more than two million personnel. Some 7,000 are already stationed in Hong Kong. The hard-core protesters dressed in black—a “guerrilla force,” according to American correspondent Michael Yon—number only in the thousands.

Yet despite appearances, Beijing is at a disadvantage. The mass of Hong Kong residents firmly oppose Beijing’s encroachments. The protests, initially over a bill that would have allowed extradition to the mainland, have widened in scope. Now the target is China itself and its effort to eliminate the “one country, two systems” arrangement that had promised Hong Kong a “high degree of autonomy.”

China’s efforts to take over Hong Kong have resulted in a shift in self-identification, especially among younger adults. A recent Hong Kong University survey shows that the share of 18- to 29-year-olds who self-identify as Hong Konger rather than Chinese or mixed has surged to about 75% from 40% a decade ago. Almost nobody in this group believes he is Chinese only. A plurality of residents of all ages now see themselves as Hong Konger only.

Changes in self-identification have fueled a still-small independence movement, which did not exist a decade ago. Whether or not Hong Kongers want to separate fully from China, Beijing has to be concerned by protesters there repeating the line from “The Hunger Games”: “If we burn, you burn with us!”

As protesters clash with police, analysts worry about another Tiananmen, the June 1989 slaughter in Beijing. Soldiers in tanks and armored personnel carriers moved to the center of the capital, killing at will.

I think Chinese leaders know that such a response is not possible this time. Hong Kong’s dense urban landscape—tall buildings and narrow roads and alleys—reduces the advantages of armor and favors defenders, who can occupy the high ground from apartment buildings. Many protesters say they’re willing to fight to the end; …

The militant demonstrators not only are determined but are becoming an effective fighting force. Mr. Yon, who has observed them from the beginning, told me the emerging contingent of youthful fighters is “breathing, growing, evolving so fast that I am having difficulty tracking its evolution.” Chinese ruler Xi Jinping surely does not want his first war to take years, kill thousands of Chinese, and end in a loss.

The authorities don’t have the ability to clear the streets, and the longer the demonstrations continue, the higher the risk they spread to the mainland. Mainlanders have already crossed the border into Hong Kong to stand with the protesters there—like one earnest young man from Guangdong province who spoke with me earlier this month in front of the Mong Kok police station. He and perhaps 1,000 Hong Kong men and women in surgical masks had squared off with riot police in Darth Vader-type helmets and visors.

The majority of mainlanders have little sympathy for Hong Kongers, but they do have grievances of their own, especially as economic growth slows and Mr. Xi enforces tighter social controls. Beijing has to be worried that ordinary Chinese will be inspired by the boldness of those in Hong Kong, who have inflicted severe political damage on Hong Kong Chief Executive Carrie Lam and forced her to announce concessions.

Protesters know Beijing is afraid of contagion and have targeted mainland tourists with messages delivered by Apple’s AirDrop app, among other means. They congregate around venues frequented by mainland tourists to press their case.

The protesters have significantly changed the political narrative in Taiwan, which Beijing also considers its rightful possession. Until the Hong Kong protests began, it looked as if a pro-Beijing figure would be elected Taiwan’s president this coming January. Now that’s unlikely. The governing Democratic Progressive Party, sometimes described as “pro-independence,” has shored up support and is expected to retain power.

There will be little for the Chinese Communist Party to celebrate Oct. 1, the 70th anniversary of the founding of the People’s Republic. Its imperial project is stalling and beginning to disintegrate along the periphery.

But refugees from China’s totalitarian rule have reason to be optimistic. A friend of mine fled Mao’s army as it approached Beijing seventy years ago, eventually ending up in New Jersey. She vowed never to return to China as long as the Communist Party ruled and had given up hope of ever going back. Last week, she told my wife she now knows she will soon return. She promises to take us to her favorite restaurant in the capital for a jiaozi dinner.

Mr. Chang is author of “The Coming Collapse of China.”

Published September 25, 2019 at wsj .com. Reprinted here SEptember 26 for educational purposes only. May not be reproduced on other websites without permission from The Wall Street Journal.

1. The purpose of an editorial/commentary is to explain, persuade, warn, criticize, entertain, praise or answer. What do you think is the purpose of Mr. Chang’s editorial? Explain your answer.