1. Symbol is defined by Merriam-Webster Dictionary as: something that stands for or suggests something else…; a visible sign of something invisible (the lion is a symbol of courage)
What does the donkey in this cartoon symbolize?

2. What is cartoonist Chip Bok implying about Democrats running for re-election in November? 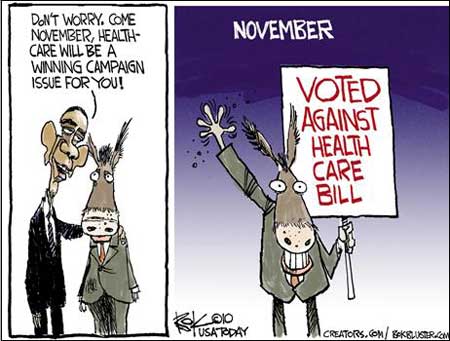 1.  The donkey symbolizes the Democratic party.

2.  Most of the Democratic members of Congress voted to pass President Obama’s healthcare reform bill, which is unpopular with the American people.  Bok is implying that the only way the Democrats can win re-election is by saying they voted against the health care reform bill.

NOTE: A recent New York Times/CBS News poll shows that more than twice as many Americans “strongly disapprove” of Obamacare (34 percent) as “strongly approve” of it (15 percent).
Politico.com has reported that Democrats are running more anti-Obamacare campaign ads than pro-Obamacare ads (three times as many).  Also, evidence suggests that Democrats who voted for the health care reform bill are not doing well in the polls, while anti-Obamacare Democrats are doing comparatively well.