Posted on May 4, 2020 in Friday's Editorial Cartoon

1. Cartoonists often use humor to illustrate a news item. What recent news item is cartoonist Al Goodwyn illustrating in this cartoon?

2. A cartoonist often uses humor to illustrate a news item. What comic device does the cartoonist use to illustrate this news story? Explain your answer.
a) caricature
b) personification
c) symbol
d) understatement
e) hyperbole

Fear-mongering is defined as: The action of deliberately arousing public fear or alarm about a particular issue. Do you think the above are examples of the media using fear-mongering? Explain your answer. 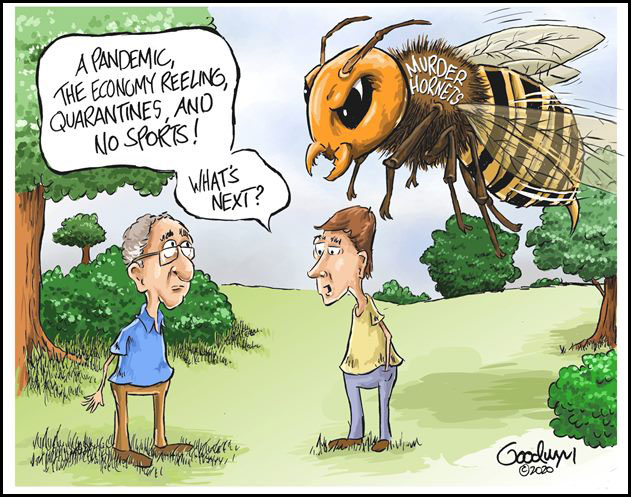 1. This cartoon refers to reports that for the first time, Asian giant hornets (aka “murder hornets”) have been spotted in the U.S., specifically in Washington state.

2. e) hyperbole: Hyperbole is an exaggerated boast, character, situation, or environment. It stretches the truth well beyond reality. The key to good hyperbole is the tone; it has to be clear to the audience that it’s an exaggeration for comedic effect.   The cartoonist uses hyperbole to exaggerate the size of the murder hornets (which are the world’s largest hornets), as well as the danger posed to humans by these hornets. (They can kill humans, but it’s rare.)