To what news item does this cartoon refer? Be specific. 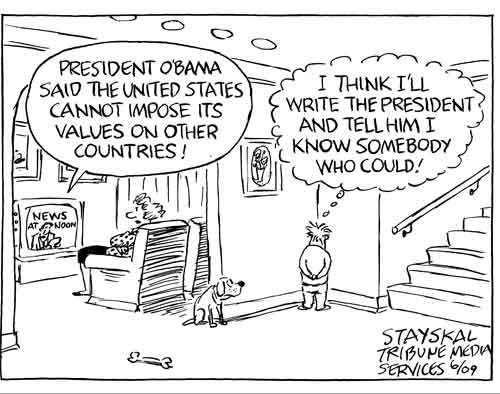 Cartoon posted with permission from the artist.

This cartoon refers to an interview President Obama had with the BBC, ahead of a visit to Saudi Arabia, Egypt and then Europe. The President said the U.S. cannot impose its values on other countries, but argued that principles such as democracy and the rule of law are universal. The President said the U.S. must lead by example – which firstly means closing the Guantanamo Bay detention camp in Cuba. He said: “The danger I think is when the U.S. or any country thinks that we can simply impose these values on another country with a different history and a different culture.”

But he stressed that “Democracy, rule of law, freedom of speech, freedom of religion – those are not simply principles of the West to be hoisted on these countries, but rather what I believe to be universal principles that they can embrace and affirm as part of their national identity.”

President Obama said he would be ‘encouraging’ countries on his trip to promote these values, but added: “I think the thing that we can do most importantly is serve as a good role model. And that’s why closing Guantanamo, from my perspective, as difficult as it is, is important. Because part of what we want to affirm to the world is that these are values that are important even when it’s hard, even especially when it’s hard, and not just when it’s easy. (from timesofindia.com)

View a video of the interview here: