To what news item does this cartoon refer? 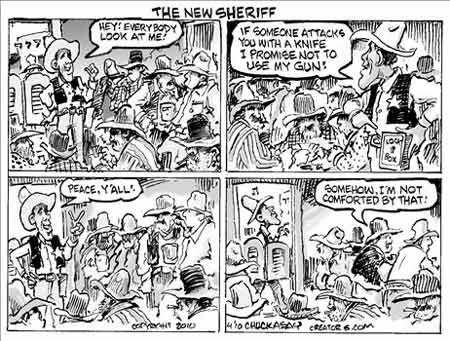 The cartoon referrs to President Obama’s recent announcement that he will not use nuclear weapons to retaliate, should the U.S. be attacked by a NATO country that does not have nuclear weapons.

[For the first time, the United States is explicitly committing not to use nuclear weapons against non-nuclear states that are in compliance with the Nuclear Nonproliferation Treaty, even if they attacked the United States with biological or chemical weapons or launched a crippling cyberattack.]

Read a recent USA Today article on this topic:  “Obama’s critics zero in on no-nukes policy“