1. How does the message of the first cartoon contrast with that of the second cartoon?

2. What do you think about the two contrasting cartoons? 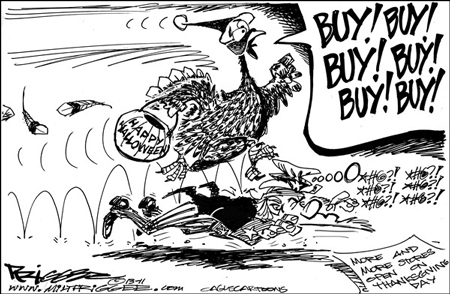 1. The first cartoon’s tone is humorous; the cartoonist points out the absurdity of the Christmas shopping season; that in our rush to find good Christmas shopping deals, we are going right from Halloween to Christmas, and run right over Thanksgiving.
The second cartoon’s tone is serious and solemn; the cartoonist attempts to remind people that we should acknowledge God and His many blessings to America, as Americans have done since the first Pilgrims came here.

(Note: Several chain stores have said they will now not only open early in the morning the day after Thanksgiving, or even on Thanksgiving night as a few had begun to do in the last few years, but will be open all day on Thanksgiving, a day that was traditionally set aside to spending the day with family and thank God for His many blessings. However, if Thanksgiving Day was not profitable, retailers wouldn’t be open.)