“Printer’s down” is a phrase typically used to state that a printer is not working. Irony is defined as: when the opposite of what you expect to happen occurs. Explain the irony in this cartoon. 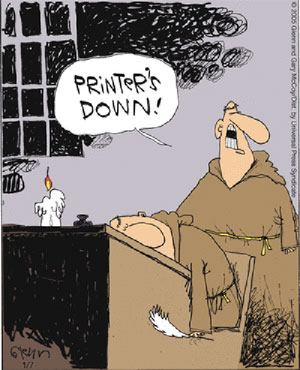 When you see the caption “Printer’s down” you expect to see an illustration of a modern office with a tech guy walking over to a laser printer to fix it.  Instead, you see a scene from the Middle Ages of a monk who was writing with a quill and ink (not even a ball point pen), working by candlelight (no electricity), being referred to as the “printer.”  During the Middle Ages monks transcribed all of the documents by hand using a quill and ink, without electric light.  Many people were not even literate at that time.