1. a) Define hyperbole and understatement.
b) Which word do you think best describes this cartoon?

2. Editorial cartoonists often use humor to make light of an event or action that aggravates them. One of the types of humor they use is irony. Irony is defined when the opposite of what you expect to happen occurs. Describe the irony in Tom Stiglich’s cartoon.

3. Do you agree with the cartoonist’s assertion about CNN? Explain your answer. 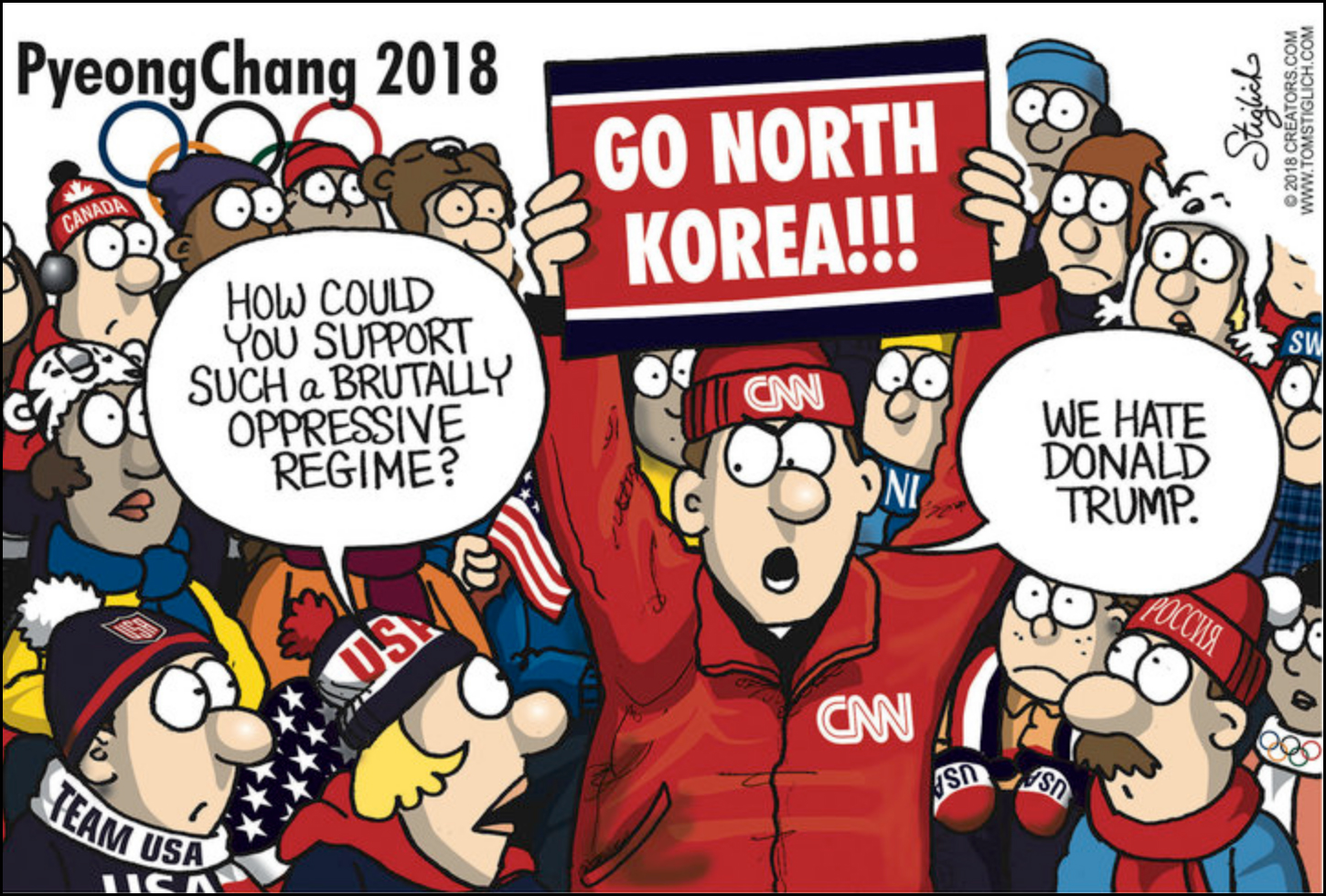 1. a)  hyperbole – an exaggeration of ideas for the sake of emphasis. (literarydevices .net)
Hyperbole is a figure of speech in which an author or speaker purposely and obviously exaggerates to an extreme. It is used for emphasis or as a way of making a description more creative and humorous. It is important to note that hyperbole is not meant to be taken literally; the audience knows it’s an exaggeration. (literaryterms .net)

b) Answer varies, depending on your point view.

2. The entire world knows Kim Jong Un is a maniacal dictator whose repressive regime starves and murders its own people. His sister is the Director of the Propaganda and Agitation Department of the Worker’s Party of Korea. You would expect the U.S. media to report accurately on North Korea’s ridiculous propaganda (which included 200 attractive, tirelessly enthusiastic cheerleaders and a delegation led by the dictator’s sister).  Instead of reporting on the fact that this was propaganda, they enthusiastically and bizarrely fawned over the cheerleaders and the sister. (See excerpts from several commentators below.)

A columnist in The Hill wrote:

Kim Yo-Jong is not a powerless dignitary or mere figurehead family member in North Korea. She is the director of the Propaganda and Agitation Department of the Worker’s Party of Korea, where she helps oversee the brainwashing and psychological terror apparatus of the North Korean state. The rush to praise the “diplomacy” of a woman whose country currently holds around 100,000 political prisoners in multi-generational concentration camps is malicious stupidity.

Would it be as satisfying to watch if viewers were aware of the torture and death that would await any of those cheerleaders and their families were they to attempt to defect while in South Korea? Would we be so enthralled with the moves if we knew the fate of anyone who makes the mistake of not delivering a perfect performance in the stands, let alone what may happen to those in competition if they don’t come home with a medal? …

There are some in the media so consumed with their rage against President Trump and his administration, they’re willing to not only whitewash the brutality of the North Korean government but promote the idea that it is somehow better than our own. …

MSNBC host Willie Geist [did not join CNN in fawning over North Korea. He] tweeted,

“I can report South Koreans here in PyeongChang are not as enthralled with Kim Yo Jong and the North Korean cheerleaders as it seems some media are back home. Something about N.K. killing, starving, imprisoning its people while threatening South Korea with nuclear annihilation.”

“If ‘diplomatic dance’ were an event at the Winter Olympics,” CNN crooned, then “Kim Jong-un’s younger sister would be favored to win gold.” And if “unctuous coverage” were an event, The Washington Post would have run away with it: Observers “marveled at her barely-there makeup and her lack of bling. They commented on her plain black outfits and simple purse,” the Post wrote. “Here she was, a political princess, but the North Korean ‘first sister’ had none of the hallmarks of power and wealth that Koreans south of the divide have come to expect.”

In comparison, The New York Times was downright perfunctory. “Flashing a sphinx-like smile and without ever speaking in public, Ms. Kim managed to outflank Mr. Trump’s envoy to the Olympics, Vice President Mike Pence, in the game of diplomatic image-making.” …

I can’t decide if the story here is that if you look good, that’s all that matters, or that some pundits have such disdain for Pence that they’d favor a family that starves and suppresses their own people over him.

She runs the propaganda operation for a Stalinist regime that holds some 130,000 political prisoners in concentration camps. …