1.  What point is the cartoonist making?

2.  Do you agree with his assertion?  Explain your answer. 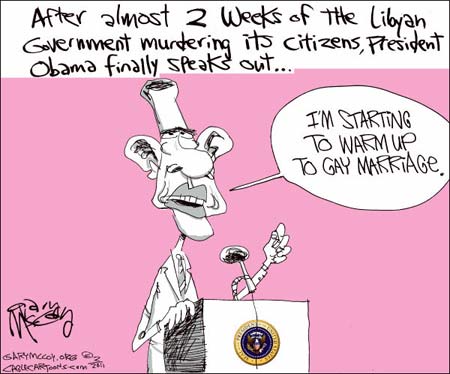 1.  Contrary to what was expected, President Obama has not spoken out against Libyan leader Moammar Gadhafi’s ordered attacks on his own people, which have killed at least hundreds thus far. Instead, the President’s latest public comments were on his decision to order his Justice Department to stop defending the Defense of Marriage Act. (see studentnewsdaily.com/daily-news-article/obama-gets-out-of-way-of-gay-marriage)

[Some say President Obama has been too soft on Gadhafi, with Washington Post editor Jackson Diehl writing that Libya “ought to be the easy case in the Middle East’s turmoil” for the White House to deal with because of the Gadhafi government’s killing of its own people. “Yet the administration so far has declined to directly condemn Gadhafi, call for his ouster, or threaten sanctions,” Diehl wrote. “Instead, it has repeated the same bland language about restraint and ‘universal rights’ that it has used to respond to the uprisings in Egypt, Bahrain, and other countries with pro-U.S. regimes.”  Read Mr. Diehl’s comments at voices.washingtonpost.com/postpartisan/2011/02/is_the_obama_administration_so.html.]