1. a) Which American city is nicknamed “Motor City”? What is this city’s other nickname?
b) How did it get the nickname Motor City?

2. To what news event does this cartoon refer? 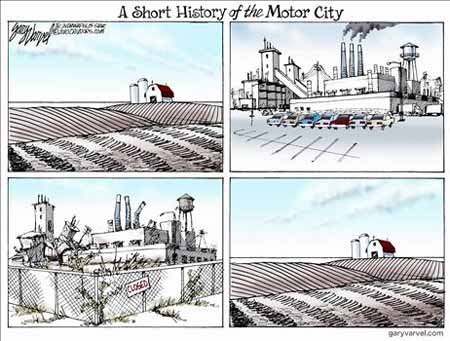 1. a) Detroit’s nickname is Motor City. Its other nickname is Motown.
b) Detroit got the nickname Motor City because it is where the automobile industry started with Henry Ford in the early 1900s. Until recently, it was one of the largest car producers and it was home to the “big three” – Ford, GM, and Chrysler.

2. This cartoon refers to the demise of the auto industry in Detroit. As automobile factories have closed, the city has deteriorated and become run-down and uninhabited in many areas. City officials are proposing that they turn the blighted areas into farmland, the way it was before all of the factories were built.

Read our March 10th Daily News Article on this topic.