2.  What is the significance of “Estamos bien” relating to the Chilean miners?

3. Tone is the attitude a cartoonist takes towards a subject. Which pair of words best describes the tone of this cartoon?
a) solemn/serious
b) joyous/elated
c) humorous/hysterical
d) grateful/appreciative 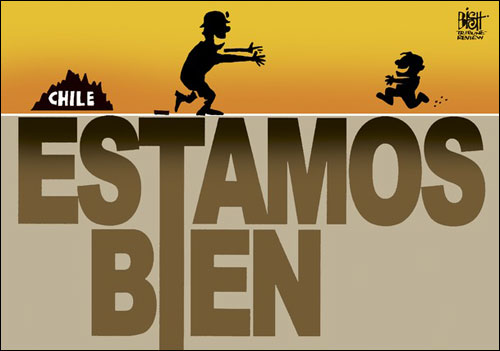 2.  After 17 days, rescue workers located the 33 trapped Chilean miners. Until then, they could only hope that the miners were alive. The first note passed up before audio communication was established read “Estamos bien in el refugio los 33” (“We are ok in the refuge – the 33”)

Watch a video of Chilean President Pinera holding up that first note from the miners [August 2010]: