2.  How does cartoonist Steve Breen view Mr. Panetta’s possible appointment by Barack Obama to become the Director of the CIA? 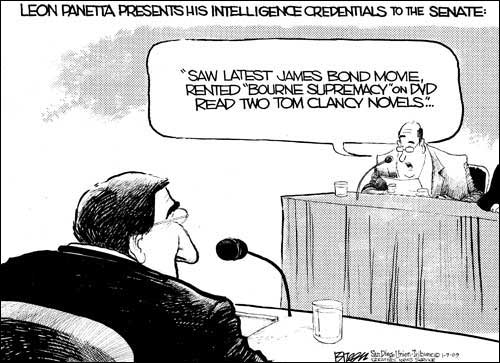 1. Leon Panetta is a Democratic politician and scholar. He served as White House Chief of Staff to Bill Clinton, and before that was a member of the United States House of Representatives from 1977 to 1993. He is the founder and director of the Panetta Institute, serves as Distinguished Scholar to the Chancellor of the California State University system and is a professor at Santa Clara University teaching public policy. It has been reported that President-elect Barack Obama will name him Director of the Central Intelligence Agency.

2. Breen thinks that Mr. Panetta is not qualified to be the Director of the CIA because he does not have experience in the intelligence field.