1. Define the word flogging as used in this cartoon.

2. To what news item does this cartoon refer? 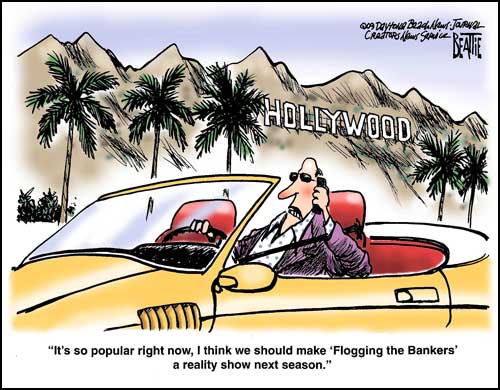 1. Merriam-Webster (m-w.com) defines flogging as:
a) to beat with or as if with a rod or whip [as punishment]b) to criticize harshly
Flogging in the cartoon is used figuratively as in b) to criticize harshly. (figurative language is speech or writing that departs from literal meaning in order to achieve a special effect or meaning)

2. Congress called CEOs of the eight largest banks in America to appear before them and explain what their companies had done with the $165 billion in bailout money they received.  Congress also summoned the CEOs to chastise them for insufficient accountability for their performance.  They were accused of not using the bailout money to make loans to Americans, while continuing to hand out millions of dollars in executive pay and bonuses.  Many people viewed the way Congress treated these men as a “public flogging.”

Watch the video at C-Span.org http://www.cspan.org/Watch/watch.aspx?MediaId=HP-A-15318.