1. To what recent news item does the first cartoon refer?

2. A cartoonist often uses humor to illustrate a news item. What comic device does Chip Bok use to highlight this news story? Explain your answer.
a) caricature
b) satire
c) symbol
d) understatement
e) hyperbole 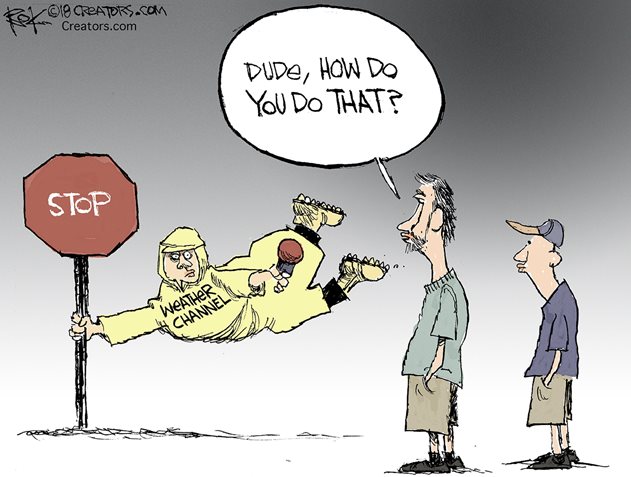 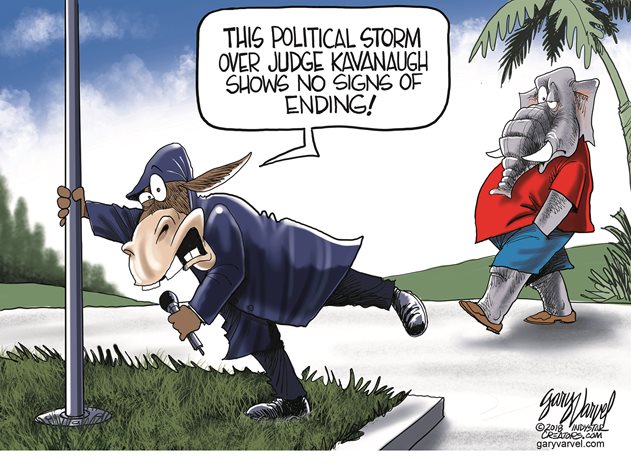 1. A veteran TV weatherman – The Weather Channel’s Mike Seidel  – appeared to be caught exaggerating his battle against gale-force winds during Hurricane Florence.  Seidel was seemingly battling to stay upright as he filmed a piece in North Carolina – as two pedestrians calmly strolled past in the background.

2. e) hyperbole: An extreme magnification or exaggeration of actuality. It blows something completely out of proportion for a distorted effect. The purpose of hyperbole is to create a larger-than-life effect and overly stress a specific point. (Used as a figure of speech in which exaggeration is used for emphasis or effect, as in “I could sleep for a year” or “This book weighs a ton”). The cartoonist here is greatly exaggerating the Weather Channel reporter’s representation of the strength of the storm while reporting on Hurricane Florence.

b) satire – satire is defined as: the use of irony, sarcasm, ridicule, or the like, in exposing, denouncing, or deriding vice, folly, etc.