Drain on the Economy

2. Do you agree with Rep. Pelosi’s assertion?  Explain your answer. 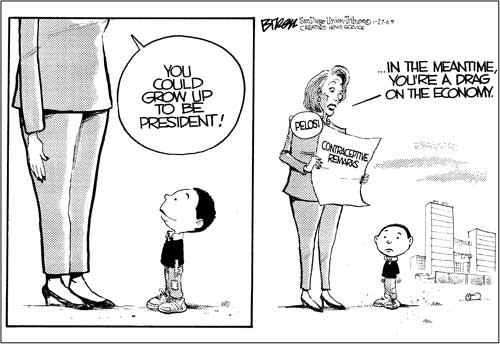 1. U.S. Speaker of the House Nancy Pelosi (D-Calif.) this week defended a move to add birth control funding to the new economic “stimulus” package, claiming “contraception will reduce costs to the states and to the federal government” because funding children’s health, education and other programs costs a lot of money. Her remarks are taken to mean that children cost the government a lot of money, and that if people use birth control they will have less kids, therefore saving the government money.

Reacting to Rep. Pelosi’s remarks, the editors at OpinionJournal.com said: “The notion that a larger population will produce a lower standard of living can be traced to the 18th-century economist Thomas Malthus. But during Malthus’s own lifetime, his prediction was proved false, as he later acknowledged. Population and living standards rose simultaneously, and have continued to do so.”  Read the editorial at opinionjournal.com.