1.  Identify the two people in the cartoon.

2.  What point is the cartoonist making? 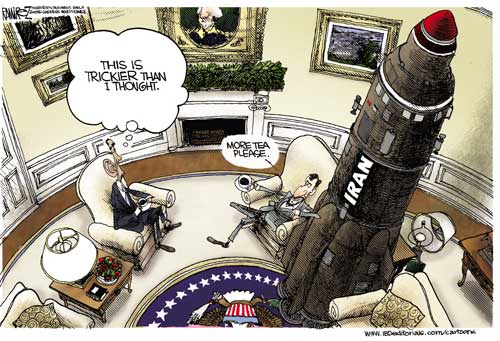 2.  Barack Obama has said that as president, he would meet unconditionally with rogue states like Iran.  Ramirez’s point is that meeting with Ahmadinejad will not persuade him to give up his nuclear weapons program.

From the Obama/Biden website:
Barack Obama will pursue tough, direct diplomacy without preconditions to end the threat from Iran:  Obama and Biden will present the Iranian regime with a clear choice. If Iran abandons its nuclear program and support for terrorism, they would offer incentives like membership in the World Trade Organization. If Iran continues its troubling behavior, Obama and Biden will step up our economic pressure and political isolation. (from origin.barackobama.com/issues/foreign_policy.)