To what ongoing news story does this cartoon refer?

NOTE TO STUDENTS:
People have opposing views about the probability that man’s use of fossil fuels (gas, oil, coal) will cause catastrophic climate change.

Many issues can be controversial. While you might not feel strongly about a certain topic, others around you might take a strong position on one side or the other. Learn to logically defend your position, and politely respect your neighbor’s point of view. And if your neighbor gets argumentative with you, remind each other that both sides need to be tolerant of the other’s point of view. 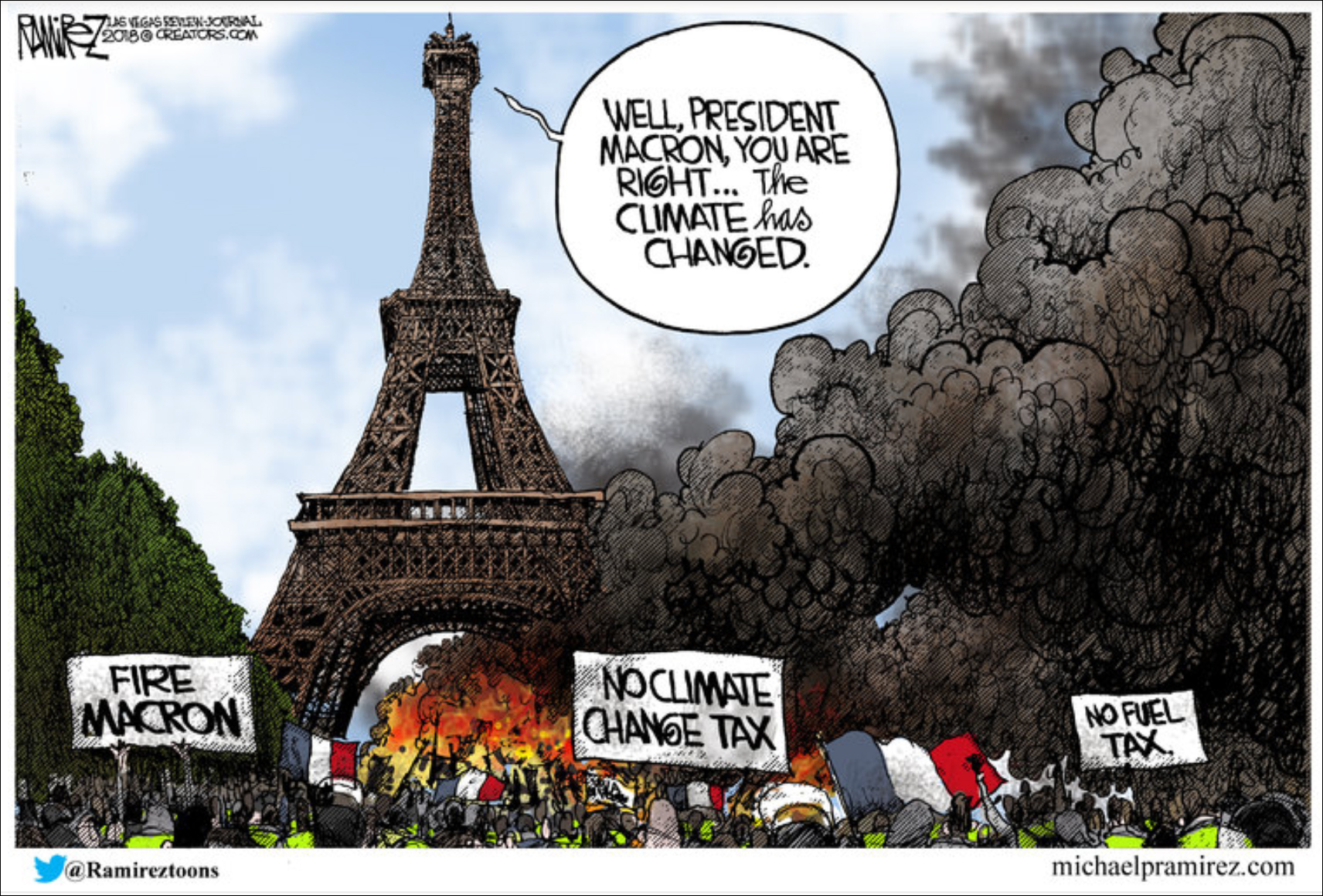 For weeks, the French people have been protesting President Emmanuel Macron’s climate change fuel tax that he has implemented to get people to stop using fossil fuels (gas, oil, coal). The fuel taxes were meant to go into effect in January as part of France’s plan to fight global warming.

Thousands of protesters called “yellow vests” took to the streets to protest the carbon taxes, which would have added 33 cents to a gallon of diesel and 17 cents for a gallon of gasoline. (“Yellow vests” refer to the fact that all motorists are required by law to carry a yellow vest in their vehicle.)

Taxes already make up about 60 percent of the price of fuel in France. The average cost of gas in France runs about $7 per gallon. (Macron’s government already raised carbon taxes on fuel earlier this year.)

Global warming is an important issue to understand.

The theory that man’s use of fossil fuels (burning coal, oil and gas for energy, which produces carbon dioxide, or CO2) is causing an imminent catastrophic change in the climate – global warming – is believed to be true by many scientists, climatologists, citizens, the mainstream media and Hollywood celebrities, and was made popular by former Vice President Al Gore’s movie “An Inconvenient Truth.”  People who believe in this theory say we must reduce the amount of carbon dioxide produced by limiting/reducing the amount of fossil fuels we use, or by purchasing offsets.

The belief that man’s activities are not causing an imminent catastrophic change in the climate is held by many other scientists (see MIT’s Professor of Meteorology Dr. Richard Lindzen’s commentary in Newsweek here). This view is very unpopular in the media and widely condemned by those who believe man-made global warming is fact. See Newsweek magazine’s online presentation “The Global Warming Deniers” here.  Those who do not believe man is causing the global temperature to rise don’t believe it is necessary to reduce the production of CO2 by reducing our use of fossil fuels or to purchase carbon offsets.

Read a commentary on Global Warming at studentnewsdaily.com/commentary/global-warming-update.