A cartoonist often uses exaggeration to make a point. What point is the cartoonist making through exaggeration?
a) Reacting to a cartoon with violence is ridiculous
b) Cartoon characters should not be made fun of
c) Cartoons should be banned as they may result in worldwide violence
d) Cartoons that joke about Mohammad should be banned
e) Israeli Prime Minister Netanyahu was attempting to mock cartoonists
f) Jihadists were offended by Israeli Prime Minister Netanyahu’s cartoon 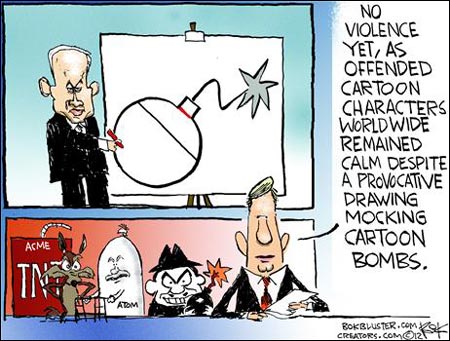 a) Reacting to a cartoon with violence is ridiculous

Israeli Prime Minister Benjamin Netanyahu brought a visual aid with him to the United Nations General Assembly on September 27, 2012: