1. Editorial cartoonists often use humor to illustrate something that they find aggravating. What point is the cartoonist making in these cartoons?

2. An editorial cartoon reflects a cartoonist’s point of view and though it generally exaggerates reality, an editorial cartoon should be based on truth or fact.  Read the “Background” below.  Do you think the cartoonist’s assertion about the hypocrisy of the elected officials’ actions is accurate and/or justified? Explain your answer. 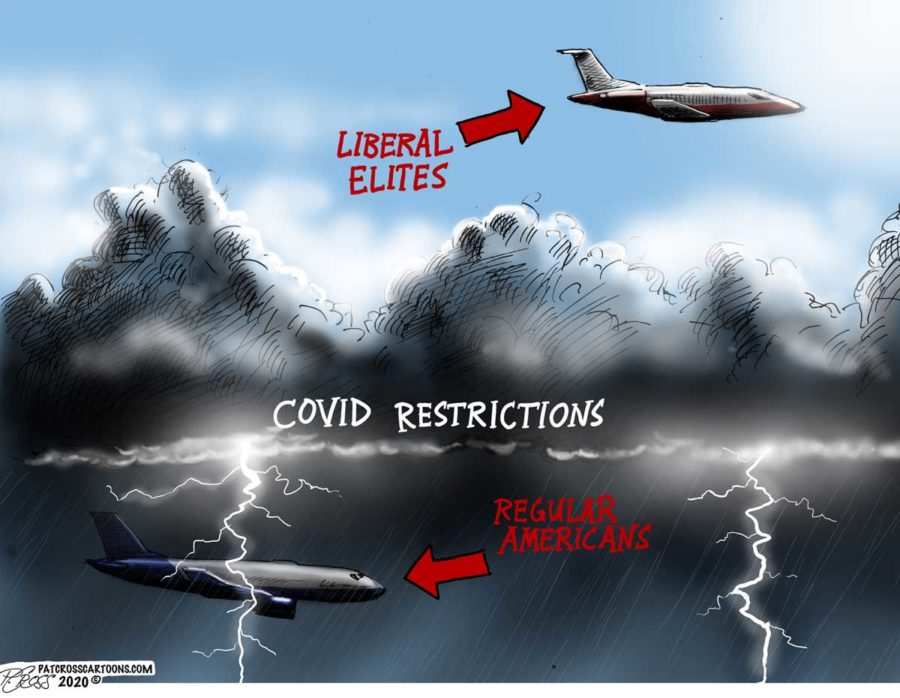 From an editorial published on Dec. 3 at nypost:

Democratic governor of California Gavin Newsom — Governor Newsom attended a birthday party for a friend at Michelin-starred (fine-dining/super expensive) restaurant French Laundry.  He was only caught because someone took a picture of Newsom’s table, after which the governor said “while our family followed the restaurant’s health protocols and took safety precautions, we should have modeled better behavior and not joined the dinner.”

Democratic mayor of San Francisco London Breed — French Laundry is apparently the Achilles Heel of Democrats. Breed also attended a birthday there on another night. Three days after eating in the Napa Valley restaurant, she banned all indoor dining in San Francisco. This week, Breed said, “The truth is we’re going to have to take more restrictive action and it pains me to say that.”  Restrictive action for those who don’t have the resources to leave the city and find places with a $450-per-person dinner menu.

Democratic senator from California Dianne Feinstein — “Research shows that masks reduce transmission of the coronavirus,” she said in July. “Wearing masks in public should be mandatory. Period.”  Feinstein, 87, has been spotted a number of times speaking to colleagues at the Capitol without wearing a mask.

Democratic mayor of Denver Michael Hancock — “With the continued rise in cases, I’m urging you to refrain from travel this Thanksgiving holiday. For my family that means cancelling our traditional gathering of our extended family,” Hancock wrote in an e-mail to his city staff.

But they didn’t cancel. Just after the e-mail, Hancock flew to Mississippi to spend Thanksgiving with his daughter.  After a fierce backlash, Hancock, admitted that “ my decision was unwise and hypocritical — a mistake that I want to deeply apologize for. My job as Mayor is to not only help come up with safe practices for the entire city. It’s also to set an example, and on that measure, I failed.”

Democratic mayor of Austin, Texas Steve Adler — “We need to stay home if you can,” Adler told his constituents in November via Facebook video. “This is not the time to relax. We are going to be looking really closely. . . . We may have to close things down if we are not careful.”

Except Adler recorded this message in Cabo San Lucas, Mexico, where he was vacationing at the family timeshare — after having attended the wedding of his daughter at an Austin hotel with 20 guests.  Though his own health officials recommended no more than 10 people in groups at the time, Adler claimed all the guests had rapid COVID-19 tests, an excuse not granted to the people he represents.

Democratic Los Angeles County Supervisor Sheila Kuehl — This week, she voted to ban outdoor dining in Los Angeles County. Hours later, she was eating outdoors at a Santa Monica restaurant.  “She did dine al fresco at Il Forno on the very last day it was permissible,” her spokesman said to local TV station Fox 11. “She loves Il Forno, has been saddened to see it, like so many restaurants, suffer from a decline in revenue. She ate there, taking appropriate precautions, and sadly will not dine there again until our Public Health Orders permit.”

“I’m like wait a minute, restaurants are so dangerous, but you’re gonna go eat in a restaurant?” Josiah Citrin, who owns restaurants in the LA area, told the station. “I mean it just blows me away.”

Democratic mayor of Philadelphia Jim Kenney — What, your own policies prevent dining in the city you govern? No problem, just travel out of town to eat indoors in Chesapeake Bay (Maryland), as Kenney did in August.

“Hi @phillymayor!!!” wrote Philadelphia chef Marc Vetri. “Glad you’re enjoying indoor dining with no social distancing or mask wearing in Maryland tonight while restaurants here in Philly close, suffer and fight for every nickel just to survive. I guess all your press briefings and your narrative of unsafe indoor dining don’t apply to you. Thank you for clearing it all up for us tonight.”

Democratic governor of New York Andrew Cuomo — After bemoaning how families couldn’t be together for Thanksgiving, Gov. Cuomo casually mentioned that two of his daughters and his 89-year-old mother would be joining him for the holiday.  “Do as I say, not as I do,” Rep. Elise Stefanik (R-NY) tweeted. “Family for me, but none for you.”

Cuomo is one of the only ones on this list who was found out before he was a hypocrite. He canceled the dinner — but why did it take a backlash for him to realize what was wrong?

Liberal CNN host Chris Cuomo — CNN’s top COVID lecturer was bashed by his own landlord for failing to wear a mask in common areas. Even as the anchor was bashing President Trump for not wearing one during events.

An August letter to Cuomo from his landlord said, “You have been observed entering and exiting the building and riding the elevator without the required face coverings. Even though staff members have asked you to comply with this requirement, you have refused to do so. This is a violation of the Executive Order, building policy, and places other residents and our staff at risk. There are no exceptions to this rule, and you are required to comply.”

Democratic mayor of Chicago Lori Lightfoot — Yes, social distancing is important — unless it’s a street party for Joe Biden’s victory. That’s essential. Mayor Lightfoot, having her hair done and joining in a riotous Joe Biden victory celebration in violation of her own restrictions — then having the gall to call her actions “essential activities.” – “There are times when we actually do need to have a relief and come together,” Lightfoot told MSNBC when called out on her hypocrisy. “And I felt like that was one of those times. That crowd was gathered whether I was there or not. But this has been a super hard year on everyone.”

Democratic Speaker of the House Nancy Pelosi (California) —While San Francisco shut down businesses in draconian fashion, Pelosi was caught, maskless, getting her hair styled. At the time, salons were only allowed to offer outdoor services.   Pelosi’s ’do was done by an independent stylist without the knowledge of salon owner Erica Kious, who described it as “a slap in the face that she went in, you know, that she feels that she can just go and get her stuff done while no one else can go in, and I can’t work.”  Pelosi’s response? “It was clearly a setup,” she whined. “This salon owes me an apology.”

1. Elected officials across the country have placed covid restrictions on the public, while in many instances flaunting their regulations and doing exactly what they prohibit the citizens from doing.