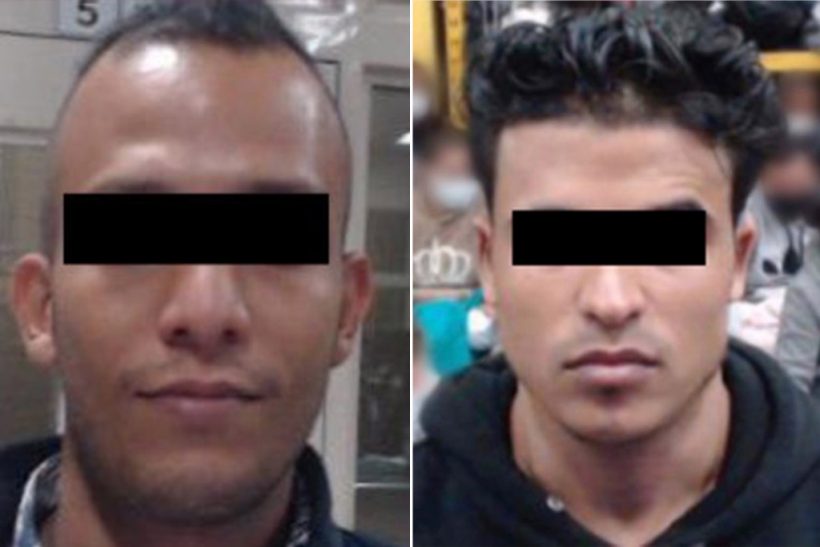 The two terror suspects from Yemen, arrested for illegally entering the U.S. at different times. CBP refuses to identify them and only posted these photos with their eyes blacked out on the since deleted press release page.

(Compiled from The Washington Times and NY Post) — CBP, as part of the Department of Homeland Security has removed the press release announcing the arrest of two Yemeni men on the terrorist watch list.

The release was posted Monday, but by Tuesday morning it was no longer available. The CBP page for the press release now reads “Access denied. You are not authorized to access this page.” An archived version is still available at the Internet Archive/Wayback machine.

CBP spokesman Justin Long told the NY Post on Tuesday officials deleted the release because it “was not properly reviewed and contained certain disclosure and policy information related to national security.”

The terrorist watchlist includes people who are “known to be or reasonably suspected of being involved in terrorist activities,” according to the FBI.

“Why did you take down your previously public tweet & press release announcing that two people on the terror watch list were apprehended exploiting President Biden’s open border policies?” demanded the Republicans on the House Homeland Security Committee.

“Transparency in name alone is not transparency,” said the Republicans, who are led by ranking member Rep. John Katko.

Customs and Border Protection (CBP), which oversees the Border Patrol and is part of the Department of Homeland Security, didn’t respond to multiple inquiries.

The Border Patrol announced in Monday’s press release that agents had arrested one Yemeni man last week near Calexico, California.  The 26-year-old was found to be on both the FBI’s terrorism watch list and the no-fly list.

The other man, also from Yemen, was arrested near Calexico, California, early in the morning on Jan. 29. That 33-year-old was also on both the watch list and the no-fly list.

CBD did not release the identities of the men.

The revelations confirmed something Congressman Katko had said during a border trip last month, when he told reporters agents had said they were arresting terrorism suspects amid the migrant surge.

Democrats and immigrant-rights activists had mocked that suggestion.

At the White House on Tuesday, Biden’s press secretary Jen Psaki acknowledged terrorism suspects do jump the border, but she said “these types of incidents are very uncommon.”

She also said the fact that the ones in question were caught is testament that Border Patrol agents are “doing their jobs.”

Compiled from articles published at washingtontimes .com by Stephen Dinan and from NY Post. Reprinted here for educational purposes only. May not be reproduced on other websites without permission.

2. a) For what reason did CBP delete the press release on the recent arrests of two terrorists who illegally entered the U.S. on our now open southern border?
b) What do you think of this explanation?

3. How did Customs and Border Protection (CBP) respond to multiple inquiries about the deletion of the press release?

4. For what reason are people placed on the terrorist watchlist?

5. a) What had Republican Rep. John Katko, a member of the House Homeland Security Committee told reporters during a trip to the border last month?
b) How did Democrats and undocumented rights activists react to Congressman Katko’s concerns?

6. a) What response did President Biden’s press secretary Jen Psaki have when asked about terrorists sneaking into the U.S. through our open southern border?
b) Based on Psaki’s response, what question(s) should reporters ask?

7. Read the press release on the Yemeni terrorists that CBP deleted, which is still visible at archive.org.

a) Where was each man caught?
b) What is additionally concerning about the 33-year-old terror suspect arrested on Jan. 29?

8. Read the “Background” below the questions. Do you think Republican Rep. McCarthy is raising valid concerns? Do you think the Biden administration is taking a serious approach to the issue of terrorists sneaking into the U.S. over our southern border? Explain your answer.

From an April 7 NYPost report:

House Minority Leader Kevin McCarthy (R-Calif.) has requested a classified briefing from the FBI and CIA on the arrest of two Yemeni nationals on the terror watchlist who illegally crossed the border amid the record migrant surge.

“I hope [Vice President Harris], along with Congressional leaders, could benefit from this briefing,” the California lawmaker said, noting that the vice president was tasked by President Biden with addressing the diplomatic measures related to the border crisis.

The top-ranking House Republican went on to share some of the intel provided to him by Customs and Border Protection agents during his visit to the region last month, noting,

“[A]gents conveyed to us that they have apprehended individuals from not only Mexico and Central America, but also countries including China, Iran, Yemen, and Turkey.”

“While I am grateful to the Border Patrol for doing all they can, I have great concern about the number of bad actors that have escaped arrest and are residing in the United States,” he warned. “We simply have no way of knowing if other terrorists have crossed the border undetected.”

Vice President Kamala Harris was appointed on March 24 by President Biden to “lead efforts” to stem the crisis on the southern border — but she still has not visited the crossing nor has she held a press conference. President Biden named Harris to head up the diplomatic effort to reach out to the leaders of Mexico and the Central American countries about the flood of migrants, saying she “speaks for me.”

So far the vice president has only phoned Guatemalan President Alejando Giammattei and Mexico’s Andrés Manuel López Obrador to discuss the “root causes” of the crisis.

In her first two weeks as czar, she has traveled to Connecticut, Chicago and home to California over the Easter weekend and has presided over swearing in ceremonies, touted the administration’s coronavirus stimulus package and the COVID response, visited vaccination sites, lunched with the president, attended a Cabinet meeting, and held listening sessions with faith leaders and small business owners, her public schedule showed.

Asked at the White House briefing Wednesday about when Harris might travel to the border, press secretary Jen Psaki said there were no trips on the schedule.